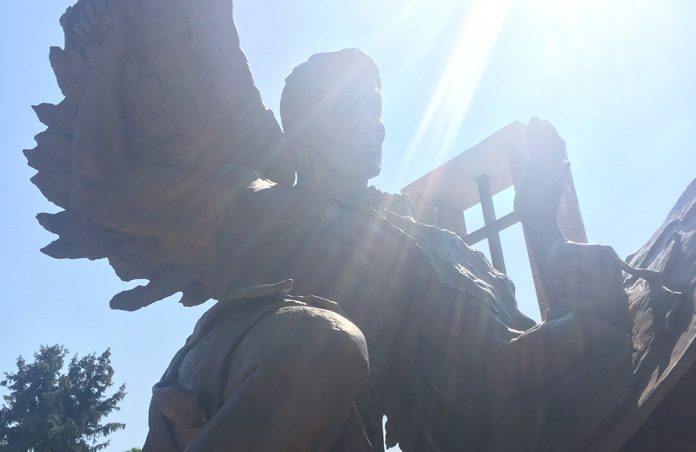 St. John XXIII Parish in Fort Collins recently unveiled and blessed a 12 ft. statue of Saint Michael the Archangel. The parish commissioned Herb Mignery, a Catholic artist who has a special devotion to St. Michael, to sculpt the statue. The project started in 2018 when St. John XXIII pastor Father Rocco Porter had seen the four ft. statue in St. Elizabeth Ann Seton Parish. That is when he knew the representation of St. Michael had to be placed in the plaza of the new parish project, which is part of a larger capital campaign.

By the grace of God, Father Porter was led to Mignery by Luke Hecker, Capital Campaign Manager for St. John XXIII, who has been friends with the artist for years. For Father Porter and the parishioners, the statue is there to remind people of the daily spiritual battle against Satan and the darkness. The statue is a fulfillment of the vision Pope Leo XIII had when he penned the prayer of St. Michael in 1884.

As the St. Michael statue was blessed by Father Porter, he reminded parishioners that when the church blesses and presents a statue for public veneration, it is for the faithful “To look at those who have followed Christ faithfully and become motivated to seek the city that is to come… That we will learn the way that will enable us most surely to attain complete union with Christ. That as we struggle along with our earthly cares, we will be mindful of the saints, those friends and those co-heirs of Christ who are also our own brothers and sisters.”

Mignery also said a couple of words regarding the statue in the miracle of the foam that happened long ago when he was working on his first statue of St. Michael.

“This miracle of the foam that happened 20 years ago concerning this piece has nothing to do with me as an artist or as a Christian,” Mignery said. “It has no reflection on my professional life, it determines in no way, one way or the other, the quality of my art and the artistic importance of my art. It was simply a case of God finding the perfect opportunity for manifesting in material form the presence and the existence of St. Michael. So for that reason, I don’t take credit in many ways for this because I was guided very well by the Spirit, by God, and St. Michael.”

Mignery has worked as a bronze statue sculptor for years and his works have been recognized and are seen across the country. It seems, however, that all those statues created by him pale in comparison to the meaning and creation of the St. Michael statue. Mignery is actually a Catholic convert and believes that God put him on this Earth to sculpt these statues that bring into a physical representation the powerful Prince of the Archangels.

The bronze statue is currently placed at the entrance of the church and displays the majesty of God through his creation of the holy angels. St. Michael, standing tall with a sword and shield, is pushing back Lucifer and his minions. On his belt buckle, in Latin, is written the phrase “Et Impetum, Impetum Est,” meaning “Attack or be attacked,” referring to the spiritual battle that we fight with our prayers.

Father Porter encouraged the parishioners to pick up their weapon which is the rosary and pray so that they can help St. Michael in the battle against evil.

“It’s so important that we are in attack mode, not in defense mode, because when you get into the defense, it’s easy to be pushed back,” he said. “We need to be always ready to fight in the spiritual battle.”

Currently, there is a hold on the original plans for the Undeniable Presence Campaign, where a new church, as well as a Catholic dormitory for students, were planned to be built. Due to COVID, the developer they were working with was forced to downsize. Father Porter, along with Hecker and those working on the campaign found it imprudent to continue with the project for the time being. However, there are possible plans to open a women’s crisis healthcare clinic next door to the parish. There is a smaller St. Michael statue replica that is being sold by St. John XXIII in which all proceeds will go to the funding of the clinic.

Even though the capital campaign is not continuing on the original track for the time being, Hecker, along with Father Porter, think it’s great to open a clinic since we are living in times where life and families are being threatened.

“That’s why we have our plan and God has his plan,” Hecker said “This Catholic women’s health care clinic is what I think God is putting out in front of John XXIII, The Archdiocese of Denver, [and[ Catholic Charites saying, ‘Build this, this is the battle where lives are being lost.’”