His Church. Our Experience.
Subscribe
HomeLocalFrom a can of expanding foam to a ‘Piazza of Angels’
LocalParish News

From a can of expanding foam to a ‘Piazza of Angels’ 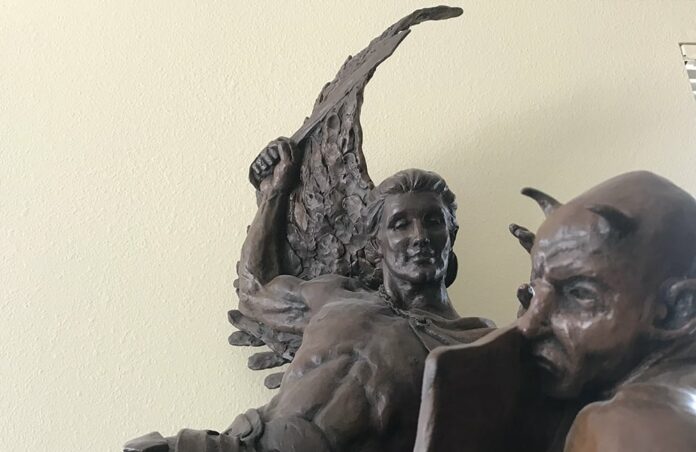 Last year, Father Rocco Porter, pastor at St. John XXII Church in Fort Collins, introduced the Undeniable Presence capital campaign, a five-year project that will shape the future of countless CSU students and the Catholic community in Fort Collins. Included in the ambitious project will be the construction of a new church that will be located just in front of the west side of the Colorado State University campus.

Over the past few years, the increase in student participation at St. John XXIII Parish has created a lack of space to evangelize students through the various ministries the parish offers. The new church will not only create an undeniable presence of God on the campus, but will also provide more and better resources for the evangelization of students.

The new St. John XXIII church will be constructed in a traditional Romanesque-style and a Catholic student housing building will also be built in the property. The beauty of the new church will be key in the mission of attracting students to the Catholic community.

Outside the church, there will be a large plaza with a water fountain where a statue of Saint Michael the Archangel will be placed. This is the saint to whom Father Porter decided to dedicate the success of this project and who has guided them since day one.

When Father Porter decided to place a statue of Saint Michael the Archangel in the plaza of the new church, he never imagined the wonderful testimony he was going to witness. After a long hunt for the right sculpture and several conversations with people in his community, he found the perfect piece for his church. This was how he learned about Herb Mignery, the artist and creator of the art piece.

“I could’ve picked the statue from anywhere else in the world and probably have to travel somewhere to go find and meet the sculpture, but God led me to the one that was right here in Fort Collins the whole time, just waiting to be seen and to be used for this project,” Father Porter said.

In 1997, St. Michael’s Catholic Church in Nebraska hired Mignery to build a sculpture of Saint Michael the Archangel that would be placed in that same church. According to Mignery, after spending days forming and building the draft piece of St. Michael drawing the demons out of heaven, he felt that perhaps the image could be too violent for parishioners at the church, so he thought of redoing the sculpture portraying St. Michael in a harmless standing position with his sword by his side. However, something strange happened that made Mignery continue with his initial idea.

Mignery usually forms the interior of his sculptures with pieces of Styrofoam that stick together using expanding foam from a can. When the foam expands, it becomes a firm material which can be used to carve different figures and then apply clay to its surfaces. This foam is a very common material that Mignery would typically leave around his work area. Sometimes, the can would seep a small amount of foam, not larger than a golf ball.

One morning, while deciding on the design of the sculpture, he found something surprising. The foam can had exploded and the foam had formed a clear image of Saint Michael the Archangel fighting the demons.

“I arrived one morning to find a can which had been placed at the base of the sculpture had seeped an image approximately 12” by 12”… The real surprise came, however, when I suddenly realized it was an eerie image of my sculpture of St. Michael in action,” said Mignery.

After seeing this, he decided to return to his original idea, and resumed his project of the active St. Michael of the Archangel expelling the demons.

Once the sculpture was finished, it was stored in several places until it made it to St. Elizabeth Ann Seton Parish in Fort Collins, where Luke Hecker, Capital Campaign Manager, and Father Porter, found the missing piece for their new church. Shortly after finding the sculpture, Father Porter contacted Mignery and after putting the pieces together, they decided that the sculpture had to be placed the plaza of the new church of St. John XXIII. Mignery not only agreed that his piece of art belonged to St. John XXIII, he also gifted the piece of exploded foam to Father Rocco and his parish.

For Hecker, the sculpture of St. Michael represents more than just an ornament for the church. It’s the light in the midst of darkness that is present to defeat the evil.

“When I look at this statue, it’s God telling us that the light overcomes the darkness,” Hecker said.

Both Hecker and Father Porter envision conveying a message of hope to students who enter the church through what will be the “Piazza of Angels,” a shelter where they will be protected by God and where evil has no place.

“[We hope] that when students come through the doors and they see St. Michael, they feel his presence here, that they recognize that this is holy ground that is divinely protected by God and that they’re safe here,” Hecker said. “This is a Catholic community where God can form their souls in his image and likeness and they can engage in genuine, real friendship with others young men and women their age and enjoy this sacramental friendship.”