Doubling down on a bad deal 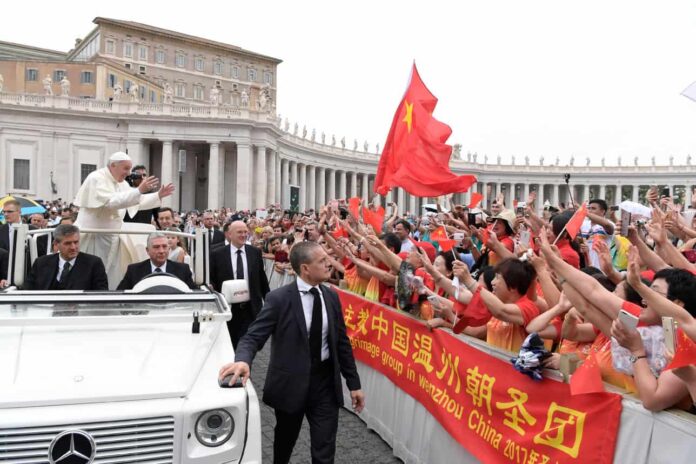 Perseverance on a difficult but noble path is a virtue. Stubbornness when confronted by irrefutable evidence of a grave mistake is a vice. The latter would seem an apt characterization of a letter sent on Ash Wednesday to the entire College of Cardinals by its new Dean, Cardinal Giovanni Battista Re. In that letter — his first official act as Dean — Cardinal Re reprimands the redoubtable Cardinal Joseph Zen, SDB, emeritus bishop of Hong Kong, for his criticisms of the agreement the Vatican made with the People’s Republic of China in 2018.

The bloom is off the Chinese rose just about everywhere in the world. So it is more than disturbing that the Holy See should be doubling down on what everyone (except those directly involved in cutting it) thinks is a very bad deal: bad, because it allows the Chinese Communist Party to nominate candidates for bishop, which the Holy See can then approve or reject.

Why is the bloom off the Chinese rose? Why are China and its “model” no longer lauded in the global commentariat? The initial Chinese mishandling (and worse) of COVID-19, the coronavirus, has had an impact. Before anyone had heard of COVID-19, however, there was mounting concern about the intentions and brutality of the Chinese communist regime: about its herding Uighurs into concentration camps; about its assaults on religious communities, including the defacing and demolition of Catholic churches after the accord with the Holy See was signed; about its aggressive military moves in the South China Sea; about its creation of an Orwellian internal security apparatus through facial-recognition technology; about its ranking the Chinese citizenry according to their political reliability (meaning their acquiescence to what the Chinese Communist Party dictates); about its international espionage, often conducted behind the cover of putatively independent technology companies like Huawei; about its relentless digital attacks on Taiwan; and about the global Chinese “Belt-and-Road” initiative, which financially shackles Third World countries to the Beijing regime.

Yet nary a public word has been spoken by Vatican diplomacy about any of this.

What is most disturbing about Cardinal Re’s letter, however, is its claim that the 2018 Vatican-China agreement is in continuity with the diplomacy of John Paul II and Benedict XVI. To my understanding, that is simply not right — or at best, it’s a distortion of the historical record in service to defending what can’t be defended on the merits.

Yes, John Paul II and Benedict XVI sought ways to unite the Church in China. But neither was prepared to do so at the expense of the Church’s right to order its internal life by Catholic criteria. Both John Paul II and Benedict XVI could have had a deal in which the Chinese government would propose candidates for bishop, which the Vatican would then accept or veto. Both popes declined to accept any such arrangement, not only because it contradicted the teaching of Vatican II in its Decree on the Pastoral Office of the Bishops in the Church and Canon 377.5 of the Code of Canon Law, but because they knew that that concession would weaken the Church’s evangelical mission in China. The deal Cardinal Re defends is not in a line of continuity with the policy of John Paul II and Benedict XVI: it is an even worse deal than the deal those popes would not make. For it concedes nominating power to the Chinese Community Party, which manages religious affairs in China, not the Chinese government. And that is, in a word, intolerable.

Cardinal Re’s defense of the indefensible is a last gasp of the old Vatican Ostpolitik, the failed policy of making concessions to totalitarian regimes that did much damage to the Church in east central Europe during the 1970s. Italian Vatican diplomats still defend that policy, claiming absurdly that it set the table for the Revolution of 1989 and the fall of the Berlin Wall. But what did the Ostpolitik actually accomplish? It made the Hungarian hierarchy a wholly-owned subsidiary of the Hungarian Communist Party, gutting the Church’s evangelical credibility in the process. It demoralized Catholicism in what was then Czechoslovakia. It put unnecessary pressure on the Church in Poland. And it facilitated the deep penetration of the Vatican by communist secret intelligence services.

Cardinal Re’s letter laments that the path forward for the Catholic Church in China is difficult and complex. Who could doubt it? That path is not made easier, however, by making unbecoming concessions to thugs — or by calling out fellow-cardinals who challenge the 2018 Vatican-China deal because it does precisely that.