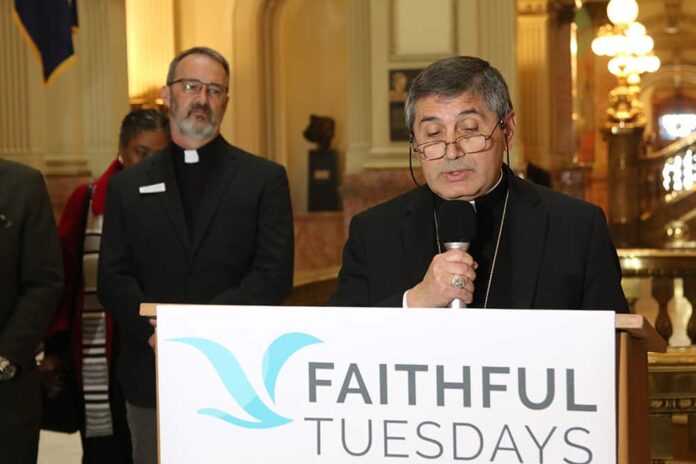 In an attempt to add a deeper moral dimension to the public policy making in Colorado, leaders from different religious institutions in the state, including the Auxiliary Bishop of Denver Jorge Rodriguez, gathered Feb. 5 at the Colorado State Capitol to commence the Faithful Tuesdays program, which will host different religious leaders throughout the 2019 legislative session of the Colorado General Assembly to address topics seeking the advancement of a collaborative process in support for a just economy, equity and the eradication of racism.

The event gathered the presence of the Colorado Catholic Conference, the Colorado Council of Churches, Interfaith Alliance of Colorado, Together Colorado and leaders from different faiths.

Bishop Rodriguez, who spoke on the eradication of racism, called the topic “a very timely subject,” referring to the recent pastoral letter against racism released by the USCCB under the title Open Wide Our Hearts – The Enduring Call to Love; and said that this eradication was in part a duty of all religious leaders.

“Racism is a sin that divides the human family and violates human dignity.  As faith leaders we are called to be consistent voices calling for the eradication of racism in our communities,” Bishop Rodriguez said.  “We all have a duty to recognize that our various faith traditions call on us to break down the walls created by the evils of racism, whether that evil is displayed publicly for all to see or buried deep in the recesses of our hearts.  If we don’t heed this call, we are destined for history to continue to repeat itself.”

The USCCB pastoral letter states: “Racism arises when — either consciously or unconsciously — a person holds that his or her own race or ethnicity is superior, and therefore judges persons of other races or ethnicities as inferior and unworthy of equal regard. When this conviction or attitude leads individuals or groups to exclude, ridicule, mistreat, or unjustly discriminate against persons on the basis of their race or ethnicity, it is sinful. Racist acts are sinful because they violate justice. They reveal a failure to acknowledge the human dignity of the persons offended, to recognize them as the neighbors Christ calls us to love (Mt 22:39).”

Bishop Rodriguez underlined that in order to respond appropriately to this problem, it is necessary to listen to those who have experienced it first hand, whose story would not only convince religious leaders of its reality, but also allow them to promote justice with empathy.

“We must create occasions to hear, with open hearts, the tragic stories that are deeply engraved on the lives of our brothers and sisters, if we are to be moved with empathy to promote justice,” he said. “Racism is a moral problem that requires a moral remedy – a transformation of the human heart – that compels us to act.  The power of this type of transformation will be a strong catalyst in eliminating those injustices that impinge on human dignity.”

Quoting the USCCB pastoral letter, Bishop Rodriguez called to mind the leadership of Martin Luther King, Jr., in the civil rights movement, which brought together Catholics, Protestants and Jews — and called on all people of faith to continue in the same tradition.

“It is my prayer that all people of good will join together to strive for the eradication of racism in all its forms,” he concluded. “For there is no place for racism in the hearts of any person; it is a perversion of the Lord’s will for men and women, all of who were made in God’s likeness and image.”

Jenny Kraska, Executive Director of the Colorado Catholic Conference (CCC), told the Denver Catholic that in the fight for the dignity of life from conception to natural death, the CCC also fights for the rights of those in life who “fall through the cracks.”

“It’s [about] promoting the dignity of every human person… A lot of the legislation that we’re focused on looks at the lives of immigrants in our community, the lives of those who are most in need, homeless people,” Kraska said. “I think sometimes people in those segments in society fall through the cracks, and it’s up to us as a faith community to show legislators that every human life has dignity.”

Rabbi Joseph Black from Temple Emanuel in Denver spoke on moral economy and emphasized the need for people of faith to speak up against such injustices in society.

“As people of faith we see the world from a prism of relationships… We believe that it is important to live in community and that our lives are intertwined. And as a result, we are responsible for one another,” he said. “To state that we are people of faith means that we are compelled and commanded to speak whenever we see injustice… that we cannot be silent when we see inequities in housing, employment, wages, healthcare, childcare and a myriad of other ills that plague our city, states and nation.”

Bishop Jerry Demmer, from the Greater Metro Denver Ministerial Alliance, spoke about equity referring to the image of Lady Justice and the Book of Revelation.

“Lady Justice has often been depicted as wearing a blind fold. The blind fold represents impartiality, the idea that justice should be applied without regard to wealth, power or even status,” he said. “To have true equity we have to understand what the Bible teaches. And the Bible lets us know in Revelation 7:9, John said, ‘I saw a number that no man can number of all races, kindreds, tongues and nations of people.’ So, when we begin to understand equity, we understand that we have to come together and work together as one people, and then we understand what real equity is.”

The following Tuesday meetings will take place at the Colorado State Capital from noon to 1 p.m. and will address criminal justice, the death penalty and homelessness, respectively.