WYD Panama: Youth accepted the challenge of being God’s influencers 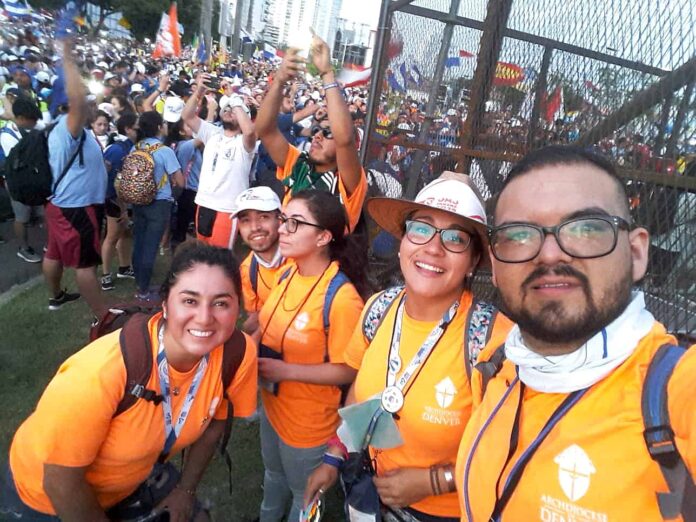 World Youth Day Panama 2019 may have only just concluded, but its fruits are already manifesting. Attendees’ faces reflect the happiness of having experienced a life-changing event.

“It was the best experience of my life”; “It will remain in me forever”; “I left in love with God.” These were just a few of the experiences expressed by some of the 300 pilgrims from the Archdiocese of Denver who attended WYD.

Some of these young people stayed in contact with the Denver Catholic throughout the entire trip to share with us their lived experience in Panama.

“How good it is to get together again, this time in a land that receives us with such radiance and warmth! As we gather in Panama, World Youth Day is once more a celebration, a celebration of joy and hope for the whole Church and, for the world, a witness of faith,” said Pope Francis to the youth at the welcome ceremony and opening of World Youth Day that was held at Campo Santa María la Antigua.

The emotion of praising our Father is so strong that we were all together regardless of sex, skin color, accent, cultures, etc.”

The pope reminded the attendees of the importance of unity: “We know that the father of lies, the devil, always prefers people who are divided and quarrelling,” he said. “He is the master of division, and he is afraid of people who have learned to work together. This is a criterion for distinguishing people: those who build bridges and those who build walls. The builders of walls seek to sow fear and make people afraid. But you want to be bridge builders!”

“Pope Francis with his love and affection motivates us, a new generation tired of society’s actions, afraid of becoming adults and becoming part of the problems we now face,” said Daniel Palomino, one of the Colorado pilgrims and parishioners of Our Lady Mother of the Church in Commerce City.

WYD pilgrims had a day full of activities, and Auxiliary Bishop of Denver Jorge Rodríguez joined attendees from the archdiocese. After the Eucharist, the young people visited the Park of Forgiveness, a park assigned for confessions, where they were received by a group of priests and volunteers who invited the pilgrims to do an examination of conscience and encouraged them with joy at the end of the confession. “The emotion of praising our Father is so strong that we were all together regardless of sex, skin color, accent, cultures, etc.,” said pilgrim Patricia Gonzalez, parishioner of Queen of Peace parish. “At the Park of Forgiveness, we [were] given the opportunity to visit the vocational fair. There were about 300 religious communities offering information. Hundreds of young people enjoyed this.”

Vigil with the young people. The moments before the meeting with the pope were described by pilgrims as: “Four long hours of waiting, heat, suffocation, panic attacks and/or claustrophobia, and many frustrated and annoyed young people.” However, all of that “disappeared with the first sentence of [Pope Francis’] speech. It suffices only with the breath of God the Father through his faithful servants to bring us peace.”

The pilgrims expressed the emotions they felt to see the pope’s concern for the needs of the Church, the countries and the common home. “He invited us to remain friendly, to be young people who smile and who reflect the love of Jesus. He invited us to transmit the message of unity and peace. He invited us to start a new phase as young Catholics, in which we not only defend our religion but also defend and respect our common home — the house that God gave to us and that we are destroying,” Palomino said.

Pope Francis with his love and affection motivates us, a new generation tired of society’s actions, afraid of becoming adults and becoming part of the problems we now face.”

The pope spoke to the young people in their own language, giving them a speech in which he referred to Mary as the “influencer of God,” referencing Mary’s “yes” to God.

“That was how he surprised Mary and asked her to be part of this love story,” Pope Francis told the youth. “Obviously, the young woman of Nazareth was not part of the ‘social networks’ of the time.  She was not an ‘influencer,’ but without wanting or trying to, she became the most influential woman in history.”

During the closing Mass, which had an attendance of approximately 700,000, the pope invited the young people to follow Mary’s example of saying “yes” to the mission entrusted to them by God and assured them that Our Lady accompanies them in their journey. This message was very well received by the youth of the Archdiocese of Denver, who, together with the Bishop Rodríguez, returned home more motivated and with a heart burning in faith.

“There is no doubt that Pope Francis knows how to connect with young people. And it is evident that they are ready to accept their challenge of a holy, happy and committed life,” Bishop Rodríguez said. “WYD Panama is proving it! Our young people in Denver have turned this experience into a feast of faith and have renewed their enthusiasm for Pope Francis.”