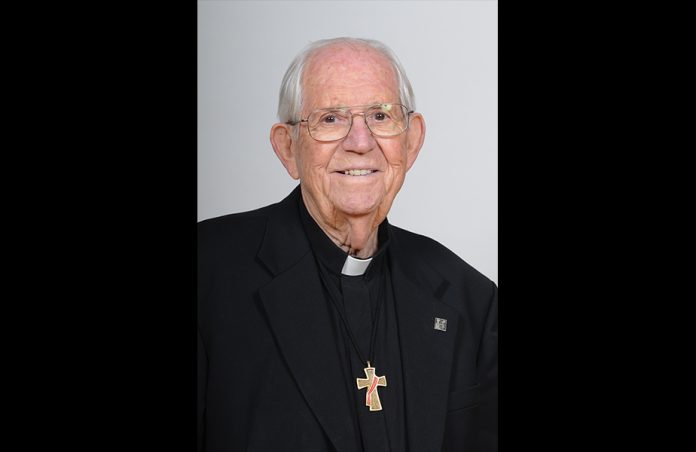 Deacon Robert Haigh, 98 years old, passed away on Dec. 7. Deacon Robert was assigned to St. John the Evangelist in Loveland, Colo., for his entire ministry.  He retired from active ministry in 1998.

Robert Leo Haigh was born on Aug. 24,1923, to Louis Leo and Viola Pearl Haigh in Fort Madison, Iowa.  He was baptized at St. Joseph parish in Ft. Madison on Aug. 24, 1923.  The family lived across the Mississippi River from Ft. Madison in the town of Niota, Ill. Niota is where Robert was raised and grew up.  He would commute over to St. Joseph school where he received his First Communion and Confirmation Sacraments.  In 1943, Robert was drafted into the U.S. Army and served overseas in Europe during World War II as a Civil Engineering Technician.  He was honorably discharged in 1946.

He went back to Niota and married is girlfriend, Geraldine (Gerry) Luegering at the same parish where Robert was baptized. The two were married on May 11, 1946.  That same year, he became a “tool and die” apprentice with W.A. Schaeffer Pen Company. Soon after, he and Gerry adopted two great boys, Hal and Phil.  The couple also had two wonderful grandchildren in Heather and Troy and 2 great grandchildren.  Then in 1964, the family moved to Colorado, and he began a Tool and Die position with Hewlett Packard where he continued to work for 22 years. In September 1985, his beloved wife, Gerry, passed away from cancer.  Robert would subsequently retire from his management job in the Tool and Die Department of Hewlett Packard.

Developing a love for intense prayer, God began to call Robert to a more intense diaconal pursuit.  This call became even stronger after his wife had passed away.  On May 25, 1991, at the Cathedral Basilica of the Immaculate Conception, in Denver, Colo., Archbishop Francis Stafford laid hands on Deacon Haigh at his ordination to the Diaconate.  Archbishop immediately assigned him to St. John the Evangelist where he continued to minister beyond his retirement until 2014.  Due to his life experiences, Deacon Haigh had a particular love for the elderly and lonely.  In his ministry, he would seek out those on the peripheries and invite them into a pleasant conversation.

“Deacon Robert was an open and honest man that developed strength through spiritual prayer and diaconal ministry. Meeting this gracious man brought a peaceful joy to those he encountered,” said Deacon Joseph Donohoe, Director of Deacon Personnel. “He was a bright light where darkness was conquered through his yearning for the love of Our Lord.”

A Funeral Vigil was held at Viegut Funeral Home in Loveland, Colo. on Dec. 14.  A Mass of Christian Burial was conducted by Bishop Jorge H. Rodriguez Dec. 15 at St. John the Evangelist Parish with burial services being conducted immediately afterwards at Resthaven Memorial Gardens in Ft. Collins, Colo.