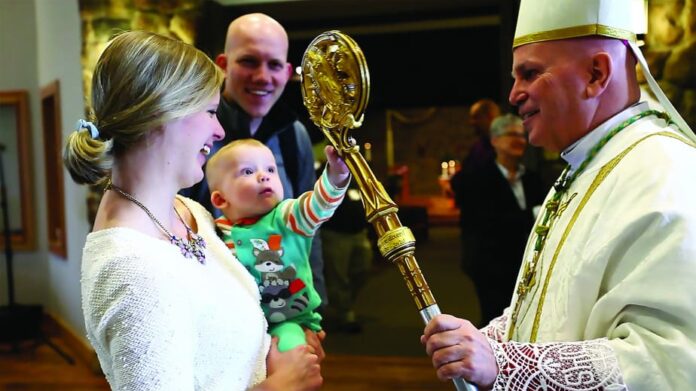 Two weeks ago I issued a statement saying that I would study Pope Francis’ apostolic exhortation, “Amoris Laetitia,” or “The Joy of Love.” As I’ve made my way through it, I have been struck by his intimate awareness of the beauty of marriage in the Scriptures, the desire people have to live out Christian marriage, the struggles of modern family life, and finally, his deep desire to renew marriage in the light of the Gospel. Beyond any of the debates that have been taking place about the exhortation, promoting this renewal seems to be the essential message of the Pope.

Pope Francis covers a lot of ground in the 250-plus pages of “Amoris Laetitia.” He encourages people to read it carefully and patiently. He begins with a reflection on the nature and gift of marriage found in the Word of God and then moves to an analysis of the present situation of marriage. His examination includes a consideration of the reasons why many young people are turning away from marriage, why marriages are experiencing difficulty, and what is happening in marital law around the world.

At the root of these changes, in the assessment of the Synod Fathers and the Pope, is an individualistic culture that promotes self-centeredness and a lack of generosity or self-sacrifice for others. This results in an experience that I hear of often. The Synod Fathers described it as “loneliness, arising from the absence of God in a person’s life and the fragility of relationships” (AL, 43).

Today’s self-centered, “me first” orientation breaks off relationships as soon as they seem burdensome or no longer useful. This worldview, in turn, encourages relativistic attitudes that wound relationships, especially marriage and family life – the most fundamental component of society. Relativism convinces people that perhaps nothing is universally true. The Holy Father sees this belief as giving momentum to several destructive forces, including the “legal deconstruction of the family,” the failure to help the vulnerable, and the unequal treatment of women (cf. AL 47, 53, 54).

Once he has offered this cultural analysis, Pope Francis spends chapter 3 presenting the Church’s teaching on marriage, drawing on the teachings of his predecessors. In chapter 4, the Holy Father gives families everywhere a Bible study on 1 Corinthians 13, St. Paul’s famous reflection on love. As many others have said, this reflection is beautiful and contains insights that can deepen the faith life of every member of the family.  I encourage every married couple to prayerfully read the fourth chapter together.

Over the next three chapters, the Pope delves further into the role of love in the family. In chapter 5 he reflects on the gift of children. In chapter 6 he offers ways to improve preparation for engaged couples, support marriages in their early years, and how to accompany the divorced and single parents. In chapter 7 he addresses the need to provide children with an education rooted in our Catholic faith and to form their hearts so they can live moral and ethical lives in Christ. All parents should read this chapter with great care.

Chapter 8 has generated the most discussion among theologians, on blogs, and in the media. Scholars and the faithful have been analyzing this chapter on helping those who have experienced divorce or other tragedies in their marriages, and they have come up with widely differing interpretations. This outcome points to a weakness in this chapter, namely, a lack of precision in its language that people could use to wrongly justify sinful behavior.

However, it would be a mistake to read this chapter as a break with the Church’s teaching, equating the Pope’s compassionate spirit with a license to ignore the truth. The way to interpret it correctly is in continuity with previous magisterial teaching, especially Vatican II and Pope St. John Paul II’s “Familiaris Consortio.” Seen in this context, Chapter 8 offers an explanation of one possible way to accompany people on their journey from the slavery to sin to the freedom of God’s children.

The Holy Father first speaks about consciences, saying that they need to be formed not replaced (cf. AL, 37). In light of this principle, pastors should present the truth about marriage in a loving and transformative way, beginning with an introduction to the saving love of Christ, rather than laying out norms. This type of encounter begins the right kind of pastoral dialogue and creates an openness in people to the Gospel of marriage in its fullness (cf. AL 293, 297).

Pope Francis also speaks about the importance of moral truths not being “merely an ideal to be achieved in the future” (FC, 34; cf. AL 295, 300). He clearly states that, “if someone flaunts an objective sin… [s]uch a person needs to listen once more to the Gospel message and its call to conversion” (AL, 297). The discernment that accompanies the weak “can never prescind from the Gospel’s demands of truth and charity, as proposed by the Church” (AL, 300; emphasis added).

One example of where these principles are used is the case of divorced and remarried couples. It is possible that a person has objectively committed a sin but is not guilty of it, given their lack of awareness of Church teaching and other mitigating factors. I have found this myself in working with divorced and remarried people and young people who, through no fault of their own, do not know Christ, the Gospel, or why the Church teaches what she does. I have known young people who have shared with me their experience of one priest telling them some behavior was perfectly fine, while another priest called their actions sinful.

Pope Francis reminds bishops and priests that it is important in these situations for them to take a pastoral approach, beginning with where the person is coming from and leading them to the truth in the way that Jesus did with the Samaritan woman. Only in that face to face conversation, with patience, love, mercy and truth will the heart and conscience be awakened to embrace the truth in charity, to hear the voice of God. Few priests or bishops would argue against such a pastoral approach to these difficult situations.

At the same time, a priest or bishop can never condone sin, for as the Lord tells us, “If you love me, you will keep my commandments (Jn. 14:15).” Furthermore, the proper formation of conscience must always be guided by Sacred Scripture, the Catechism of the Catholic Church, and testing the voice heard against the voice of God given in revelation and the teaching of the Church.

Scholars will surely debate the meaning of aspects of this exhortation, and rightly so. But as that debate occurs, I urge you to imitate St. Teresa of Avila, who said: “Let nothing disturb you, let nothing frighten you, all things are passing away: God never changes.”

The world is in desperate need of beautiful, uplifting witnesses of faithful marriage. I see this being lived by young couples today who have been formed by a personal encounter with Jesus Christ, a love for the Gospel and the teachings of the Church, and an open heart to the sacramental life of the Church, most especially the Eucharist and Reconciliation, which sustain their married love.

The relentless search for new and different relationships is a sign of the real hunger people have for the communion of Trinitarian love for which they were created. This can only be totally satisfied by an authentic, total gift of self to Christ and in sacramental marriage that is open to the fruit of children. May the outpouring of the gifts of the Holy Spirit and a renewed commitment by the Church to bring Christ’s love and truth to families bring about the fulfillment of this desire.