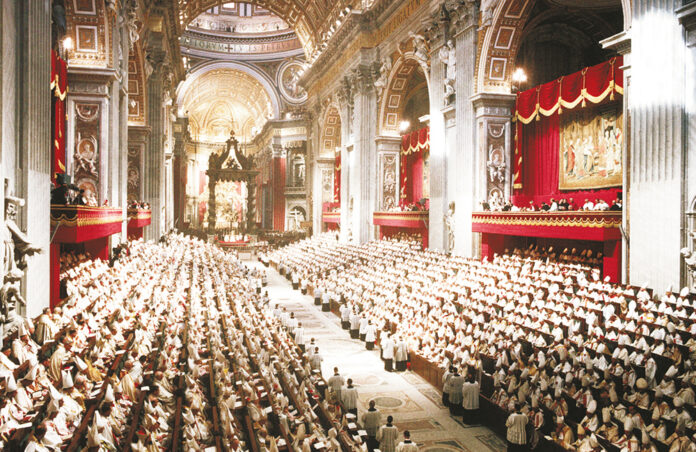 The Second Vatican Council’s Pastoral Constitution on the Church in the Modern World (often referenced by its Latin title, Gaudium et Spes) is typically regarded as the most “progressive” of the 16 documents of Vatican II: the conciliar text that bespoke a new Catholic embrace of modernity while aligning the Church with liberal democratic political forces throughout the world.

Like every other conciliar document, however, the Pastoral Constitution only comes into clear focus when it’s read through the prism of the council’s two most authoritative texts, the Dogmatic Constitution on Divine Revelation (Dei Verbum) and the Dogmatic Constitution on the Church (Lumen Gentium). Dei Verbum taught that God really does speak to humanity in history, and that the revelation of God’s intention for humanity, definitively manifest in Jesus Christ, is binding for all time. Lumen Gentium taught that the Church is a “sacrament” or “sign and instrument….of communion with God and unity among all men,” The Church embodies that by heeding the Great Commission: by proclaiming and living the Gospel of Jesus Christ, thus bringing the truth about God and us to the whole world.

That, according to the two fundamental documents of Vatican II, is the best thing the Church can do for the modern world: evangelize it. Everything else flows from that.

There were to be no exceptions to the scope of the Church’s evangelization. So the council taught that public life, including the tangled world of politics, was a field to be evangelized and thereby revitalized with the leaven of Christian truth. That meant, in the main, lay Catholics working in the public space to promote the dignity of the human person and the common good.

Gaudium et Spes had a lot to say about the Christian responsibility to contribute to the common good, about which it took a broad view: by the “common good,” Vatican II meant not just a prosperous economy, environmental protections, proper health care, and the legal protection of basic human rights, but the ongoing pursuit of a social order characterized by truth, justice, virtue, solidarity, and mutual responsibility. Meeting that responsibility to advance the common good, the council taught, required Catholics to lead coherent lives. The Pastoral Constitution therefore reminded the people of the Church that “it is a mistake to think that, because we have here no lasting city, but seek the city which is to come, we are entitled to shirk our earthly responsibilities.” There could be no such shirking, for “by our faith, we are bound all the more to fulfill these responsibilities according to the vocation of each.”

Thus life in politics, which the council described as a “difficult yet noble art,” ought to be lived as a vocation by Catholics. And there could be no bifurcation in living out that vocation, or indeed any other. “One of the gravest errors of our time is the dichotomy between the faith which many profess and the practice of their daily lives.” The prophets of the Old Testament had “vehemently denounced this scandal,” Gaudium et Spes noted, as did Christ himself, who “with greater force threatened it with severe punishment.” There could be no “pernicious opposition” between a Catholic’s “professional and social activity,” on the one hand, and his or her “religious life,” on the other.

Coherently Catholic public officials, whose faith illuminates the truths that make for human flourishing and who integrate those truths into their political lives, are the Catholics who best reflect the Church’s intention to “establish and consolidate the human community according to the law of God.” Catholics who promote or who refuse to take effective action against grave offenses against human dignity (among which Gaudium et Spes listed abortion, euthanasia, and violations of the human person through mutilation) not only fail to contribute to the common good while doing severe damage to society; they also declare themselves incoherent Catholics, who are, objectively, not in full communion with the Church.

Their fellow-Catholics among the laity have an obligation to bring this challenge of coherence to the attention of these brethren in Christ. So do their pastors.