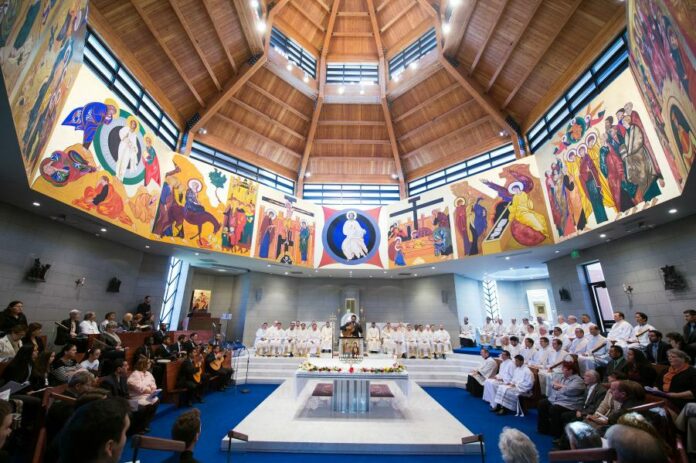 During the closing Mass of World Youth Day in 1993, Pope Saint John Paul II charged the young people of the world “to go, in the power of the Holy Spirit, to those who are near and those who are far away” and “share with them the freedom you have found in Christ.” Little did the Holy Father know that by these words, seeds were planted for what blossom into Redemptoris Mater Missionary Seminary in Denver.

The archdiocese has been immensely blessed with the presence and ministry of Redemptoris Mater Seminary,” said Archbishop Samuel J. Aquila. “The seminarians from the Way have enriched our archdiocese with their numerous cultures, their deep faith, and their willingness to serve the Church in northern Colorado and anywhere in the world. I am continually edified by the missionary hearts that I see in these young men. We celebrate their 20 years here with gratitude to the Father and the joy of the Gospel!”

Ripples from the past

It was that providential visit by Pope Saint John Paul II in 1993 that set the path for these past 20 years.

Inspired by the visit of the Holy Father, then Archbishop Francis J. Stafford asked to open a Redemptoris Mater seminary in Denver. Three years later, on March 25, 1996, he signed the decree of erection, and the first group of seminarians arrived, along with the rector, Father Florián Martín and the vice rector, Father Angel Molina. The men initially lived with host families in the Neocatechumenal Way before Redemptoris Mater was moved permanently into the original structure of the former St. Thomas Seminary. On March 25, 1999, the seminary was canonically erected by Archbishop Charles J. Chaput.

Over the seminary’s life, generous benefactors have made possible several structural expansions and additions to Redemptoris Mater. May 2004 marked the completion of seven classrooms, 12 new bedrooms and a chapel dedicated to prayerful study of the word of God, called the Sanctuary of the Word. In 2010, the kitchen, refectory, atrium and seminary chapel dedicated to the Holy Family of Nazareth were all completed.

Though he wasn’t present at the seminary’s onset, the seed for Father Tobías Rodríguez-Lasa to become rector of Redemptoris Mater was also planted at that World Youth Day.

Father Rodríguez-Lasa travelled to Denver from Spain with a group of youth to see the Holy Father. He wasn’t even considering the priesthood at that time, but his time in Denver changed that. Now, 20 years later, Father Rodríguez-Lasa is witnessing first-hand the effects of that visit, both in his own life and in that of Redemptoris Mater.

“That 1993 visit of Saint John Paul II has had ripples in our lives today, 20-some years later,” he said. “It’s good to see the enduring effects of that World Youth Day here. At the time, nobody could envision what Redemptoris Mater would have accomplished 20 years later.”

Father Rodríguez-Lasa was installed as rector of Redemptoris Mater in January 2013, replacing Father Martín, who was reassigned to the Redemptois Mater Seminary in Rome. Father Martín had served as rector since the seminary’s opening in 1996.

“Our formation is geared not only to train men to do ministry in Colorado, but also to be available to go wherever the Church may need them,” said Father Rodríguez-Lasa.

“Experience has shown us that one good way to do this is by pulling men from all different cultures, languages and backgrounds and make them live together,” Father Rodriguez-Lasa said.

To cultivate the mission spirit of the seminary, the studies of the seminarians are halted midway through their formation and they are sent out into the world for one or two years at a time to do mission work.

Four of the priests ordained from Redemptoris Mater are currently on mission in different parts of the nation and world, in Philadelphia, Mexico, Rome and South Africa.

Besides the missionary aspect, another important facet that makes Redemptoris Mater unique is its relationship to the Neocatechumenal Way.

“All the vocations in the seminary come from a community in the Neocatechumenal Way from somewhere in the world,” Father Franchomme said. “That’s the roots of this tree.”

Faith is something deeper that is underneath, that forms the substratum, like a root that you need to grow into. That is why together with the priestly formation we need to grow into this Christian formation, this itinerary of faith. We do this through the community.”

When a man enters the seminary, he is formed as a priest. However, Father Rodríguez-Lasa and Father Franchomme clarified that specific priestly formation is different from Christian formation, that is, an individual’s spiritual growth as a Christian. As such, each seminarian is connected to a local Neocatechumenal Way community where they can continue their individual journey of faith, and the seminarians’ formation schedule at Redemptoris Mater is structured in such a way that their studies and other activities do not conflict with their involvement in the community. It is an essential element of their formation as priests, the men said.

“The seminary gives us the opportunity to be formed to serve as priests, but it presupposes faith,” Father Franchomme explained. “Faith is something deeper that is underneath, that forms the substratum, like a root that you need to grow into. That is why together with the priestly formation we need to grow into this Christian formation, this itinerary of faith. We do this through the community.”

To celebrate their 20th anniversary, Archbishop Aquila presided a special celebration in Redemptoris Mater’s Holy Family Chapel on April 3, Divine Mercy Sunday. The chapel was filled to capacity with priests and friends of the seminary.

Looking back on the 20 years Redemptoris Mater has been open, Father Rodríguez-Lasa feels that it is a beautiful example of God taking a seemingly poor and little reality and giving it growth beyond anything anyone could have imagined, all of which can be traced back to Pope Saint John Paul II’s visit to Denver in 1993.

“God has confirmed that initial vision that was the fruit of the visit of John Paul II in 1993,” Father Rodríguez-Lasa said. “To celebrate these 20 years is to celebrate the goodness and faithfulness of God, and to somehow open our eyes to this project that God has in Colorado.”