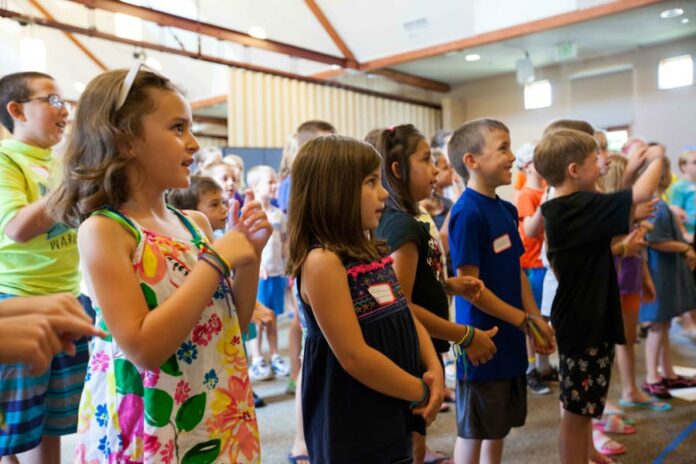 Even though the summer break should be a time for young gentlemen to take their leisure, middle schooler John Call decided to devote nearly a week of his to theology. He attended Totus Tuus for the first time at Our Lady of the Valley in Windsor. He said he spent the week with other children learning about Jesus.

“Totus Tuus is a program for kids to learn more about Jesus in a fun way,” he said.

The phrase “Totus Tuus” has its etymological roots in the Latin for “totally yours”, which was the heraldic motto of Pope St. John Paul II’s pontificate. College students and seminarians involved with the program agree to spend their summer break traveling to various parishes, forming the children of these estates in the fundamentals of the faith.
There are also water fights.
Young Master Call said that there were many aspects of the retreat that captured his fancy, including everything from Christology to Patristics.
“[I came here] to learn a little bit more about Jesus and how he got to the crucifixion, how he prayed and how powerful he is,” Call said. “We learned all the types of prayer and we learned the definition of the Our Father.”

He said he enjoyed instruction, but was equally appreciative for the opportunities for daily Mass and breaks for refreshments. He also enjoyed singing The Little White Box Song.
“It’s songs, and learning, and learning how to sing good,” he said.
He said that both the amusements and the opportunities for society were ample.
“I’ve made exactly, like, three friends in a total of five days,” he said.

The brevity of the experience was a point he repeatedly stressed.
“Yes, I would [partake in Totus Tuus again] because it’s so much fun packed into five days! Like, it’s exploding of fun!” he said.
He was also most anxious to encourage his peers to participate in Totus Tuus in the future.
“I would say, ‘Hey! Guys! There’s this program called Totus Tuus and you get to learn more about Jesus and how powerful he is,” Call said.