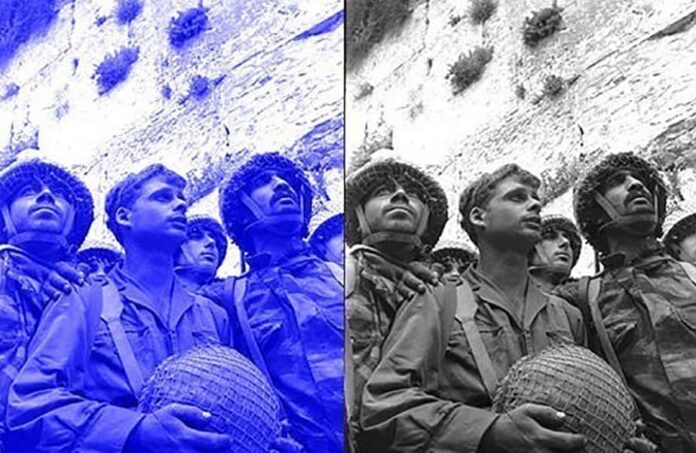 Photographs can capture exceptional moments in an iconic way, making the original experience “present” emotionally as well as pictorially.

The photo of U.S. Marines raising the American flag on Iwo Jima’s Mt. Suribachi “means a Marine Corps for the next 500 years,” Secretary of the Navy James Forrestal said in 1945. The image of John F. Kennedy, Jr.’s boyish salute as his father’s casket left Washington’s St. Matthew’s Cathedral in 1963 helped cement the “Camelot” myth into its seemingly impregnable place in American public life. The “Earthscape” pictures shot by Apollo 8 astronauts at Christmas 1968 continue to play a not-insignificant role in today’s environmental movement.

And then there is David Rubinger’s iconic photo of young Israeli paratroopers at the Western Wall of Herod’s Temple in Jerusalem on June 7, 1967. The faces of those young soldiers, their expressions conveying surprise, awe, and wonder, tell a tale of national regeneration that stirred my heart when I was a teenager – a story that continues to inspire today. Yet the reunification of Jerusalem fifty years ago almost never happened.

The Hashemite Kingdom of Jordan had controlled East Jerusalem since 1948. The Jordanian king, Hussein, was a serious man with little reason to esteem the volatile Egyptian strongman, Gamal Abdel Nasser, who was busily trying to undermine Hussein’s rule. And despite the depredations Jordanians had committed in the parts of post-1948 Jerusalem under their rule – including turning Jewish gravestones into latrine pavements – relations between Israel and Jordan were far more rational than between Israel and Egypt. Yet when the crunch came in late May 1967, Hussein, under enormous pressure, signed an alliance with Egypt and joined the Arab assault on Israel – a mistake that cost him the West Bank and the eastern sectors of Jerusalem.

As a result, Israeli paratroopers stood at the Western Wall. And a Jewish polity was in charge of the most sacred of Jewish sites for the first time since Titus destroyed the Temple in 70 A.D.

I’ve been to Jerusalem four times, most recently in November 2015, and on each occasion I’ve visited the Western Wall and prayed there: for the “peace of Jerusalem” of which Psalm 122 speaks; for Jewish friends throughout the world; for my own family and friends, especially those in particular need. My 2015 visit to the Holy City was especially encouraging, though, because it suggested that something resembling a real religion-and-society debate is finally emerging in Israel.

On previous visits, beginning in 1988, I lectured at Hebrew University and spoke on programs organized by scholarly and civic organizations, the discussion always being about religion-and-society. Except it was a non-discussion, or at least a non-starter, for until recently, the religion-and-society debate in Israel meant ultra-orthodox Jews vs. thoroughly secularized Jews, which didn’t leave a whole lot of room for serious conversation.

November 2015 was different. While leading a week-long seminar on deep secularization and its effects in Europe (and on the democratic project throughout the world), I met younger Israeli scholars, deeply immersed in their Judaism and keen students of political philosophy, who were trying to articulate a Jewish theological rationale for human rights, democracy, the rule of law, and so forth. They were, in the main, Modern Orthodox and I thoroughly enjoyed our exchanges, one of which can be kibitzed on YouTube [weigel.link/50years]. Their work represents the possibility of creating something missing from Israeli society and culture for too long: a religiously-informed public philosophy for shaping the typically-raucous Israeli debate over the country’s present and future. Developing that body of thought is not going to be easy. But it wasn’t going to happen at all when the only actors on the stage were the ultra-Orthodox and the hard-core secularists, so now there is a chance.

On this fiftieth anniversary of the reunification of Jerusalem, thanks are also due to the Israeli authorities for the care they have taken to make genuine pilgrimage possible throughout the Holy City, which is far more open to people of all faiths today than it was when the city was divided between 1948 and 1967. Israel’s admirable stewardship of Jerusalem is too infrequently acknowledged; it’s both a duty and a pleasure to acknowledge it here.

To return to the psalmist, “For the peace of Jerusalem, pray.…May peace reign in your walls/in your palaces, peace!”