There is nothing better than the Catholic Thanksgiving meal 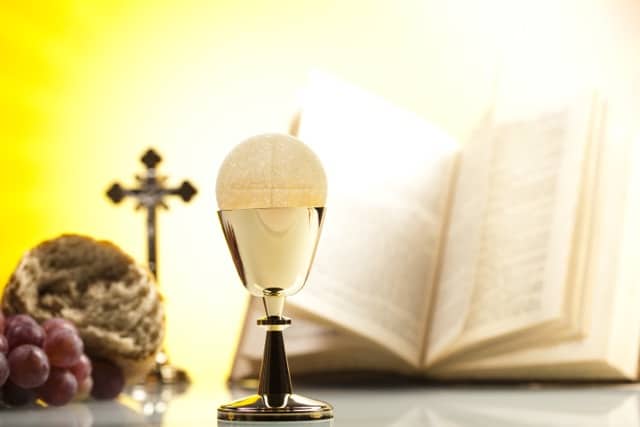 More than a succulent dinner on a Thursday in November, Thanksgiving is a family celebration meant to rejoice in the gift of life and the goods we possess. Yet, as much as a tasty turkey and a good football game can delight us, nothing can top the way Catholics celebrate thanksgiving — and by that we refer to the Mass. The thanksgiving aspect of the Mass is much more than many of us realize.

Eucharist comes from the Greek “eucharistia,” which means “thanksgiving.” But the difference between the Eucharistic meal and a Thanksgiving one is not a small one. The Eucharist represents the pinnacle of creation, the “living center of the universe,” that leads every human person to what he or she is or she called to be.

In dialogue with Dr. Michael Barber, Associate Professor of Theology and Sacred Scripture at the Augustine Institute in Denver, we provide an account of how the Eucharistic celebration was directly linked to thanksgiving from the ﬁrst centuries, considering its Jewish roots in the todah and Passover, and what that means for all who partake in it.

“Todah” is Hebrew for “thanksgiving.” The todah sacriﬁce in Judaism was a type of peace offering that was offered by someone who had received a great beneﬁt from God, especially when the person was delivered from a life-threatening danger, Dr. Barber explained.

“The peace offering was a particular sacriﬁce in which the lay person could eat the sacriﬁce, and they would have a sort of feast with their closest family and friends,” he said.

The joyful meal was accompanied with prayers and songs of thanksgiving (1 Cron 16). Psalm 100 is an example of this, as it is even titled “A Psalm for the thank offering” in the Bible, Dr. Barber said, and it speaks of thanksgiving for God’s mercy and faithfulness for his people.

These qualities made it unique among other types of sacriﬁces.

In sin offerings, for example, “the priest held a role in mediating forgiveness and was the only one who could eat from the sanctiﬁed sacriﬁce,” he continued, (Lev 6:29); and in burnt offerings, the sacriﬁced animal was wholly consumed in the ﬁre (Lev 6: 8-13).

Scholars have debated on why the Mass was referred to as a thanksgiving (Eucharistic) celebration and its relationship to the Jewish Passover and the todah.

Justin Martyr, in one of the earliest accounts of the Mass written around the year 155, constantly uses the word eucharistia: “…he taking [bread and wine]… offers thanks… And when the president has given thanks… those who are called by us deacons give to each of those present to partake of the bread and wine… over which the thanksgiving was pronounced” (emphasis added).

The simple answer is Jesus’ thanksgiving over the bread and wine at the Last Supper: “He took bread, and when he had given thanks he broke it” (Lk 22:19).

Nonetheless, Dr. Barber also assured that we can dive deeper by referring to the Old Testament and other Jewish writings.

“In Jeremiah’s “Book of Comfort” (chapters 30-33) we read about the redemption of God’s people, the New Covenant and the thought that when God redeems his people, they will offer the thanksgiving offering” (Jer 31:31; 33:10-11), he explained.

Furthermore, he pointed to the Rabbinic source called the Pesiqta, which states: “In the coming Messianic age, all sacriﬁces will cease, but the thank offering [todah] will never cease.”

“It is no surprise, then, that when Jesus comes and offers himself, he would offer thanksgiving for deliverance,” Dr. Barber said.

Some scholars have rejected the theory of the todah as the base for the Eucharistic celebration because the allusions to the Passover during the Last Supper in the Gospel are too strong.

“We ﬁnd that at times [Jews] talked about the todah in connection with the Passover,” Dr. Barber said, referring to the ﬁrst-century Jewish philosopher Philo, who described the Passover in Greek, saying: “And this festival is instituted in remembrance of, and as a thanks [eucharistia] for, their great migration which they made from Egypt.”

“The Passover is kind of a thanksgiving sacriﬁce,” Dr. Barber explained. “They are both a remembrance and a thank offering.”

“The Passover has both the form and content of the todah because it is a concrete example of a todah sacriﬁce… When Jesus takes bread, breaks it, and declares thanksgiving (eucharistia), he is performing the key function of both the todah and Passover — giving thanks for deliverance,” Dr. Tim Gray wrote in an essay titled “From Jewish Passover to Christian Eucharist: The todah Sacriﬁce as Backdrop for the Last Supper.” “Here, however, Jesus is not simply looking back at Israel’s history of salvation, but forward to His death and Resurrection. In other words, Jesus is giving thanks to the Father for His love and for the new life to be granted in the Resurrection.”

The act of thanksgiving

A factor of thanksgiving that is common among many cultures and beliefs is the act of giving thanks through a meal.

Dr. Barber sees in this the greatness of the Incarnation — that God becomes fully man and takes on even the most basic aspects of human life, such as food and drink.

“The great thing about the God of Christianity is that he’s incarnational, he’s embodied,” he said. “In scripture, creation sings forth the Glory of God — he uses material things to communicate spiritual truths. There is nothing more tangible than eating a ﬁne meal, so it’s appropriate God would use that.”

Dr. Gray sees that one of the greatest lessons from the todah and thanksgiving aspect of the Mass is true worship.

“One of the key fruits of a todah and of Eucharistic spirituality [is that] a deep sense of thankfulness leads to worship. If gratitude is cut off, the will to worship will wither,” he writes.

Moreover, he says that the main lesson of the todah is that “it teaches us to trust God with a grateful heart.”

Dr. Barber also highlighted that the thanksgiving aspect of the Eucharist leads us to trust in God in times of trial.

“It shows us that God allows us to go through difficult times so that our faith may be deepened, so that he can demonstrate his love for us,” he said.

This reality is present in the Paschal mystery: in the death and Resurrection of Jesus himself, he explained, and also in the deliberate organization of the Psalms, which also tell a story of deliverance.

“By participating in Jesus’ Eucharistic thanksgiving, we remember who God is, and so we learn to trust in the love that moves the sun and the stars,” Dr. Gray concludes. “That is what a Eucharistic spirituality is all about.”