The Next Pope and the Great Commission 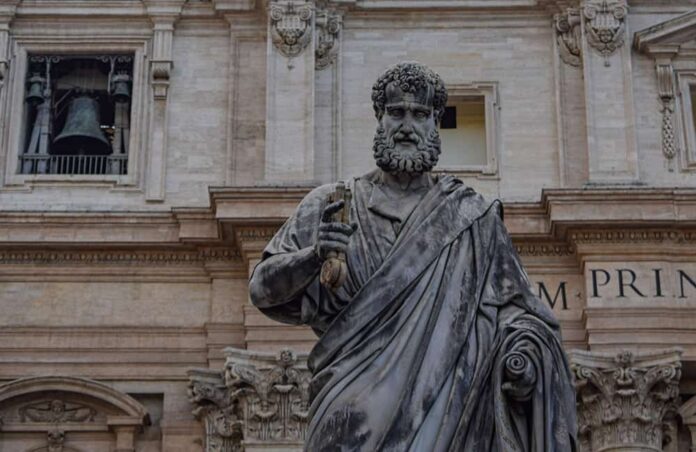 In The Shoes of the Fisherman, crusty old Cardinal Leone, canvassing votes for a surprise candidate just before the election of a new pope, is deeply moved by a quiet admonition from a Syrian cardinal named Rahamani: “Always you search a man for the one necessary gift – the gift of cooperation with God. Even among good men this gift is rare. Most of us, you see, spend our lives trying to bend ourselves to the will of God, and even then we have often to be bent by a violent grace. The others, the rare ones, commit themselves, as if by an instinctive act, to be tools in the hands of the Maker.”

For some reason, I thought of Cardinal Rahamani while I was writing The Next Pope: The Office of Peter and a Church in Mission, which has just been published by Ignatius Press. So perhaps the fictional cardinal’s words had some indirect influence on the ending of this small book’s reflection on Peter’s Chair and its role in the 21st-century Church –

“The next pope must be, above all, a radically converted disciple: a man formed in the depth of his being by the conviction that Jesus Christ is the incarnate Son of God, who reveals to the world the face of the merciful Father and the truth about humanity, its dignity, and its destiny. The intensity of the next pope’s relationship with the Lord Jesus, and the wisdom of his discernment of what the Lord Jesus is asking of him at any given moment, will determine whether his papacy advances the cause of the Gospel or frustrates the Church’s evangelical mission.

“That is why the next pope needs, and deserves, the prayerful support of the entire Catholic world.”

I have no idea when the next papal conclave will take place. Nor do I have a settled view of who the next pope should be, and still less on who he will be. My book is not about handicapping possible candidates for the papacy or profiling them. Rather, it’s an agenda for the Catholic future. Recent papal history suggests that certain qualities are needed in the Bishop of Rome at this turbulent period in history. Reflecting on those qualities helps everyone understand this Catholic moment and its demands more clearly.

Over the past 30-some years, I have had the privilege of extensive conversations with the popes of the last four decades. And during that time, I’ve also been privileged to be in close contact with Catholics in many circumstances throughout the world. Those privileges created a debt, and it struck me earlier this year that one way to satisfy that debt would be to reflect on what Petrine, papal leadership might look like in the middle decades of this century by drawing on my experiences with Pope John Paul II, Pope Benedict XVI, Pope Francis, and a myriad of fellow-Catholics.

The Next Pope begins with the premise that we are living in apostolic times – times that require every Catholic to be an evangelist – rather than Christendom times: times in which the ambient public culture transmits the faith. The three popes I have known personally have all recognized this, each in his own fashion. That recognition must set the context for the next pope’s response to the Lord’s instruction to Peter at the Last Supper:  that Peter’s unique role among the apostles would be to “strengthen your brethren” (Luke 22:32). Petrine leadership in the Church of the New Evangelization thus means empowering the people of the Church, in every state of life in the Church, to be the missionary disciples they were called to be at their baptism.

All of that is explored in greater detail in The Next Pope, which I hope will provoke a useful conversation about the Catholic future.