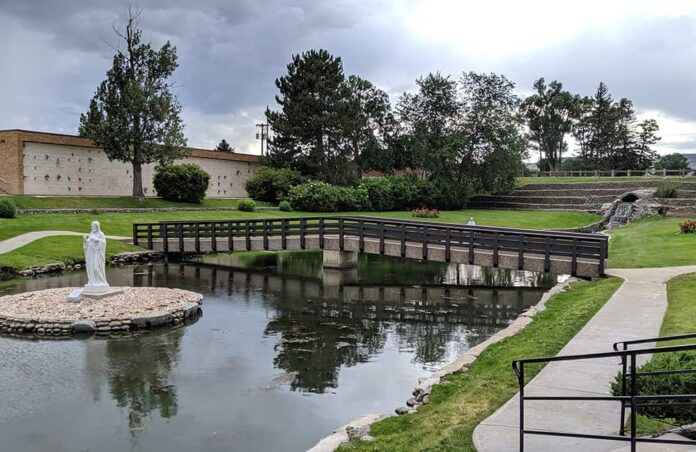 In addition to providing service and fulfilling the part of the Boy Scout Oath, “To help other people at all times,” one of the key aims of the Eagle Scout service project is to learn, improve or demonstrate leadership. One young man’s recent project achieved those goals and visitors to more than century-old Mount Olivet Cemetery in Wheat Ridge will benefit as a result.

On July 27, Quinn Filby, 16, of Troop 770 at St. Thomas More Parish in Centennial, led a group of fellow Scouts and adult volunteers in restoring the railing on a 70-foot-long bridge that crosses one of two ponds at the nearly 400-acre cemetery. Filby and friends had previously painted the new railings and guardrails.

“The bridge was in poor shape,” said John Miller, outreach coordinator for the Denver Archdiocese’s Catholic Funeral and Cemetery Services. “The paint was peeling and the rails were wobbly. It was deteriorating. Now it’s awesome. Quinn and the rest of the folks with him did a great job.”

Filby, a junior at Regis Jesuit High School-Boys Division who is considering studying engineering after high school, said his project gave him hands-on experience organizing and leading a group of about 20 people.

Assistant Scout Master Bill Bergmann participated in the bridge restoration. He said Filby worked with the cemetery staff to plan and complete the project, raised the money for the supplies, and led the restoration.

The Eagle Scout Award is Scouting’s highest rank and among its most familiar icons. Americans from all walks of life know that being an Eagle Scout is a great honor, even if they don’t know just what the badge means, asserts the Boy Scouts of America website. Among the requirements to achieve Eagle rank, a Scout must demonstrate “Scout Spirit” by living the Scout Oath and Scout Law (a list of 12 virtues) and tell how they have done their duty to God, how they have lived the Scout Oath and Scout Law, and how their understanding of those will guide their life in the future. The Eagle service project is the capstone task for the award.

“The Eagle project is one of many requirements to be completed on the journey to Eagle,” Bergmann said. “I expect Quinn will complete all necessary requirements and obtain the rank of Eagle in the near future. In addition to Quinn, our troop currently has three other Life Scouts actively working through various stages of their Eagle service projects.”

Filby’s efforts toward his Eagle rank goal helped the cemetery staff achieve a couple of theirs as well, Miller said.

“Cemeteries are sacred, beautiful places that honor and show appreciation to the dead but which also provide beauty for those who use it to visit their loved ones and who come to pray and reflect,” he said. “The restored bridge makes it very inviting. First: it’s safe. Second: it really makes the cemetery beautiful. It just really is sharp.”