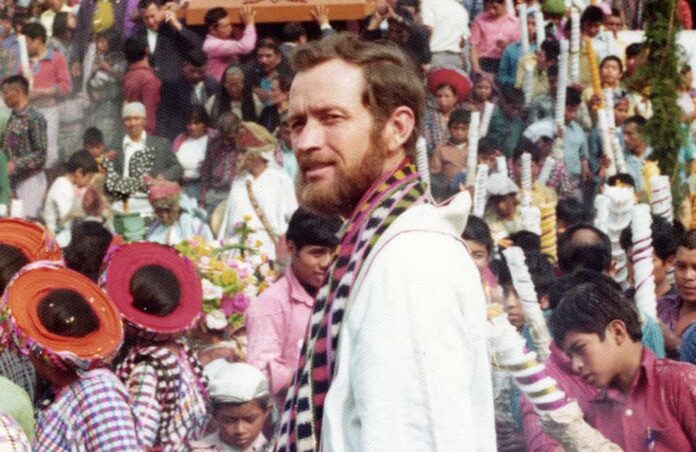 Father Stanley Francis Rother, an Oklahoma native, knew his life was in danger. Why? Because he was a missionary priest in Santiago de Atitlán, Guatemala, an area affected by the conflict between the government and guerrillas in the 1980s.

“The shepherd cannot run at the first sign of danger,” he told his friends when they encouraged him to leave his mission field.

This priest of the Archdiocese of Oklahoma City will be beatified Sept. 23; the Holy See has recognized him as a martyr. Father Rother was killed because of his faith on July 28, 1981, in Guatemala.

Denver Catholic spoke with the postulator of his cause of canonization, Andrea Ambrosi, who noted that the priest faced adversity with “courage, a smile, prudence, and readiness to serve.”

Stanley Francis Rother was born March 27, 1935, in Okarche, Oklahoma, to a very religious farming family of German descent. He received solid religious formation at the Holy Trinity school and parish, and at home. The seed of faith fell on fertile ground and he heard a call to the priesthood.

His time in the seminary was not free of obstacles, however, particularly in the academic realm. Stanley struggled to learn Latin and even left the school for a time, until the bishop, Victor Reed, suggested that he transfer to Mount St. Mary’s in Emmitsburg, Maryland. After great effort, he managed to complete his theology studies and was ordained a priest on May 25, 1963.

In the spring of 1968, Oklahoma was visited by Father Ramón Carlin, who came seeking priests who might feel called to serve in Santiago Atitlán, Guatemala, responding to a call that Pope John XXIII had made to US priests, inviting them to work as missionaries in Central America.

Father Stan felt this call, and was assigned to the mission at Micatokla, part of the Catholic Mission of Santiago de Atitlán in the region of Sololá, Guatemala. The Oklahoma priest left for his new mission that same year, in 1968. He was 33 years old.

He began to serve a population of some 30,000 inhabitants in the Tz’utujil community, made up of descendants of the Mayans, Ladinos and Spanish. The area was very poor, dependent on farming, fishing, commerce and handcrafted goods. At the beginning, the new pastor could communicate only with gestures, but little by little he learned Spanish and Tz’utujil.

His work was not solely focused on pastoral ministry and liturgy, however. With the great advantage of having grown up on a farm, he quickly began to assist in building structures so that the sololatecos (residents of Solola) could live with greater dignity. He would go about fixing a bathroom floor here or a light fixture there. He eventually worked to build a hospital, personally assisting in installing the electricity, and digging a 300-foot well. He worked out a system of irrigation with the rain, and also experimented with fertilizers to improve the soil of Santiago de Atitlán.

Between 1972 and 1975, he spent his time “helping the sick and dying, bringing all types of aid, and working with the catechists,” Ambrosi explained.

“He presided over daily Mass, celebrated many baptisms, marriages, and frequently heard confessions,” he continued.

Father Stanley also collected donations for the mission, as well as spending time on the farms and teaching the people about agriculture.

“If the people had anything that needed to be repaired, they went to him for help,” the postulator explained.

“He visited newlyweds, bringing them a photo from their wedding, blessing their home, and staying to have dinner with them. The pastoral work of the Servant of God and his collaborators had impressive results: He celebrated between 500 and 1000 baptisms a year, as well as hundreds of marriages and First Communions. He distributed Communion to close to 2,000 people a week,” Ambrosi said.

Father Rother also worked so that the lectionary of the Mass and the New Testament would be translated to Tz’utujil, a project that was completed and published after his death.

Guatemala’s civil war was spreading and reaching new regions. Many people began to disappear from the communities surrounding the Lake of Atitlán. Many of these were catechists, since the government was prohibiting religious practice. Father Rother walked along the roads to find the bodies of the slain, in order to give them a proper burial. He also brought food to the orphans and widows left by the war.

After receiving threats himself, he returned to Oklahoma at the beginning of 1981. But in spite of the many people who urged him to stay in his homeland, he decided to return to Tz’utujil and celebrate the liturgies of Holy Week with his faithful.

Easter passed and summer came. On the morning of July 28, three armed men came into his house, dragged him to his room and shot him. His parish vicar, Father Francisco Bocel, found his body after the assassins had fled.

With his testimony of a life given entirely to his neighbor, to the simple and needy of Soloa, Stanley Francis Rother, the first of 13 priests who died during Guatemala’s civil war, will be raised to the altars.

Days before being killed, he wrote in one of his letters: “The shepherd cannot run at the first sign of danger. Pray for us that we may be a sign of the love of Christ for our people, that our presence among them will fortify them to endure these sufferings in preparation for the coming of the Kingdom.”