His Church. Our Experience.
Subscribe
HomeLocalSaying goodbye to a hero
LocalObituariesStoriesWorld & Nation

Saying goodbye to a hero 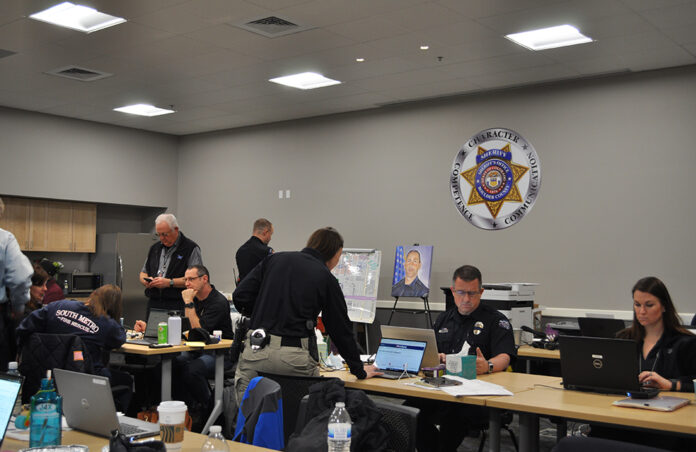 The funeral services for Boulder Police Officer Eric Talley, a devout Catholic who was killed in the line of duty March 22, were beautiful, moving and meaningful. They honored Talley’s faith, his sacrifice and the hero he was and let his family, fellow officers and the wider community grieve and show gratitude for his life and selfless service.

Led by the Talley family’s wishes, a team of law enforcement and civilian volunteers from the nonprofit Colorado Fallen Hero Foundation made the services happen, at no cost to his family or police department.

“The Colorado Fallen Hero Foundation is a coordinated effort to bring comfort and assistance to the family of a fallen officer and his home agency,” said Deacon Ernie Martinez, a lieutenant with the Denver Police Department who served as liaison for them and the Archdiocese of Denver. “We alleviate the stress on the family and on the home agency to allow them to concentrate on the grieving process and the police investigation.”

A solemn high requiem funeral Mass was celebrated in Latin by Father Daniel Nolan, FSSP, on March 29 in Denver. Father Nolan, assistant pastor at Our Lady of Mount Carmel Church in Littleton where the Talley family worships, also led a memorial service with police traditions for a fallen officer on March 30 in Lafayette. Preceded by lengthy motorcades of law enforcement vehicles, both services drew hundreds of people. Hundreds more viewed the services online via livestream.

A memorial for a hero

The services aimed to honor Talley’s life as a faithful Catholic and as a loyal public servant, said Denver Police Officer Danny Veith, a charter board member of the foundation. Veith, a Catholic, served as the foundation’s liaison to the family. The foundation organized and executed the services respecting the family and the home agency’s input, he said.

“The goal of the foundation and my goal is to gain the family’s trust and express to the department and the foundation what they want done to memorialize their loved one,” Veith said. “I make sure their wishes are followed. I also provide them with information on what the typical fallen officer’s memorial looks like. We make sure it is personalized to reflect the officer’s personality and what they were like as a spouse, parent and co-worker.”

The traditional Latin Mass with soaring chant and hymns was what was wanted by Officer Talley, Father Nolan said, and was a priority for Talley’s wife Leah and their seven children to practice their faith as they buried their husband and father. The Talley family’s pastor, Father James Jackson, FSSP, delivered a stirring homily and Archbishop Samuel J. Aquila spoke about Talley’s sacrifice and expressed gratitude to all law enforcement.

The following day’s memorial service gave Talley’s fellow officers the opportunity to observe police customs for a fallen brother. In addition to prayers, it included musical processions by Colorado Emerald Society Pipe and Drum Band, eulogies by civic officials and police, a 21-gun salute, the playing of Taps, an “end of watch” radio call, and the folding and presentation of the flag that covered Talley’s coffin to his widow.

“It gave his children the chance to witness a memorial where their father is recognized as the hero he was,” Veith said.

‘A sacred honor and privilege’

Formed in 2017, the Colorado Fallen Hero Foundation partners with Horan & McConaty mortuary, which donates their services and provides a casket or urn at no charge. Likewise, partner Dr. Sara Metz and her Code-4 Counseling provides free therapy for the fallen officers’ agency and family.

“I was there for our anniversary,” he explained. “We had a great time with our kids. But when something like this is going on, it’s important for me to be here and to make sure all the details are absolutely perfect. We don’t a get a second chance to do this well.”

Since 1988, Horan, a Catholic, has provided free services to 28 public safety officers.

“When someone who is charged with keeping the public safe is killed in the line of duty, the least we can do is ensure they don’t have expenses as a result of that,” he said, adding that they also offer guidance about ceremonial procedures. “We make sure the services are done with sensitivity, acknowledging the needs of the family and, to a lesser degree, the community.”

The foundation volunteers and Horan oversee the thousands of details involved in the services and motorcades.

“My work is a sacred honor and privilege,” Horan said.

Foundation treasurer Heidi Prentup, retired division chief of the Boulder County Sheriff’s Office and a Catholic, said the Colorado Fallen Hero Foundation was the idea of former Aurora Police Chief Nick Metz, who had belonged to a similar organization in Seattle. Metz serves as executive liaison for the foundation.

On March 26, a large conference room at the Boulder Country Sheriff’s Office was buzzing with activity as 65 male and female law enforcement officers from a dozen agencies huddled in different groups ranging from logistics to public information, working out final details for the then upcoming motorcades, Mass and memorial service.

“Today is the final day to ensure everything is scripted,” Deacon Martinez said.

“It’s based on the military command model, where everybody has a role,” added Veith. “We turn into an efficient machine, if you will, to carry out all these tasks so when the family experiences the funeral services there are no mistakes. It is a flawless, beautiful tribute.”

‘We are deeply grateful’

From guarding Talley’s body 24/7 from when he was shot March 22 to the moment he was buried, to the somber rituals carried out at all the events with military precision and respect, the work of the foundation volunteers was an act of love.

“These people have such a heart,” Deacon Martinez said. “You have police and sheriffs’ officers from all over the metro area, the whole state really. It’s a lot of work. Everybody brings their talents for a common good.”

As a nonprofit, the Colorado Fallen Hero Foundation depends on donations.

“It takes a lot of money to pull off these events,” Veith said. “We also do follow-up with the family. Officer Talley’s name will be added to the National Law Enforcement Officers Memorial in Washington, D.C., in May 2022. We will make sure the family will be able to get there.”

At Talley’s memorial service, Boulder Police Chief Maris Herold offered praise and gratitude to those who made it possible.

“That was the most beautiful ceremony I’ve seen and witnessed,” she said. “Thank you for that. I would be remiss if I didn’t thank the Colorado Fallen Hero Foundation, Chief Nick Metz and his team for his logistical support.”

“I can’t say enough about the Colorado Fallen Hero Foundation,” she told the Denver Catholic. “How much they have helped us—especially the children. We are deeply grateful. I have no words, really, to explain the depth of our gratitude.”

For information or to donate, visit: CoFallenHero.org