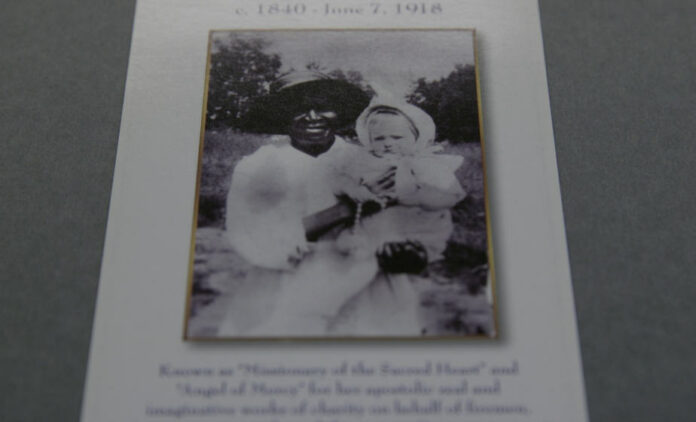 She was known as Denver’s “Angel of Charity.”

Former slave Julia Greeley had endured brutality; she lost an eye as a child to a whip while she clung to her mother who was being beaten by a slavemaster, and she suffered racism, which sentenced her to menial jobs and poverty. A Catholic convert and daily Communicant, Greeley transcended injustice through her faith and became known for astonishing works of charity despite her meager means. When she died at age 70-85—she didn’t know how old she was—Greeley was so beloved that her body lay in state for five hours as a constant stream of people from all walks of life paid their respect to this saintly woman.

Greeley has been selected as the local face of mercy for Catholics to model during this special jubilee Year of Mercy, which started last month and runs through Nov. 20. The Denver Archdiocese has commissioned a sacred image to be made of her that will be unveiled at the end of the month.

“She stood out because of how extraordinary she was,” said David Uebbing, chancellor for the archdiocese. “Even though she was only earning $10 to $12 a month cleaning and cooking, she was using it to help other people who were poor. That spoke volumes about the charitable heart she had. In addition, she had great devotion to the Sacred Heart of Jesus and was known for walking (monthly) to 20 different firehouses to give (felt) badges of the Sacred Heart and tracts to firemen. That brings to life the corporal and spiritual works of mercy this holy year is dedicated to.”

Born as a slave between 1833 and 1848 in Hannibal, Mo., Greeley arrived to Colorado in 1874, 11 years after slaves were freed. In 1878, she came to Denver with Julia Gilpin, a Catholic and wife of Colorado’s first territorial governor, William Gilpin. Greeley converted to Catholicism in 1880 at Sacred Heart Church in Denver. A daily Mass attendee, she called the Eucharist her “breakfast.”

After leaving the Gilpins’ service, Greeley did odd jobs cooking, cleaning and caring for children and was a familiar sight on Denver streets in her humble clothing, floppy hat and oversized shoes, pulling a red wagon that was filled with items she bought, found or begged for and which she gave to the needy. She frequently delivered the goods—often to poor white families—under cover of night, to remain anonymous. She died on June 7, 1918, the Feast of the Sacred Heart. Both Denver dailies and the Denver Catholic Register wrote long obituaries about her.

Over the years, many have expressed a desire to see Greeley canonized. Locally, a book about her life is in its second printing, and a guild and a women’s homeless shelter bear her name. Despite that, many have never heard of “Old Julia.”

“There is only one known photo of her,” Uebbing said, referring to a photograph that depicts Greeley holding a baby girl she sometimes cared for. “That’s the reason for commissioning the sacred image. It will raise awareness of her. It will include images of the things she did. We want to bring her to life today.”

Unfortunately, the lone photo of Greeley doesn’t clearly depict her face as her hat shadows her eyes. Iconographer Vivian Imbruglia of Rancho Cucamonga Calif., aims to change that.

“This is not a portrait,” Imbruglia said. “This will be different in that you will see her face. In the photo, you only [clearly] see her nose and mouth.”

The image is being written on wood covered by linen and will depict symbols pertinent to Greeley’s life: the Sacred Heart of Jesus, the Eucharist, her red wagon, the Rocky Mountains, a child and a firehouse.

“My prayer,” Imbruglia said, “is that this image will tell a story for someone who doesn’t know her, as opposed to a portrait.”

Imbruglia had the sole photo of Greeley enlarged to look at as she works and, immersing herself in prayer, believes Greeley is helping her with the project.

“Her face has been slowly revealed to me,” the iconographer said. “I feel like she’s being unveiled before me.”

With just one good eye, Greeley often dabbed at the bad one, which oozed, with a handkerchief. The good woman wasn’t considered very attractive, however, she was known for exuding joy with an unforgettable smile.

“She’s coming out beautiful,” Imbruglia said, likening Greeley’s beauty to that of St. Mother Teresa. “I hope it honors her.”

“I was really happy when I heard the archdiocese was going to include (Greeley) in its Year of Mercy celebration,” said Mary Leisring, president of the Julia Greeley Guild. “We had a saint walking the streets of Denver yet very few people know about her.”

Leisring and Capuchin Franciscan Father Blaine Burkey, author of In Secret Service of the Sacred Heart: The Life and Virtues of Julia Greeley, will be featured in a short documentary the archdiocese is making about Greeley that will be shown at the Jan. 23 “Mercy Chose Me” conference on living the Year of Mercy. Imbruglia’s sacred image of Greeley will be unveiled at the conference, to be held at Immaculate Heart of Mary Parish in Northglenn, and a panel will discuss her life.

“She was treated so miserably in many ways and yet she spent her whole life helping people,” Father Blaine said. “She practiced the works of mercy in a heroic degree.”