His Church. Our Experience.
Subscribe
HomeLocalQ&A: Cardinal Stafford: “The Eucharist has been the center of my life”
LocalQ&A

Q&A: Cardinal Stafford: “The Eucharist has been the center of my life” 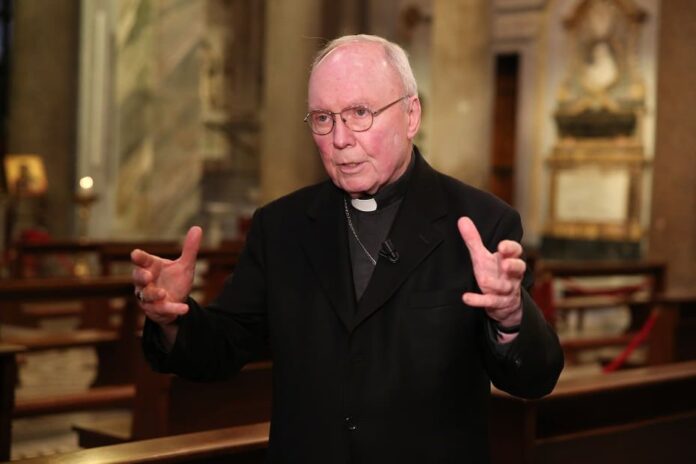 On the dawn of his 60th anniversary of priestly ordination, Cardinal J. Francis Stafford, archbishop emeritus of Denver, reflects on the origins and fruits of his vocation. He will celebrate a Mass in thanksgiving with Archbishop Samuel J. Aquila at the Cathedral Basilica of the Immaculate Conception on Dec. 17, at 10:30 a.m.

DC: What were your desires as a young man and how did God call you to the priesthood?

Cardinal Stafford: Images of God arose very early in my life. From my parents’ encounter with Jesus in the confessional, concrete impressions developed into images. Those images spoke to me of God’s holiness and beauty. I understood that He was great and forgiving.

Reality became complex with more birthdays. The brutality of the 20th century… insinuated itself into my world-view. I was bewildered by the horror of that era… A few years later I also discovered St. Augustine’s joy in reflecting upon the beauty of the Creator of the world in his Confessions… I learned that the love of Christ transforms our unloveliness into God’s beauty.

Both the beauty of the Ancient One and the rub of evil have coexisted in my faith and experience. Jesus’s invitation, “The laborers are few”, resonated in my soul.  The fact that the priestly vocation is totally given over to the “ministry of reconciliation” became the North Star of my life.

DC: What practices have helped you remain faithful to your vocation during these 60 years?

Cardinal Stafford: When awakening each morning, I recite a single verse from Psalm 51, “Lord, open my lips and my mouth will proclaim your praise.” Three times it is repeated. Thereafter, the grace of God sets the day on the right track. It becomes a song of praise to God. With hard practice it daily gathers momentum. It places front and center the most beautiful mystery of the Christian faith: The Triune God. The love and beauty of the Most Holy Trinity light up the whole day even when God appears more distant than near.

The psalmist has been a great catechist. He has taught me that human beings are doxological (people of praise) by nature especially in the Dark Night – not only as individuals, but also within community… Doxological prayer has led me to appreciate why St. Augustine wrote, “The goal of all Christian watchfulness and all Christian progress is a pious and sober understanding of the Trinity.”

DC: What have been some of the challenges and highlights of your priesthood?

Cardinal Stafford: The challenges: Christians in Europe and North America are struggling with the “juggernaut” of secularization… Generally, its roots are found in the fact that most Europeans and Americans today find themselves thrust into the universe without any foundation for living. Most imagine themselves in a free-fall through space with unintelligible entrances and exits. The challenge is how to confront this unprecedented reality. The pastoral solutions have seldom been forthcoming.

The highlights of my priesthood: Visiting the home-bound. They are the hidden pillars of every local Church. Beyond the home-bound, I have always felt that Colorado’s response to the invitation to celebrate the 1993 World Youth Day was the measure beyond all measure. In other words, the event was from God… [and] God was delighted with Coloradans.

DC: Who have been your greatest role models and how have they impacted your vocation?

Cardinal Stafford: My mother and father have been my greatest Christian role models. Their love and friendship were life-long and mutual. The two were the best of friends. Their life together, ten years after their marriage, was tested severely… [Tuberculosis] struck [my mother] with extreme severity.

She required prolonged hospitalization that included three major surgical operations over a period of nearly three years. Throughout that time her faith, courage and love remained ever-present signs along the road. My father’s love for his wife never faltered during her hospitalization… His presence to her was reassuring, quiet, and unassuming.  The grace of the sacrament of marriage sustained both of them and was an enormously important witness for me.

DC: Reflecting on your priestly experience, what practices are essential to the Catholic priest of the New Evangelization?

Cardinal Stafford: The Eucharist has been the center of my life… Over the years, I learned that priestly celibacy was related to the eschatological nature of the Eucharist.  In 390 AD bishops at the Council of Carthage underlined this connection, “That holy bishops and priests of God…. observe perfect continence, so that they may obtain in all simplicity what they are asking from God; what the apostles taught and what antiquity itself observed, let us endeavor to keep.”

I’ve reflected for over four decades over the forthrightness of their statement. I still ask myself why the ancient bishops chose the phrase “in all simplicity.”  Their choice was related to the priest’s acting “in the person of Christ”. That’s Eucharistic and the Eucharist is doxological. Their assertion that clerical celibacy had apostolic origins surprised me.

Finally, a lay friend taught me one of the greatest graces of these sixty years, “Gratitude for the gift is shown only by allowing it to make one fruitful,” from Meister Eckhart. That is my prayer in celebrating my 60th anniversary of priestly ordination.