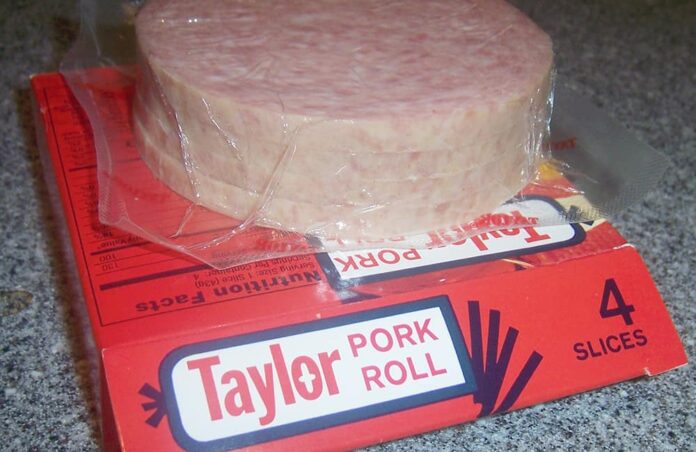 A few weeks before Ash Wednesday, an Associated Press squib with Lenten implications appeared in the Washington Post sports section:

* YANKEES: New York’s Class AA affiliate in Trenton, N.J., will change its name from the Thunder to the Pork Roll on Fridays this season. The pork roll is a New Jersey staple, served on breakfast sandwiches and as a burger topping.

For those unfortunates who didn’t grow up in the I-95 corridor between the Holland Tunnel and the southern outskirts of Baltimore, I venture to explain.

“Taylor Pork Roll,” also known as “Taylor Ham” south and west of the Delaware River, is a compound of the ground-up and sugar-cured bits of a pig of which the pig has no cause to be proud, tightly encased in a canvas wrapper. Fried or grilled, it’s salty and greasy and a lot of other wonderful things frowned on by the food police. In my wild adolescence, I used to cut a half-inch slab off the loaf, impale it on a fork, and roast it over an electronic burner in my parents’ kitchen: the ideal post-school snack before wrestling with Cicero’s Latin syntax and the mysteries of Algebra II. I still indulge in it occasionally, to my wife’s olfactory displeasure, and I always order it in a diner when breakfasting in the Garden State.

But only the perfidious Yankees – “the Yanqui enemy of mankind,” as the Sandinista national anthem in 1980s Nicaragua neatly put it – would have a farm team that changed its name to “Trenton Pork Roll” on Fridays.

Ad primum, pork roll was always consumed as a post-Mass treat on Sundays, and rigorously avoided on Fridays. Ad secundum, flaunting pork roll in the face of devout Catholics by emblazoning it on jerseys at Arm & Hammer Park on Fridays is an invitation to the divine wrath, to which the Thunder/Pork Roll is already vulnerable because of its major league affiliation.

So in solidarity with fellow-Catholics in the Diocese of Trenton, I propose that we all continue the Lenten practice of Friday abstinence from meat, which commences on February 16 this year, until such time as the Thunder/Pork Roll’s management acknowledges its miscue and switches the name-switch to Sundays. (If the Thunder wish to become the Trenton Fish Fry on Fridays, fine by me, although as a marketing tool that would likely work better in Wisconsin.)

Friday abstinence was once a defining mark of the practicing Catholic, and Lenten pork roll raillery aside, it ought to be again. The Catholic Bishops’ Conference of England and Wales is not renowned for its traditionalism, but some years ago the bishops mandated a year-round return to Friday abstinence south of Hadrian’s Wall, and good for them for doing so. If our baptisms really set us apart for Christ, then we should live a different temporal rhythm than the rest of the world: not to advertise our righteousness but to remind ourselves, each other, and those who might be curious about these Catholics and their ways that we’re, well, different. And at a moment in Western cultural history in which the tsunami of the Culture of Me threatens to overwhelm everything, putting down behavioral markers of difference is no small thing. From Friday abstinence, who knows what might grow?

Lent is the perfect time, or as Isaiah 49.8 puts it, the “acceptable time,” to begin a journey of Christian difference. As I explain in my book on a venerable Lenten tradition, Roman Pilgrimage: The Station Churches, the Forty Days should be an annual re-catechumenate for the entire Church: six and a half weeks in which the already-baptized join the catechumens who will enter the Church at Easter in walking the road to Calvary with the Lord, in order to be empowered for missionary discipleship in the Easter waters of baptism with which we are all blessed. Little things count along that pilgrim way, including small self-denials like eating differently on Fridays (and almsgiving, and intensified prayer, the other two great Lenten disciplines). Try it.

And, of course, Lent, which coincides with that other season of new disciplines known as “spring training,” is the acceptable time for the Trenton Thunder to get with the program, do a mea maxima culpa, and agree to become the Trenton Pork Roll on Sundays.

Evangelization: What and When?