His Church. Our Experience.
Subscribe
HomeLocalLifting the veil
Local 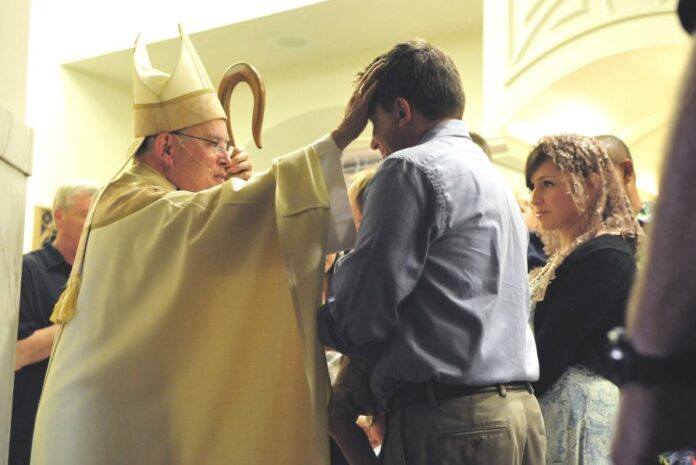 When Laurie Vargas packs her purse before heading to Mass at Holy Ghost Church, she adds a new item to her bag: a chapel veil.

What she once thought was a devotional item reserved for “little old ladies” praying in a church pew, a lace veil has become an exciting way for the 41-year-old to enter into undistracted prayer.

“I think for me it’s multifaceted,” Vargas said. “The idea that all things sacred are veiled and that includes me, as a daughter of God, is really beautiful. If this is a tool that helps me be more focused and enter the Mass more deeply, then I am really excited to explore that journey.”

A number of women have been spotted wearing veils or hats in church, suggesting that the practice may be on the rise in the Denver area.

Also called a head covering or mantilla, the typically lace or silk veils are worn over the head, sometimes falling onto the shoulders. While hats may be more common during Easter Mass, women may choose to wear them to achieve the same purpose—to renew a sense of the sacred.

Over the 2,000-year history of the veil among Catholic women, the particular reasons may have varied. In St. Paul’s time, head coverings were about modesty. A woman’s hair “is her glory” the apostle wrote in 1 Corinthians 11 and should be covered while praying. A veil was a sign of her relationship to men and should be done “because of the angels.”

The veil has long been a tradition among religious women who wear it as a sign of their vows and vocation.

Dominican Sister Francisca Igweilo, a canon lawyer who works for the Metropolitan Tribunal, has worn a black veil with her habit for 25 years. She said it is a sign of her penance as a nun and removal from the secular world.

She added that all Christians are consecrated to God as well through their baptism, and may wear a veil as a sign of that sacrament. Non-Catholics have also veiled themselves as a sign of reverence. First ladies Nancy Reagan, Hillary Clinton, Laura Bush and Michelle Obama wore black veils while in the presence of past pontiffs.

Crystalina Evert, national speaker and co-founder of the Chastity Project, found herself questioning why she didn’t wear a veil in the presence of God when even these secular leaders wore one out of respect for another human.

Evert, 34, who lives in Denver with her family, shared the journey she made in adopting the devotion.

“At first, I didn’t understand what the veil was,” she said after her spiritual director suggested it to her seven years ago. “I really had to pray about it and make sure I was not doing it because someone asked me to. I really wanted it to come from my heart.”

She reflected that the veil is worn by women for their first Communion and on their wedding day as they approach their earthly or heavenly groom. She said she felt her attire for Sunday Mass should also reflect the reality of approaching Christ in a different way than how she dressed for Saturday dinner.

“I veil because I feel when I go into the church, I’m on holy ground and it’s separate from the everyday,” Evert said.

While in the 1960s secular feminists exhorted women to “remove your badges of slavery to men and get rid of your veil,” Evert said she found wisdom from Catholic philosopher Alice Von Hildebrand who said it’s not a sign of inferiority but rather sacredness.

“Veiling indicates sacredness and it is a special privilege of the woman that she enters the church veiled,” Von Hildebrand is quoted as saying.

For Evert, the veil has become an invitation from God, she said, and reflects her relationship with him.

Vargas was one of many women who read Evert’s May blog post about veiling and decided to try it herself. Vargas’ fiancé, Daniel Barela, purchased two lace veils for her birthday. She wore her first one to Mass at Mother of God Church when she said she felt like she had entered a different space.

“I felt like I was really focused. It was like this private meeting that I was having with Jesus,” she said. “It was really beautiful.”