His Church. Our Experience.
Subscribe
HomeLocalLecture: Don’t listen to Pope Francis ‘with a filter’ or you’ll miss...
Local

Lecture: Don’t listen to Pope Francis ‘with a filter’ or you’ll miss the message 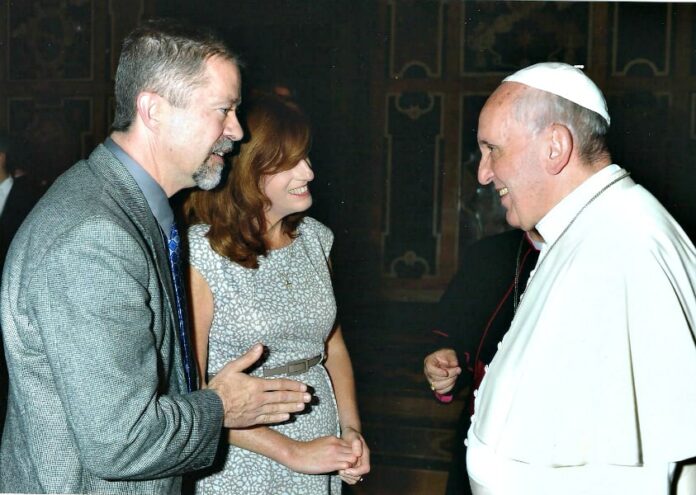 The Vatican has a special department dedicated to issues related to the family, and one of its representatives will be in Denver this month to speak on where family falls on Pope Francis’ agenda.

John Grabowski, Ph.D., along with his wife Claire, is a member of The Pontifical Council for the Family, a group that assists the pope as universal pastor of the Church by focusing on issues related to defense of human life, contraception, sex education, marriage preparation, and the rights, theology and spirituality of the family.

The Grabowskis are one of only two couples from the United States, and 30 worldwide, on the 200-member council. Grabowski, who is an associate professor and director of moral theology and ethics at The Catholic University of America in Washington, D.C., will speak at the Archbishop’s Lecture Series April 21.

In his talk “Pope Francis’ call to mission and the role of the family,” he aims to challenge and “hopefully debunk” two common misconceptions of the pope’s teaching in regard to family put forward by pundits and the some media outlets, both secular and Catholic.

The first, he said, is that Pope Francis’ teaching is somehow discontinuous with that of his predecessors; and secondly that he’s “really not very interested in family.”

“Family is forefront on his pastoral agenda,” Grabowski, a 51-year-old father of five, told the Denver Catholic from his office in Washington, D.C. “The purpose of the synods (on family) and the upcoming World Meeting of Families (in Philadelphia in September) is to engage families—not just as objects, but as subjects, of the new evangelization.”

What’s different about this concept, he said, is that Pope Francis is combining strands of the teachings of Vatican II, St. John Paul II and Pope Emeritus Benedict XVI.

“We need to see families as active participants in the new evangelization,” he said, not simply as spectators.

That message is lost on some people because they listen to the pope “with a filter,” Grabowski said, only hearing parts of what he’s saying.

Pope Francis’ dedication to families has been “remarkably evident” in his public acts over the first two years of this papacy, he continued, including calling two synods on family (October 2014 and October 2015), committing to attend the World Meeting of Families in Philadelphia Sept. 22-25, devoting his weekly general audience message to the topic, and speaking at events such as the Humanum conference on the “Complementarity of Man and Woman” last November.

“He’s calling on the family to be intentional missionary disciples,” Grabowski said.

Grabowski has participated in three plenary sessions of the pontifical council in Rome since his appointment by Benedict XVI in 2009, including the most recent in October 2013 where members enjoyed an unexpected private audience with Pope Francis who delivered a message on family, drawn from the catechesis he has prepared for the World Meeting of Families.

Grabowski, a widely published author in the areas of moral theology, marriage, sexuality and bioethics, holds a bachelor’s degree in theology from the University of Steubenville in Ohio and a doctorate from Marquette University in Wisconsin. He has served at the Catholic University of America for 22 years. From 2005-2009 he was a theological advisor to the U.S. Conference of Catholic Bishops Subcommittee on Marriage and Family.

His talk will be the fourth, and final, in the 2014-2015 series related to family at the same time the universal Church is focusing on the family. The lecture will be 7 p.m. in Bonfils Halls on the campus of the St. John Paul II Center for the New Evangelization at 1300 S. Steele St. in Denver.