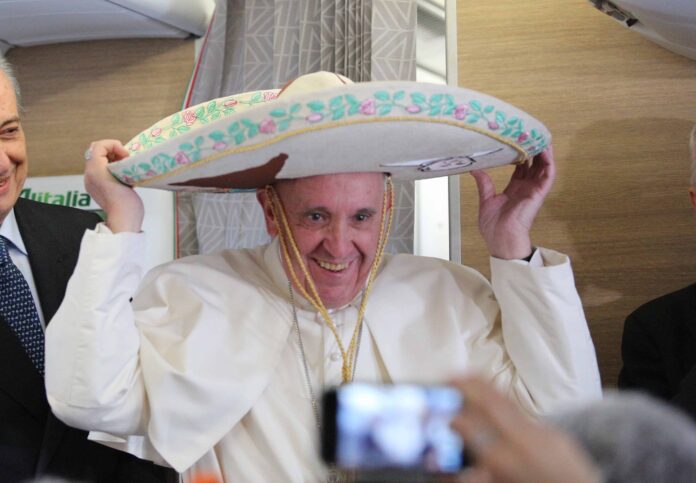 This past week Pope Francis visited Mexico. As I read his messages, it became clear to me that his insights also apply to the United States, in particular, his reflections on hope amidst great difficulty.

How often have we heard in our political discourse these last several months, ‘Our country isn’t what it should be.’ or ‘We don’t win anymore.’? We’ve also experienced the tragedies of Kalamazoo, San Bernadino, Newtown, and the list goes on. In other words, the struggles that we face in the U.S. are more similar than they are different. That’s why the Pope’s focus on hope and its true source is something to which all of us should pay attention.

The first thing that he did upon arriving in Mexico was to visit the Shrine of Our Lady of Guadalupe, which he said was the central point of his visit. Reflecting back on his visit, the Holy Father said on Feb. 21, “To remain in silence before the image of the Mother was what I intended first of all.”

After 20 minutes of quiet prayer, he celebrated Mass before the miraculous image of Our Lady of Guadalupe. He preached about how the same Mary who walked the paths of Judea and Galilee to help her pregnant cousin Elizabeth, also made herself present to the suffering people of the Americas through her appearance to St. Juan Diego.

When Mary appeared to him, she brought hope to a person who regarded himself as “worthless.” “On that morning,” the Pope said, “Juancito experienced in his own life what hope is, what the mercy of God is. He was chosen to oversee, care for, protect and promote the building of this Shrine.”

We usually think of a shrine as a building, but the Holy Father expanded that idea, saying, “God’s Shrine is the life of his children, of everyone in any condition,” including, for example, the youth, the elderly, and families in need of healing. Our Lady of Guadalupe says to each of us as she did St. Juan Diego, “Am I not your mother?”

When I think of young people who have become disillusioned with the empty promises of materialism and feel alone, of the elderly who feel abandoned or like they are a burden, or of families that are in need of forgiveness, I hear Our Lady saying, “Am I not your mother? Am I not here?” This is the source of our hope. We know that Mary is our mother and is ready to lead us to Jesus her son.

At his meeting with young people, the Pope heard about how many young Mexicans feel like they don’t have a future, like they are condemned to a life filled with violence and crime, one where dreaming is not possible.

Their essential message to him was: “all of us can live, but we cannot live without hope.”

We, too, are hit with the ravages of violence. Most places in the U.S. don’t experience drug cartel violence like Mexico does, but we are plagued by other forms of violence like mass shootings, acts of terrorism, crime and a society that supports the drug industry.

Pope Francis responded to the youth’s request for a word of hope by saying, “the one word I have to give you, which is the foundation of everything, is Jesus Christ.”

“When everything seems too much, when it seems that the world is crashing down on you, embrace his Cross, draw close to him and please, never let go of his hand, even if they are dragging you; and, if you should fall, allow him to lift you up.”

So many of the problems our country is faced with today could be solved if Jesus Christ was truly the Lord of each of our lives. Faith in Christ gives us hope and from that hope comes charity toward one another. Only Christ, who made us for himself, can bring about true conversion and peace in society. He is the cure for the isolation, indifference and coldness that are so common today.

As he was preparing to leave Mexico and fly back to Rome, Pope Francis made a comment that I have not heard him make anywhere else. He said, “I assure you, that on some occasions, as I passed by, I felt I wanted to cry on seeing so much hope among people who suffer so much.” Hope was visible on the suffering faces of the Mexican faithful who gathered to bid him farewell.

From the gift of faith comes hope and from those two virtues grows charity – the love of God and neighbor. At the center of the faith of Mexico stands the miraculous appearance of Our Lady of Guadalupe, who sowed the virtues of faith, hope and love in its soil. Let us pray that through her intercession God will increase our faith, so that we can have hope in him, even though we might suffer, and allow God who is love to fill our hearts so that our land may be transformed!

Our Lady of Guadalupe, patroness of the Americas, pray for us!

Archbishop Samuel J. Aquila
The Most Rev. Samuel J. Aquila is the eighth bishop of Denver and its fifth archbishop. His episcopal motto is, "Do whatever he tells you" (Jn 2:5).
RELATED ARTICLES
Catholic Education