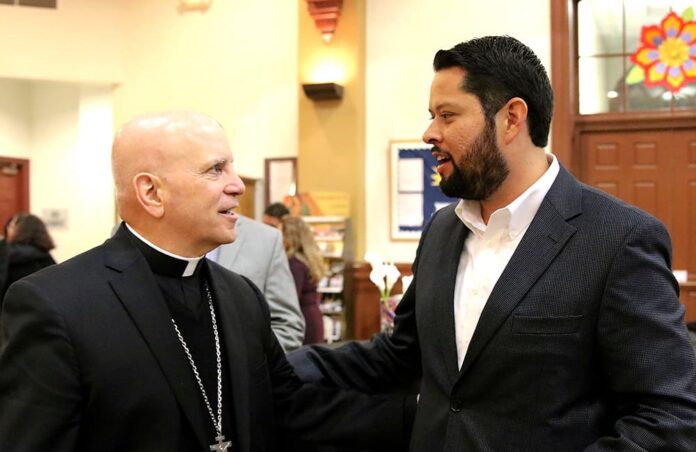 “Do not be afraid!” the angel told Mary Magdalene, “I know that you are seeking Jesus the crucified. He is not here, for he has been raised just as he said” (Mt. 28:5-6). In just over a week, we will celebrate the most important truth of our faith – that by his death and resurrection, Jesus loved us and freed us from sin and death for eternal life with the Father.

With the pace and daily concerns of life, it’s easy to get distracted from the reality of the resurrection, from what ultimately matters in life. Even though all of us know that one day we will die, we often keep our eyes focused on the present rather than the goal of heaven, eternity with the Father who loves us. It’s possible to treat Jesus’ resurrection and his promises to us as events and nice words from the distant past, rather than living words spoken by the author of life, the Son of God, Truth himself for our times.

On March 20th, the Church, his family, and the world lost the strong and virtuous example of a 33-year-old man of profound faith, Juan Carlos Reyes, the director of Centro San Juan Diego and a husband and father. For those without faith, the story would have ended when he passed away, but for Juan Carlos and for all who believe in the resurrection from the dead, it was only the beginning.

Throughout his very brief struggle with an extremely rare form of rapidly growing cancer, I was deeply moved by Juan Carlos’ faith. Because he knew and believed in Christ, he told people, “I’m not afraid to die. I’m ready.” He shared with me in a conversation, “I know God can heal me, but if my death will give greater glory to the Father and is his will for me, then so be it.” As the cancer progressed, he saw the suffering he was enduring as a gift he could offer to God out of love for Christ and for his wife and three young sons.

This was not something unusual for Juan Carlos. He was a father who sacrificed for his children and wanted to lead a holy life and set an example for them and all he met. As his brother Jorge mentioned at his funeral, Juan Carlos and his wife would get up at 3:00 a.m. to pray the Rosary each night, and then taught all three of their young sons how to pray the rosary.

We know that Jesus commissioned the apostles to make “disciples of all nations” in his last words before he ascended into Heaven (Mt. 28:19). And so, it was fitting that Juan Carlos followed in his master’s footsteps with his last words. He told his wife that he could feel the end was near and then said, “it’s your turn to spread the Gospel now.”

The resurrection and what it means for how we live our lives is what truly matters. Juan Carlos was convinced that every decision he made, every action he took, and word he said participated in God’s plan for him and the world. This Easter season let us all open our hearts to the graces of the Jesus’ resurrection and the unfolding of his plan in our life. Let each of us pray for a deeper faith and intimacy with Jesus, so that we may invite others to encounter him. May we live without fear, trusting in the Father’s love and plan for us, for Jesus “…has been raised just as he said.”