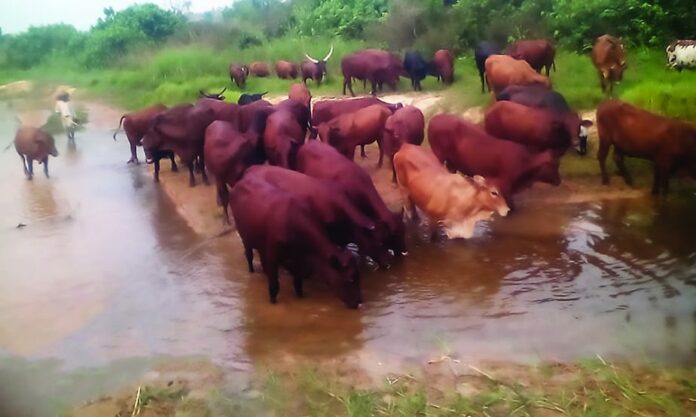 Thanks to the support of local parishes through the Missionary Cooperative Plan, a diocese in Democratic Republic of Congo now has a starter herd of cattle, which means hope for meeting future needs.

Cattle are fundamental to the people of rural Africa, providing food and a means of financial support. Before civil wars devastated DR Congo’s economy, the Diocese of Kabinda in Congo-Kinshasa had a thriving herd of 1,500 cattle. Sadly, during the conflicts, rebels stole the herd.

This summer, Congo native Father Kibambe Crispin, parochial vicar at St. Therese Parish in Aurora, made a Missionary Cooperative Plan appeal to three parishes of the Denver Archdiocese to buy cattle for his home diocese. Through the generosity of parishioners—particularly Risen Christ Parish—$36,000 was raised, enabling the Kabinda Diocese to buy two-dozen cattle, which could eventually grow to a herd of 250.

“The diocese can get money in the future (from these cows),” explained Father Crispin, adding that it plans to sell cattle, meat and manure from the herd. Ideally, the Kabinda Diocese would like to have a herd of 100 cattle to expand to create a sustainable source of income for its needs.

“The diocese is facing a lot of challenges: there is no car for it; parish rectories aren’t in good condition; churches need repainted. We want to build a school in each parish,” Father Crispin said. “If someone would like to help they can send donations to the Diocese of Kabinda through the Missionary Cooperative Plan.”

Located in central Africa, the Kabinda Diocese is home to over a half-million Catholics. It has 30 parishes, 65 priests, 160 lay religious and 59 seminarians.

Although rich in natural resources, political instability, corruption and a lack of infrastructure have kept the people of DR Congo among the poorest in the world. Despite the nation’s problems, the Catholic Church has remained a constant stabilizing force, leading scholar Michael Schatzberg to describe the Church as DR Congo’s “only truly national institution apart from the state.”

The Missionary Cooperative Plan, a project of the Denver Archdiocese’s Social Ministry Office, works to foster the spirit of mission outreach. Each year, in partnership with the Society of the Propagation of the Faith, representatives from Catholic organizations visit parishes to share their experiences and ask for financial support and prayers. St. John Paul II described the necessity of missionary outreach in the encyclical “Redemptoris Missio,” saying: “Local churches … must always maintain an effective sense of the universality of the faith, giving and receiving spiritual gifts, experiences of pastoral work in evangelization and initial proclamation, as well as personnel for the apostolate and material resources.”

Although economically poor, the people of Africa are rich in faith, boasting one of the world’s largest Catholic populations (158 million) and turning out a high percentage of the Church’s priests. Father Crispin is among the priests his homeland has shared with the Denver Archdiocese.

“My presence here is a blessing (for me),” he said about ministering in Denver, adding that it’s a grace meant to be shared with Catholics back home. “My wish is to help my diocese.”