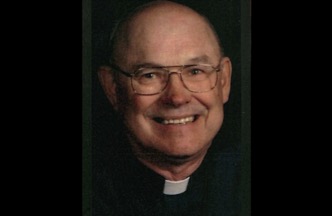 Richard Francis Pelis was born Aug. 27, 1939 to Francis and Stella Pelis in Greenfield, Mass.  He was baptized at Sacred Heart Parish in Greenfield Aug. 6, 1939. Much of Richard’s free time was spent working at the local farm until his was 18 years old. After graduating from Greenfield High School, he enrolled at the University of Massachusetts and then the University of New Hampshire, majoring in Forestry Management. Soon after leaving the University, he was employed by the United States Department of Agriculture in the Forestry Service where he worked in a variety of locations as a Forestry Technician. In 1977, he accepted a position in Colorado where he and his family took up residence in Longmont. He also spent six years in the Army National Guard.

While in New Hampshire, he met Diane Staples. They fell in love and were married on the Jan. 27, 1962. Their Marriage Sacrament took place at Sacred Heart Parish in Greenfield, Mass., the same location where Richard was baptized. The couple was blessed with four sons: Frank, Kirk, Mike, and Paul. They also have two grandchildren.

In 1989, Richard was accepted into the Diaconate Formation Program. After years of struggling with his calling to Holy Orders, Archbishop Francis Stafford laid hands on him, ordaining him to the Order of the Diaconate at the Cathedral Basilica of the Immaculate Conception on June 11, 1994.  His first assignment was at St. Louis Parish in Louisville.  Deacon Pelis was also assigned to Sacred Heart of Jesus in Boulder and the mission parish of St. Rita’s in Nederland. His focus was on helping adult children of alcoholic parents and serving the elderly. He also had a strong passion for the spiritual aspects of ministry.

“To know Deacon Richard is to understand that life does not end in death,” said Deacon Joseph Donohoe, Director of Deacon Personnel. “His yearning for a deeper servant relationship with Jesus Christ was a catalyst for his diaconal ministry.  May we also be zealous in seeking to know the true meaning of life and the human condition.”