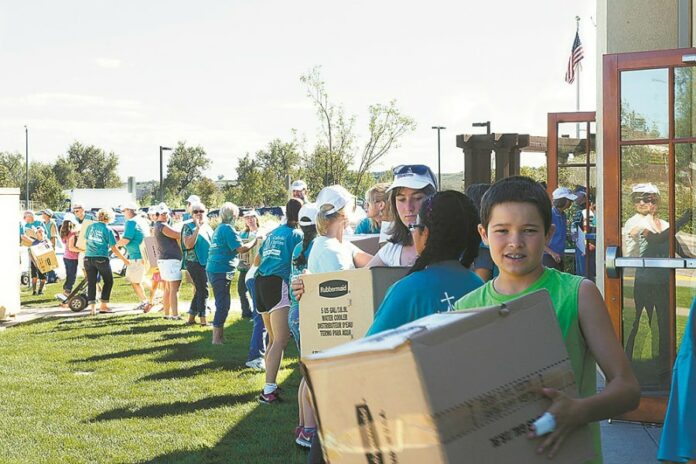 When the Catholic community in Windsor was called on to help victims of Front Range flooding there was no hesitation. They’ve “been there”—and not all that long ago.

“A lot of us were hit by the tornado in 2008,” explained Kathy Zrubek, a parishioner of Our Lady of the Valley Church in Windsor. “We’ve been on the other end of this.”

Zrubek’s home with her husband Mike and their four children was destroyed in May 2008 when a mile-wide tornado tore through the Weld County town of 20,000; destroying 80 homes and damaging another 700.

“We’ve been through a disaster,” she said. “Often it’s hard to ask for help but that’s what we’re here for, just like people were there for us.”

The Zrubeks are among 100-plus volunteers that have been working at Our Lady of the Valley since Sept. 21 when the church became the primary receiving hub for Catholic Charities of the Archdiocese of Denver’s disaster relief efforts following Sept. 11-15 flooding rains that damaged some 16,000 homes in northern Colorado.

The parish of about 1,200 families also serves as a distribution center providing aid, along with St. John the Evangelist Church in Loveland and St. Mary Church in Greeley.

There were several reasons Larry Smith, president and CEO of Catholic Charities, called Father Gregg Pedersen, pastor of Our Lady of the Valley, to request his parish take on the intake responsibility. For one: geography.

“It’s right in the middle of the areas hardest hit,” said Smith, including nearby Loveland, Greeley, Fort Collins, Johnstown, Milliken and Evans.

Secondly, the recently constructed campus, dedicated September 2011, has a large hall that provides considerable storage space. Boxes of supplies—such as cleaning products, buckets, bins, non-perishable food, water and other drinks, coolers, medical supplies and toiletries—have continued to arrive via semi-truck since Sept. 21. The trucks are unloaded by volunteers to store at Our Lady of the Valley, or they are transported to one of the other centers in Loveland or Greeley.

Smith expressed his gratitude to parishioners, as well as Father Pedersen, for their hard work and zeal.

“The response has been phenomenal,” Smith said. “They’ve really embraced the need to give back … hundreds of volunteers helped set up and man the site.

“Father Gregg is like the ‘dream priest’ for this activity,” he continued. “He’s enthusiastic, detailed and a staunch supporter of helping those in need.”

Father Pedersen, ordained May 2011, served as parochial vicar at Our Lady of Loreto in Foxfield before moving to Windsor three months ago. He attributed experience there, including a leadership role in planning vigils and funerals following the Aurora theater shooting July 12, 2012, in helping to hone his organizational skills; as well as a great parish staff in Windsor.

“From the beginning of the floods, we were asking ‘What can we do?’ Let’s do something!’” he relayed. “I was really excited (to be called on by Catholic Charities) … we have the space and we have the generous parishioners to do this.”

As efforts in Windsor have grown, it’s become an ecumenical group with members of The Church of Jesus Christ of Latter–day Saints and the Greek Orthodox Church joining in.

“It’s bigger, better and more organized than anything we could’ve done on our own,” Father Pedersen said of Catholic Charities’ leadership. “There’s a lot of momentum here, and I know the Lord will take care of us.”

More volunteers and donations are needed. For more information, contact one of the parishes (see accompanying box) or Catholic Charities at 303-742-0828 or visit www.ccdenver.org.

“Come in for an hour or two,” Zrubek said. “If everybody does a little, it really adds up to a lot.”