His Church. Our Experience.
Subscribe
HomeLocalCelebration to support ministry to chronically homeless
Local 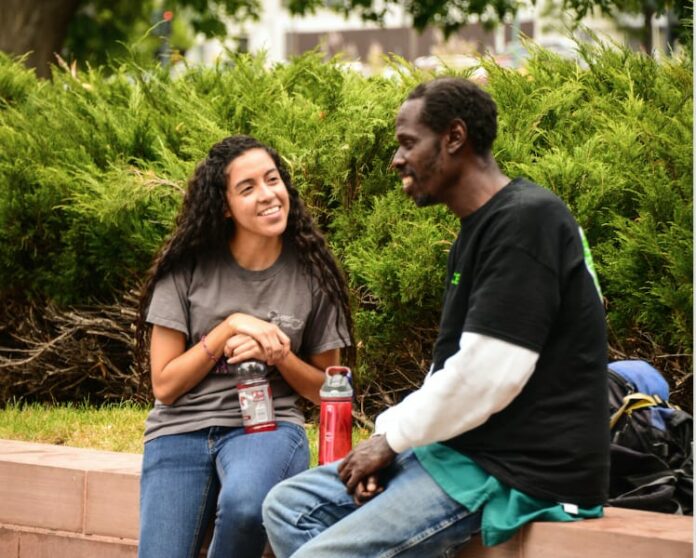 Their homeless ministry is unique and so is their “gala,” which helps support it.

Christ in the City is a Catholic nonprofit born in Denver that forms young adult missionaries to know, love and serve the chronically homeless. Erin McCrory, managing director of the ministry, said the public perception of the homeless is based on a highly visible but small percentage of that population.

“Of the homeless population, 80 to 90 percent are homeless temporarily,” she said, adding that sadly, “10 to 18 percent become chronically homeless.”

The chronically homeless, McCrory said, are those often seen on street corners. They’re the ones who are most likely to have substance abuse (18 percent) and/or mental health (23 percent) issues.

Other surprising facts: More than half of all Americans live paycheck to paycheck so when they lose their job—unemployment is the No. 1 cause of homelessness—they often reach out to family, friends or homeless services and bounce back fairly quickly: typically a few months to a year. Not so with the chronically homeless.

“They’ve told us that once your reality becomes eating out of garbage cans and you don’t hear your name spoken for months at a time, you accept this is your reality,” McCrory said. “Their spirits are broken and they are lacking in hope and faith in people.”

Described as “service resistant,” they don’t avail themselves of services because they don’t believe they’re worthy of them, which leads to isolation and loneliness, McCrory said. So Christ in the City goes to them. Young missionaries—25 who volunteer for one to two years and receive spiritual and academic formation—walk the streets searching them out, learn their names, serve quality lunches to them in parks and sit with them as they eat, offering community. They befriend them—as Christ would have done.

The ministry will be offering that same Christian hospitality and friendship to guests of their upcoming gala, “Knowing, Loving and Serving the Poor,” set for 6 p.m. Oct. 7 at Holy Name Parish in Englewood.

The missionaries will emcee the event, which starts with a cocktail hour outside under tents, followed by a delicious dinner hosted by the missionaries who will sit at the tables with attendees. Program includes a video about the ministry, the presentation of the Father Woody Award to Michael Malloy, longtime director of case management at Samaritan House Homeless Shelter, and an “unconventional” live auction.

Tickets are $125 per person. Table sponsorships are also available. RSVP by Sept. 30 by visiting www.christinthecity.givingfuel.com. Questions: email events@christinthecity.org or call 303-952-9743.