His Church. Our Experience.
Subscribe
HomeLocalBishop Barron: How the Church can defeat relativism
Local

Bishop Barron: How the Church can defeat relativism 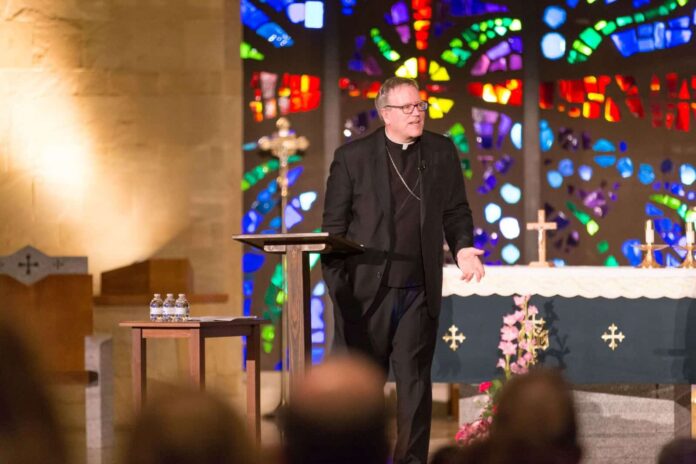 Bishop Robert Barron of Los Angeles, best known for his Word on Fire Ministry, spoke about the origins of relativism, the challenges it brings to evangelization and the different ways to engage it at the St. John Paul II Lecture Series, he Immaculate Heart of Mary Church in Thornton, Colo., Feb. 6.

Bishop Barron called all the faithful to action after explaining the genealogy and challenges of relativism that is embedded in today’s society.

“We Catholics need to be right in the center of the culture, right in the middle of the public conversation, and speaking against this flattened-out, trivializing relativism, in favor of… great objective values,” he said.

To understand the problem of relativism – the view that there is no absolute truth, only particular truths conditioned by culture, space and time – Bishop Barron spoke about its origins in voluntarism and Cartesian subjectivism.

“The coming together of the voluntarist and Cartesian strains provides the breeding ground for much contemporary relativism, namely the subject’s assertion of truth through a sovereign act of the will… In other words, ‘I decide. My freedom decides,’” he said.

Voluntarism is the idea brought about in the Middle Ages that God’s will trumps his intellect, meaning that whatever is true is so because God willed it. This philosophy would lead to see God as a threat and eventually to get rid of him, as Ludwig Feuerbach did, reducing him to a mere invention of the human mind, Bishop Barron explained.

Nietzsche and Sartre built on this idea and considered the human person beyond truth, meaning that freedom came first and the greatest threat to a person’s freedom was God. Nietzsche would then use this premise to proclaim God “dead.”

Bishop Barron mentioned some of the many dangers that this voluntarist relativism brings to those who want to announce the Gospel: A frustration of the mind’s desire for truth, its radical individualism and spiritual laziness.

“The minute you say will trumps the intellect, that means the intellect’s desire to know, which is one of the most fundamental drives we have, is… frustrated,” the bishop said. This causes “restlessness of the heart and deep frustration of the mind” in young people because they feel they cannot grasp something solid.

Relativism also produces radical individualism and hence, necessarily, divisiveness, he said. If there are only different wills and freedoms, there’s room for “toleration” but no connection to a common truth, value or purpose: “Objective truth, in fact, is one for the most powerful forces that draws us together.”

Bishop Barron recalled Cardinal John Henry Newman’s metaphor of the river to illustrate how voluntarist relativism produces spiritual laziness. “It is the objectivity of the good and the true that give drive and energy to the human project,” he said. Like a river, if the banks are taken away in the name of freedom, it will turn into a lazy lake.

“[Because of relativism], many young people are floating in a lazy lake without purpose or drive,” he added.

Drawing on Dietrich von Hildebrand’s distinction between the subjectively satisfying and the objectively valuable, he said that the Church should continue to be the one to unleash the power of objective values that transform the human person.

That which is subjectively satisfying is something that not everyone has to like, such as pizza, he explained. Nonetheless, there are real objective values that in their goodness, truth or beauty, transform the human person and rearrange his subjectivity, such as seeing the Sistine Chapel or listening to Beethoven’s 9th Symphony.

“Relativism flattens out life,” he said. “We take the best things and we trivialize them to the level of pizza.”

Finally, he distinguished between freedom of indifference, which reduces to the freedom to personally decide something, and freedom for excellence, which he defined as “the disciplining of the desire to make the achievement of the good, first possible, then effortless.”

The main difference is that freedom of indifference makes an enemy out of law, while freedom for excellence internalizes the law to make it part of who he is, Bishop Barron explained. Internalizing the law helps the person become what he is meant to be, in congruence with God and the deepest purposes of his being.

“It’s the Church above all that speaks these abiding, objective truths that ground true and authentic freedom,” Bishop Barron concluded. “That is the best way to engage relativism… We acknowledge it and then we… redirect it.”