His Church. Our Experience.
Subscribe
HomeLocalYou’ve met this Mary, but have you read her?
Local

You’ve met this Mary, but have you read her? 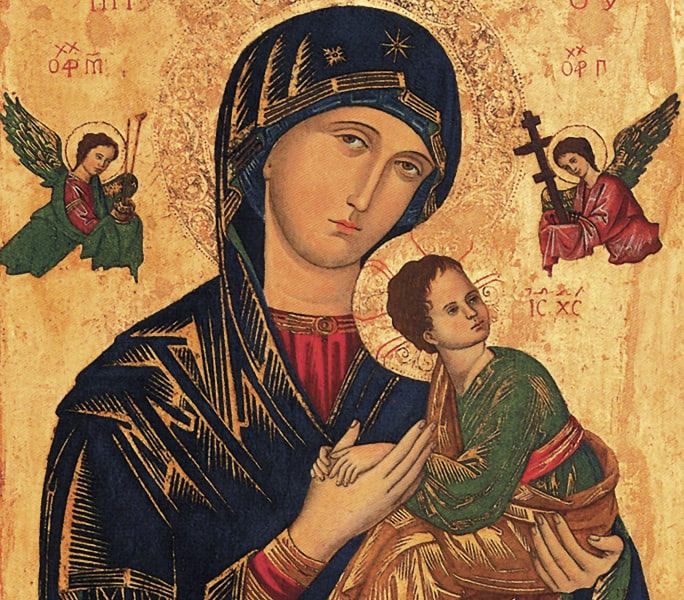 She may be the best-known image of Mary in the western Church.

Our Mother of Perpetual Help is a Byzantine icon that dates back to the 15th century and is enshrined in the church of St. Alphonsus Liguori in Rome. Her name comes from the many miracles attributed to her.

Now that the Congregation of the Most Holy Redeemer order has successfully made her famous, they want to make sure you also hear her message.

“She is more than a beautiful sacramental,” Redemptorist Brother Dan Korn, an expert on the icon who gives talks and retreats on it across the globe, said from his office in Liguori, Mo. “Icons are the Gospel in image form.”

“Our Mother of Perpetual Help icon is about the mystery of redemption,” Brother Korn explained. “The incarnation, passion, death and resurrection of Jesus are proclaimed through the elements in the image.”

Last month the Redemptorists, a missionary order founded by St. Alphonsus Liguori, started a yearlong celebration leading up to April 26, 2016, which will mark the 150th anniversary of their filling a pontifical mandate to protect and promote the image.

Armed with new knowledge they have about the icon, they have a new mission.

“For the next 150 years, we want to spread the message contained in the iconography,” Brother Korn said. “We want to teach people how to read and pray the icon.”

The Gospel in images

The Redemptorists were entrusted the image in 1866 by Blessed Pope Pius IX who told them to “Make her known throughout the world!”

“We have done that very effectively,” Brother Korn said. “But it’s only since 1990 that we have understood in depth the iconography.”

That year, because the icon was showing signs of wear, the order had it restored by Vatican Museum experts and gained a deeper appreciation for its rich symbolism.

“When we were given this beautiful piece of sacred art from the Byzantine tradition, we didn’t understand it, but now we do,” Brother Korn said.

“Christian icons express in images the same Gospel message that Scripture communicates by words,” notes the Catechism of the Catholic Church (1160). “Image and word illuminate each other.”

That’s why icons are described as being “written,” rather than “painted,” Brother Korn said, adding that one can only understand their message if they can “read” the symbols in the image.

“Reading it leads us into deep prayer,” Brother Korn said. “The icon’s elements are all ‘windows’ … into divine mystery.”

“(Our Mother of Perpetual Help) is a mirror of redemptive love, meaning that everything in the icon is about how we have been redeemed by Christ,” Brother Korn said.

Our Mother of Perpetual Help’s message is shared in five key elements: Mary’s face, her hands, the Christ child, the angels, and the color gold.

“Those are the five ‘chapters’ we read in the icon,” Brother Korn said, adding that symbols were vital in the Middle Ages when most of the population couldn’t read words.

Jesus, as if straining toward his mission to redeem humanity, is looking over his shoulder at the Archangel Gabriel who holds the cross and nails of Christ’s future crucifixion. His gold sandals represent his divinity.

“This is a Greek icon and in Greek hierarchy only the prince of the king wore gold sandals,” Brother Korn explained. “The falling gold sandal … is symbolic of Jesus’ humility in taking on our humanity.”

The veil above Mary’s face has an eight-pointed star, which is an ancient sign used to identify the Mother of God. Her sad eyes catch the viewer’s attention and draw them into the image. Her veil exposes a bit of her right earlobe, which signifies listening. Across from her ear is a tiny mouth, which represents silence.

“Her face is telling us that in order to listen to the word of God we must be silent in his presence,” Brother Korn said.

The angel holding the cross and nails is bowing toward Mary, who bows toward the angel, signifying this is Archangel Gabriel of the Annunciation.

The angel holding a jar of gall, a lance and a sponge on a stick from Christ’s passion and death, represents Archangel Michael, who is the Old Testament protector of Israel and the New Testament guardian of the Church. He is protecting the Virgin and Child and the person viewing the image.  (Greek letters in the icon also identify the angels, the “Mother of God” and “Jesus Christ.”) One hand is cradling the infant Jesus while the other holds his hands. Mary’s upper hand points to the child’s heart, and beyond that to the cross.

“The Blessed Mother is presenting Jesus to the person praying before (the icon),” Brother Korn said. “This is the Gospel message she is proclaiming: the Incarnate, Crucified, Risen Word of God.”

The gold in the background and on the characters denote the Kingdom of God and God’s grace.

“The gold is the light of God coming through (the figures) into us,” Brother Korn said, adding that it signifies the grace of God that transforms us.

“Mother of Perpetual Help, your glory we celebrate, your icon we venerate. Work new signs and wonders in this your jubilee year. O holy Mother of God, show us Christ your Son. Amen.”

In 1894, just 24 years after the railroad reached Denver, the Redemptorists accepted a request from Bishop Nicholas Matz to serve St. Joseph Parish in downtown Denver.

The missionary order, whose official name is Congregation of the Most Holy Redeemer, arrived to a parish sparse of people and dense with debt. Soon their work resulted not only in solvency, but eventually a large and devout congregation.

“God bless the sons of Liguori,” Bishop Matz wrote. “This boon I shall never forget.”

Other Redemptorists also served at parishes in Greeley and Fort Lupton, and the outlying missions in Eaton, Ault, Platteville and Wattenberg.  The Redemptorists returned St. Joseph Parish to the Archdiocese of Denver in 2005.

Although they no longer operate parishes in the archdiocese, their presence continues as the headquarters for the order’s Denver Province, which was established in 1996, is located here.

Eight Redemptorists currently living in Denver help out at local parishes throughout the archdiocese.

The Redemptorists are a missionary congregation of priests and brothers founded in 1732 by St. Alphonsus Liguori in Naples, Italy. Some 5,000 Redemptorists are presently ministering among the poor and most abandoned in nearly every part of the world.

Everywhere the order goes, they spread devotion to Mary under her title Our Lady of Perpetual Help, and many parishes in the Denver Archdiocese continue to hold Perpetual Help novenas one night a week.

Last month the order began preparing to mark next year’s 150th anniversary of protecting the original 15th century Perpetual Help icon, housed at St. Alphonsus Liguori Church in Rome, and promoting the devotion, which they were charged with by Blessed Pope Pius IX on April 26, 1866.

Redemptorist parishes in the United States will send representatives to St. Alphonsus “Rock” Church in St. Louis on June 26, 2016, the feast of Our Lady of Perpetual Help, for a jubilee celebration at the site where the weekly Perpetual Help novena began in North America. The “Rock” Church is an official pilgrimage site for all who visit the shrine in 2016, a spokesman said. The order is also organizing pilgrimages to pray before the original icon in Rome.