“Your hearts must burn with love”: Six men ordained to diaconate (PHOTO GALLERY) 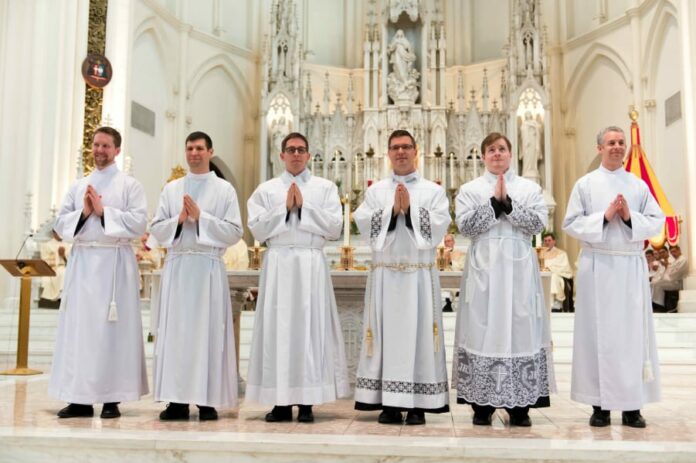 Six men were ordained transitional deacons Feb. 7. During the ceremony at the Cathedral Basilica of the Immaculate Conception, Archbishop Samuel J. Aquila reminded the men that they are both chosen by Christ and called to be a gift.

“The work of a vocation is the work of God. It is a call of God that is given, and one is chosen. And in that choosing, one must open his heart to serve the Lord and respond to the call, saying yes to that call,” he said.

He reminded the men of the virtues St. Paul asks for in Ephesians 4:2. These virtues include humility, patience, and bearing with one another through love.

“All of those virtues are rooted in the virtue of charity. You, my dearest sons, are called to strive and desire those virtues,” Archbishop Aquila said.

The archbishop then reminded the men that they must remain in the love of Christ.

“As a deacon, and later as a priest, you will be called to lay down your life, to make your life a total self-gift to Christ and to the Church. It means not seeking for yourself, but rather for the good of others.”

He then reminded them that the diaconate is a position of service.

“Your hearts must burn with love for Jesus and the people that you serve,” he said.

The seed for Daniel Ciucci’s path to the priesthood was planted in 8th grade. “A mother in my parish said, ‘Daniel, I think you’re going to be a great priest some day,’” Ciucci said. “I was really disinterested in the priesthood and did not really take that invitation to heart, [but] from that point on the Lord was asking me to ask him if I was open to the priesthood and to just dialogue with him in that.”

It wasn’t until Deacon Pawel Zborowski from St. John Vianney was assigned to his parish that he became truly open to the call of the priesthood.

“He really touched me and gave me the courage to say, ‘OK Lord, I’m open to what you want.’”

He entered the seminary after college.

Ciucci said there’s something freeing and scary in his ordination to deacon all at once.

“It’s a moment for me to realize this is a part of death to the self, that we’re professing resignation of will and intellect to something way beyond ourselves,” he said.

Shaun Galvin
Age: 32
Hometown: Grew up all over
Parish: Our Lady of Lourdes, Denver

Shaun Galvin grew up Catholic, but it wasn’t until college that he began considering the priesthood. “I went on the Buffalo Awakening retreat at CU Boulder my freshman year, [where] I had a more real experience of God,” Galvin said. “I finally said, OK God, you exist,’ and from that point on I started getting involved in the Church.”

At this point he began questioning what God wanted for his life. He discerned whether or not the Lord was calling him to marriage or the priesthood for four years, and eventually God gave him an answer, which led him to St. John Vianney Seminary in Denver.

Galvin has been inspired most by St. Padre Pio and St. Damien of Molokai, he said. He hopes the graces of ordination enable him to continue growing in the love of the people of God.

As a deacon, Galvin is most excited for, and most fearful of, preaching.

“I’m looking forward to getting to help people get to know God through the Word of God, but it’s also a scary spot to have that responsibility,” he said.

John Mrozek didn’t think the day of his ordination into the diaconate would ever come. “Honestly, I did not think I was going to make it through seminary,” Mrozek said. “Now, I suppose I can give myself permission to look forward to ordination. However, I have learned that if you ever want to make God laugh, tell him your plans.”

Upon taking the profession of faith and oath of fidelity, Mrozek said his relationship with the Church has changed into a marriage, and these oaths require him to be loyal to his spouse, the Church.

“I can only pray that by the grace of God and the intercession of the angels and saints, I can hope to be as good to my wife as she is to me,” he said.

Mrozek jokes that he’s becoming a priest because he couldn’t stand the homilies he listened to when he was younger. He’s most looking forward to preaching.

“I told God I could do better. I guess he has given me my chance,” he said.

Nicholas Larkin heard the call to be a priest when he was three years old. Larkin has vivid memories of watching coverage of Pope St. John Paul II’s visit to Denver in 1993 for World Youth Day on his grandparents’ television. This event changed his life.

“I decided that I was going to become Pope at that point in time,” Larkin said. “Then I was told by family members that you have to be a priest before becoming Pope, so it seemed like a natural step.”

Now, seven and a half years after entering the seminary, Larkin is taking the next step towards the priesthood.

He hopes to live into the servanthood of Christ in an even deeper way after being ordained.

“I desire to receive the grace just to be able to live Christ’s own servant mysteries,” he said. “The word deacon means to be a servant, so the deacon is ordained in the person of Christ the Servant. I want to imitate Christ in his own servanthood.”

Peter Wojda came to the priesthood through the Fellowship of Catholic University Students (FOCUS). Wojda attended college at Purdue University in Indiana. He got involved in a local young adults Catholic group, where he met people who knew, lived and loved their faith, he said.

“I felt convicted I needed to be the same way,” Wojda said.

After college, Wojda considered the priesthood, but wasn’t fully sure that’s where God wanted him to go. Around this time, he was introduced to FOCUS. He joined as a missionary. FOCUS brought Wojda to Denver, where he stayed. After several more years if discernment and figuring out what God was asking of him, Wojda felt that the priesthood was indeed where the Lord was leading him to.

“I realized I had done as much discernment as I could outside of seminary, and the next step was just to enter seminary,” Wojda said. “There was nothing else I could do, and it’s turned out far better than I thought.”

Joseph Grady’s sense of adventure was likely a contributing factor to his decision to become a priest. Grady was a Boy Scout for 10 years growing up, and his Eagle Scout project was installing the Stations of the Cross in the backyard of the Frassati House at Nativity of Our Lord Parish in Broomfield.

Grady entered St. John Vianney Seminary in 2007. He was an exchange student in Germany for several years. After his Spirituality Year, Grady took supplemental classes at Regis University in addition to his coursework at St. John Vianney and earned a philosophy degree from the Pontifical Lateran University.

Grady’s studies eventually took him to Rome, where he has been studying theology at Gregorian University for the past two years.

Grady is most inspired by St. John Paul II and Luigi Giussani, he said. As a deacon, he is most excited about serving at mass.