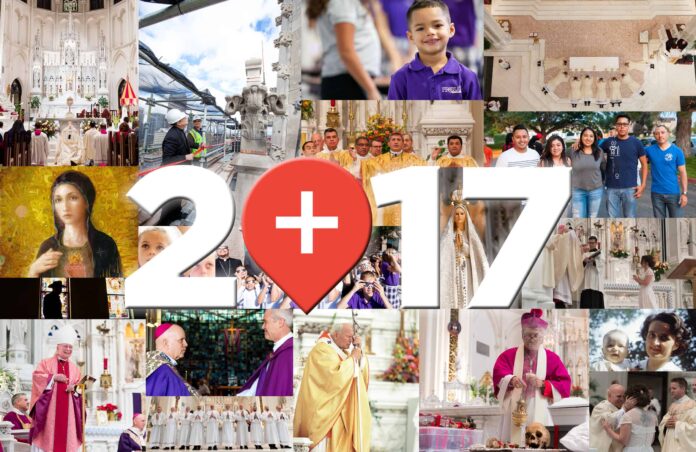 When the year 2017 is looked back on as a chapter in the rich history of the Archdiocese of Denver, it will likely be remembered as a year dedicated to Mary. It was 100 years ago that Our Lady appeared to three young shepherds in Fatima, Portugal, delivering a profound message of hope that has lasted over a century. 2017 was also the year that Archbishop Samuel J. Aquila would consecrate the archdiocese to the Immaculate Heart of Mary, honoring her apparition at Fatima but also reminding the faithful of her everlasting presence among us and her crucial role in always directing us toward her son.

2017 was also a year of excitement for the Catholic Church of northern Colorado. The excitement came in many different forms – a new school, two new parishes, eight new priests, nine new permanent deacons, and the possibility of Denver’s first saint – and proved that the Catholic faith is alive and well here in Denver.

Of course, 2017 brought with it some challenges as well. 500 years ago, Martin Luther split off from a corrupt Catholic Church and ushered in the widespread splintering of Christianity that exists to this day, and this year was a time for the Church to humbly acknowledge its broken past, but also to continue to work toward the unity that Christ intended for it. Furthermore, the Church raised its voice to challenge legislation that could negatively impact the lives of millions of immigrants who are as much a part of this country’s history as its natives.

This contrast between positive and negative is telling of the Christian life. It’s not always easy, and sometimes we’re forced to examine our consciences and reconsider what it really means to be a disciple of Christ. However, hope that something better is on the horizon always remains. Here’s a look back at the faith-filled year that was 2017.

Archbishop Samuel J. Aquila and 6th grade students at Frassati Catholic Academy practice viewing the solar eclipse through special solar-viewing glasses on the first day of the brand new school Aug. 21. Archbishop Aquila blessed and dedicated the school, which was the first new school to open in the Archdiocese of Denver since 2012.

A step toward Christian unity

On March 19, Archbishop Aquila co-presided over a prayer service alongside Lutheran Bishop James Gonia of the Rocky Mountain Synod to commemorate the 500th anniversary of the Reformation. The service was held at Bethany Lutheran Church in Denver, and marked an important milestone in local ecumenical relations between the Catholic and Lutheran churches.

Eight priests ordained on Feast of Our Lady of Fatima

On May 13, the 100th anniversary of the apparitions of Our Lady to the young shepherds at Fatima, eight men were ordained to the priesthood for the Archdiocese of Denver. Speaking of Mary’s example, Archbishop Aquila urged the men to stay rooted in the virtues of humility, patience and charity in their own priesthood.

In June, we wrote a story about John Calderon, better known as “Cowboy John” to those in the community of Glenwood Springs who know him. Calderon is a Catholic convert whose life was radically changed by Christ after an encounter with him. He pours out the love that Christ poured into him by helping homeless people around the town. Calderon was one of several inspiring stories of faith we discovered throughout the year.

In what was a historic first for the Archdiocese of Denver, the exhumed remains of a potential saint were laid to rest at the Cathedral Basilica of the Immaculate Conception June 7. At the transfer ceremony, Bishop Jorge H. Rodriguez proudly proclaimed of the former slave to an applauding congregation, “[Julia Greeley] will be the first person buried in Denver’s cathedral. Not a bishop, not a priest – a laywoman, a former slave. Isn’t that something?”

The faces of DREAMERS in the Archdiocese of Denver

The repeal of the Deferred Action for Childhood Arrivals (DACA) earlier in the year raised several questions. What will happen to the 17,000 beneficiaries of DACA currently residing in Colorado? What does this mean for future children born to immigrant parents? And perhaps most importantly, what role does the Church play in helping those affected? The answers to these questions are not readily apparent, but the conversation spurred this past year will hopefully lead to some.

Investing in the Cathedral’s future

Repairs to the Cathedral Basilica have been underway since 2016, but as pastor Father Ron Cattany pointed out this past year, there’s still a lot of work to be done; $2.3 million worth of work, to be exact. The 105-year-old mother church of the archdiocese is embedded in the very history of Colorado, and Father Cattany urges the faithful to consider investing in its future so it can stand as Denver’s mother church for many years to come. “[We] need to keep it functional, [we] need it evangelical in terms of serving people, and [we] need to keep it safe so people feel comfortable to come here.”

It’s essential that your marriages stand out,” Archbishop Samuel J. Aquila told nine men who were ordained to the permanent diaconate June 17 at the Cathedral Basilica of the Immaculate Conception. “As deacons, you will be called to serve in numerous ways,” he said in his homily before the ordination of nine permanent deacons and one transitional deacon. “Always remember that marriage is your first vocation, and that your marriage must come first.” At the beginning of November, Archbishop Aquila announced that two new parishes would be established in the archdiocese: St. John Paul II in Thornton, and St. Gianna Molla in Green Valley Ranch. “It’s not that often that bishops are able to announce the kind of good news I am about to share with you,” Archbishop Aquila wrote of opening the new parishes. They serve as a testament to the rapidly growing faith community in northern Colorado.

‘My Immaculate Heart will triumph’

On the centennial of Our Lady’s final apparition to the Fatima children and the Miracle of the Sun on Oct. 13, hundreds were gathered in the Cathedral Basilica of the Immaculate Conception and thousands more gathered in parishes across the archdiocese as Archbishop Samuel J. Aquila consecrated Denver to the Immaculate Heart of Mary. “As we consecrate ourselves to the Immaculate Heart of Mary, let us pray for faith… to love Jesus as Mary loved Jesus, and pray for peace and let us pray for hope, rooted in the promise of eternal life,” Archbishop Aquila said. “It is only by keeping our hearts fixed on Jesus that this will come about.”

On Nov. 4, Bishop Jorge H. Rodriguez celebrated a Spanish-language Mass in the Cathedral Basilica of the Immaculate Conception for all immigrants, their families and those who support them. The Mass fell on the Solemnity of Christ the King, which holds a special meaning for the Mexican community. During the religious persecution at the beginning of the 20th century, many Christians bravely proclaimed the motto, “¡Viva Cristo Rey!” (“Long live Christ the King!”), before being killed, and this same spirit was echoed within the immigrants gathered at the Mass in regards to their future here in America.