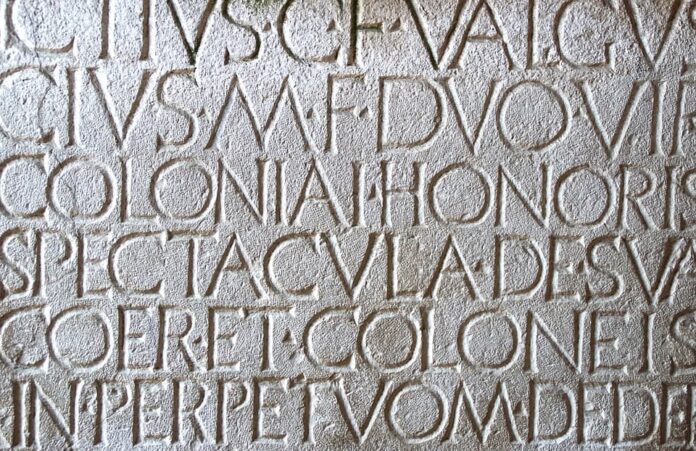 Ave Maria, Gloria in excelsis, Agnus Dei, Dominus Vobiscum, Sanctus, Tantum Ergo. These are just some of the Latin phrases that Catholics may recognize. Although it’s common to speak of Latin as a “dead” language, it remains alive within the Church, her sacred language of prayer, study, and unity. Pope Benedict XVI asked Catholics to learn the basic prayers of the Mass and the rosary to be able to pray together throughout the world. This common language roots the Latin rite of the Church in a common identity and heritage. A sacred language also points to the transcendent mystery and reverence of the Mass, moving beyond the ordinary language of one’s daily routine.

Not only has Latin served as the language of the Church since the third century, it also has provided the key language of education and learning. The great Cicero translated many works of Greek philosophy into the language of the Romans and himself became the chief model of polished writing. After the fall of the Empire, Roman Christians, particularly Boethius and Cassiodorus, sought to continue the study of the Latin language, writing textbooks of grammar and forming libraries to pass on ancient literature. The monasteries became centers of Latin grammar, using the writings of Virgil to provide a literary standard to study the Bible and for the Church’s liturgy, teaching, and legal tradition. Latin became the lingua franca of the Middle Ages and the language of the universities. Even modern writers have found within the ancient tongue their training ground of elegant expression and a literary tradition to guide their own work.

The reliance on Latin suddenly ceased, not only with the introduction of the vernacular in the Church’s liturgy but also with the decline of liberal education. Recognizing this decline, even in the very year the Second Vatican Council commenced, Pope St. John XXIII pointed to the sacred role of Latin in the Church and its important role in preserving her tradition and promoting unity throughout the world. In his letter, Veterum Sapientia, “On the Promotion of the Study of Latin,” he also proclaimed Latin’s crucial role in education: “There can be no doubt as to the formative and educational value either of the language of the Romans or of great literature generally. It is a most effective training for the pliant minds of youth. It exercises, matures and perfects the principal faculties of mind and spirit. It sharpens the wits and gives keenness of judgment. It helps the young mind to grasp things accurately and develop a true sense of values. It is also a means for teaching highly intelligent thought and speech.”

Somewhat more recently, a plea for Latin’s return to education within the United States has appeared in Tracy Lee Simmons’ Climbing Parnassus: A New Apologia for Greek and Latin (ISI Books, 2002). Simmons rightly notes the deep influence of classical learning on the nation’s founders and its guiding presence within our oldest universities and even one room schoolhouses. After expressing the foundational and all-important role of words in education, he notes “the inseparable link between words and thinking” (160). Not just any words, as “good language makes for good thinking,” and not just any language, for Greek and Latin “helped, through their rigor and beauty, to form intellects, to develop minds” (ibid). Engaging in the rigors of ancient grammar teaches language itself, in a much more complete way than found in modern languages. Its complexity and precision leads to discipline within the mind itself, learning the craft of words and the logical thinking needed to form them clearly and cogently.

Some educators recommend Latin for its usefulness in mastering the English language. There is truth to this claim, with a majority of English words deriving from Latin and its derivative languages. More deeply, however, with ancient language, one enters the beauty and power of the masterpieces of the past, not simply reading them quickly in translation, but sitting at their feet and laboring to learn directly from the words of the masters. “Greek and Latin carry in the wake an entire world of thought and feeling” (164). Looking at the great deeds of the past, within our own country and the entirety of our civilization, it is necessary to reconnect to the sources of life that inspired and animated their achievements. In looking to the greats, Simmons advocates, “Don’t merely read about them; read what they read – as they read it” (210).

Many of our Catholic schools offer Latin, and its study opens up for their students a breadth of tradition, thought, and beauty. The language of saints and scholars can inspire our students to read deeply, think rightly, communicate clearly, and to enter more deeply into the mystery of our faith.