Why stay in the Church? 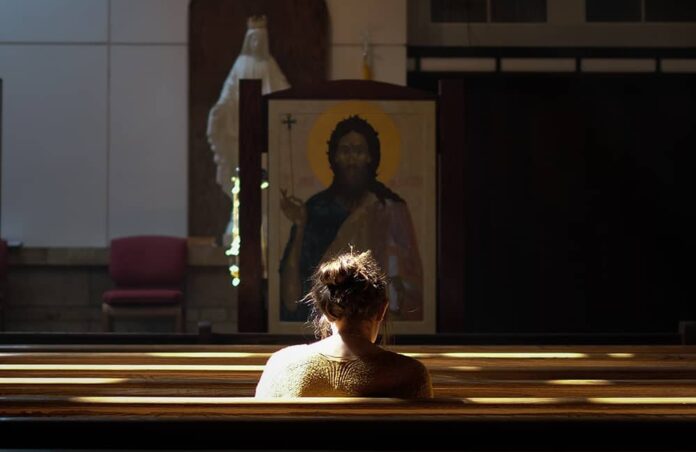 There are many people who have either left the Church or are currently considering leaving because of the scandals of recent decades. We have felt pain and righteous anger at our leaders and have suffered scandal from their betrayal. For some, the grand jury reports and lack of accountability for bishops have been the last straw. It’s hard to blame people for feeling this way, but we have to ask with Peter, “to whom, Lord, shall we go?” (John 6:68).

Significantly, this question comes after many disciples walked out on Jesus for his teaching on the Eucharist, and it is the Eucharist that should be at the center of any response to the crisis. Peter answers his own question: “you have the words of everlasting life” (John 6:68). The Church is Jesus’ own body in the world, and we are members of his mystical body, given eternal life by consuming his own flesh at Mass. Without the Eucharist, Jesus’ presence in the flesh, the very heart of the Church, where would we be?

Bishop Robert Barron echoes Peter’s question in a recent pamphlet-style book, with over a million copies in print, Letter to a Suffering Church: A Bishop Speaks on the Sexual Abuse Crisis (Word on Fire, 2019). He turns to the Bible and Church history to look for perspective on the crisis. Because of the centrality of the Eucharist in the Church, the betrayal of some of our priests and bishops takes on greater significance. They act in persona Christi at Mass, offering the sacrifice of Christ on the Cross to the Father, and we depend on them for our sacramental life.

Fortunately, the validity of the sacraments does not depend upon the sinlessness of priests, but rather the holiness of God. Barron points out, however, that priests will not get off easy, given the extremely harsh words that Jesus offers to those who lead children astray: “Whoever receives one such child in my name receives me;  but whoever causes one of these little ones who believe in me to sin,  it would be better for him to have a great millstone fastened round his neck and to be drowned in the depth of the sea. Woe to the world for temptations to sin! For it is necessary that temptations come, but woe to the man by whom the temptation comes!” (Mt 18:7-9). Barron also references the punishment of Eli, in 1 Samuel 2-4, who as priest and judge of Israel watched his own sons, who were also priests, abuse the people. Barron argues that this scene gives us the best example of God’s retribution for allowing abuse to happen and not correcting it.

Barron also looks at the tumultuous story of Church history for context on the current crisis. Although the Church is the mystical body of Christ, he references St. Paul assertion that we bear our treasure in earthen vessels, as evidenced by the human weakness of Christians throughout history. In fact, this weakness manifests the Lord’s grace guiding and preserving the Church in spite of us. Barron quotes Belloc that a proof of the Church’s divine foundation “might be found in the fact that no merely human institution conducted with such knavish imbecility would have lasted a fortnight” (43). Heresies, sinful popes, and sexual perversity have not fundamentally destroyed the Lord’s work, even if they have turned many people away. God has promised to remain with his Church and his providence will guide us especially through dark moments.

The crisis challenges us and raises the question of why we are Catholic. Most of us have been born Catholic and may take our faith for granted as something we’ve inherited from our parents. We may view belonging to the Church like membership in a voluntary organization. Rather, our life as members of Christ’s Body is a gift from God that changes our identity and unites us to God and our fellow Christians. As we experience challenges to faith, it is an opportunity to embrace this identity even more strongly — not as something that depends upon myself or anyone else in the Church, but on God. We go to Church to honor and thank him and to receive his grace, not to be a part of a human organization.

The Church is a family, called together by God, but, like any family, we experience pain from our own and each other’s sinfulness. As family, we can’t give up on each other, but have to “stay and fight” as Barron exhorts us, helping each other to be faithful to the mission that Jesus gave us: to love one another as he has loved us and to share the Good News of his salvation.