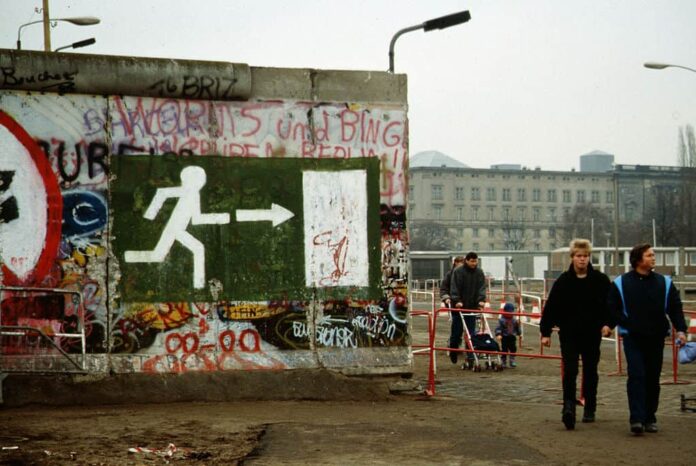 November 9 marked the 30th anniversary of the peaceful breach of the Berlin Wall — the symbolic high point of the Revolution of 1989, which would be completed seven weeks later by the fall of the Czechoslovak communist regime and Vaclav Havel’s election as that country’s president. A few days before the actual anniversary, German foreign minister Haiko Maas penned a brief essay on the reasons why the Wall came down, which was striking for what Mr. Mass didn’t mention.

He did not mention NATO steadfastness against a vast Soviet campaign of agitation and propaganda over western military modernization in the 1980s.

From my point of view, however, the most glaring omission in Mr. Maas’s essay was his complete lack of attention to the pivotal figure in the Revolution of 1989, Pope St. John Paul II. Just as oddly, the foreign minister neglected to mention the moral revolution — the revolution of conscience — that John Paul II helped ignite and that gave the Revolution of 1989 its unique human texture. This is bad history. And bad history always raises warning flags about the future.

Professor John Lewis Gaddis of Yale University is America’s most distinguished historian of the Cold War. He is not a Catholic, so he could not be accused of special pleading or sectarian bias in writing that “when John Paul II kissed the ground at the Warsaw Airport on June 2, 1979, he began the process by which communism in Poland — and ultimately everywhere — would come to an end.” My friendly amendment would be to note (as the Polish pope did) that a lot had been happening in east central Europe before John Paul’s June 1979 pilgrimage to Poland; so the Pope did not so much begin, as he did accelerate, the process of dismantling European communism through an effective nonviolent resistance based on the assertion of basic human rights. And he did that in part by giving the Catholic components of the resistance new courage, rooted in the conviction that “Rome” now had their backs (as it hadn’t in the 1970s).

But I will happily accept Professor Gaddis’s citation of June 2, 1979, as a signal moment in this process. What happened that day? Unbelievably, after more than 30 years of communist repression, a pope from behind the iron curtain celebrated Mass in Warsaw’s Victory Square. And during that hitherto unimaginable event, a vast crowd chanted, “We want God! We want God!”

That dramatic scene was the curtain-raiser on nine days of national renewal in which John Paul, in dozens of speeches and addresses, never mentioned politics or economics once and ignored the Polish communist government completely. Rather, he played numerous variations on one great theme: “You are not who they say you are. Remember who you are — reclaim the truth about yourselves as a nation formed by a Christian history and a vital faith — and you will eventually discover tools of resistance that communism cannot match.” The demand for religious freedom, in other words, was at the center of the John Paul II-inspired Solidarity movement in Poland, even as it became an increasingly prominent part of the human rights resistance to communism in Czechoslovakia, Lithuania, and what was then the Ukrainian Soviet Socialist Republic.

Getting this history straight is important, not just as a matter of intellectual hygiene but for the future. Public officials who do not grasp the centrality of religious freedom to the collapse of European communism and the emergence of new democracies in central and eastern Europe are unlikely to appreciate the centrality of religious freedom to free and virtuous 21st-century societies and to 21st-century democracy. It is a sadness to note that Foreign Minister Maas is not alone in his ignorance, and in what one fears may be his insouciance about the first freedom.

A few days before the 30th anniversary of the Wall coming down, former Irish president Mary McAleese gave a lecture at Trinity College in Dublin. Did she celebrate her Church’s role in liberating a continent? No. Instead, she made the bizarre claim that infant baptism and the consequent obligation of parents to raise their baptized children in the faith may violate the U.N.’s Covenant on the Rights of the Child.

Hard to believe, but true — and an urgent reminder that bad history makes for bad public policy.