Who were the Magi? 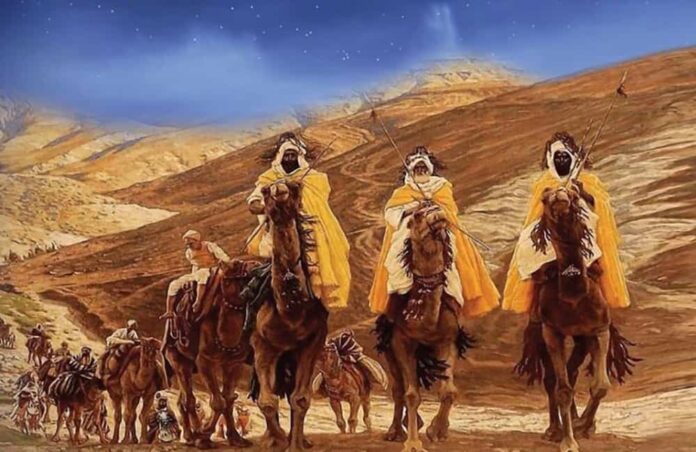 What comes to mind when you think of the wise men presented by the Gospel of Matthew? You might think of three figures, we refer to as kings, who come from various nations throughout the world, arriving on camelback, and who followed a miraculous star leading them through the desert. In fact, none of those details come from the Gospel, but accrued to the story through the years.

Fr. Dwight Longenecker has been researching the Magi for years and has written a book to get to the bottom of the real identity of the wise men, Mystery of the Magi: The Quest to Identify the Three Wise Men (Regnery, 2017). He asserts that the Gospel of Matthew gives us enough historical clues to discover what really happened surrounding the birth of Jesus. When these clues meet Longenecker’s meticulous research into the political, religious, and cultural setting of time, a compelling case for the identity of wise men emerges.

The story of the wise men quickly took on mythical additions in the ancient world, especially in Gnostic circles. A backstory and names were given to them, along with many other embellishments on the nature of the star and their mission. For instance, it came to be accepted that there were three figures (though the Gospel mentions only three gifts) of various ages (representing the different time periods of humanity) and from different parts of the world. Overtime we’ve accepted many of these later additions as part of the Christmas story.

If we move beyond myth, most people would argue that the wise men are from Persia, as the name Magi comes from the Persian priests, scholars, and magicians (yes, this word comes from Magi) of that region. Longenecker, however, makes a strong case for why the Magi did not likely come from Persia. First, by the time of Christ’s birth, the Magi had long lost favor in Persia and actually had scattered throughout the Middle East. Also, the Parthian Empire, which ruled Persia, was early into a tenuous peace with Rome, requiring them to remain on the other side of the Euphrates River. The Magi of Persia also had less exposure to and hope for a Jewish Messiah (though some contact did occur long before in the Babylonian Exile).

If not Persia, then where did the Magi come from? Converging evidence pointed Longenecker to the kingdom of Nabateans. Although you may have never heard of the Nabateans, you may know of their rock-carved capital, Petra, a major tourist destination (and site of the last scene of “Indiana Jones and the Last Crusade”). Their culture, location, and heritage was much closer to the Israel and many Jews took refuge there during the Exile, spreading prophecies of a coming Messiah. They were Bedouins with a very eclectic culture, influenced by the Babylonian, Jewish, and Greco-Roman cultures. They also studied the stars and dominated the trade of frankincense and myrrh. The Nabatean king, Aretas IV, also had reason to send emissaries with gifts to King Herod (who himself was half-Nabatean), as Herod had just helped him to solidify his kingship with Caesar Augustus.

As I mentioned, the Gospel does not describe the star as guiding the wise men (whatever their number) on their journey, which would only have been a few days from Petra. Rather, they told Herod that they saw the star of the new king rise and Jewish scholars then pointed them to Bethlehem. It is not likely that the star made a dramatic appearance as the news surprised Herod Rather, it took study, probably astrological in nature, to decipher the star’s meaning. Longenecker goes through many possibilities, but recent scholarship points to a convergence of planets in conjunction within a constellation (especially Aires, which the Greeks associated with Judah). When the wise men saw the star stop over Bethlehem, it seems to indicate the retrograde movement of a planet.

Christmas has become trivialized in many ways. Fr. Longenecker points out that many people are just as willing to dismiss the wise men as they are Santa Claus and his reindeer. A recent Pew survey relayed that “there has been a noticeable decline in the percentage of U.S. adults who say they believe that biblical elements of the Christmas story – that Jesus was born to a virgin, for example – reflect historical events that actually occurred.” By researching the historical plausibility of the account and by making sense of the Gospel clues, Longenecker defends the reliability of the Gospel and the truth of the Christmas story. “Christianity is rooted in the facts of history,” he says, “not in fanciful fiction, superstition, secret knowledge, and bizarre cosmic theories” (30). Uncovering the identity of the wise men constitutes one step toward recovering the reality of Christmas.