His Church. Our Experience.
Subscribe
HomeLocalWho is Jesus Christ?
Local

Who is Jesus Christ? 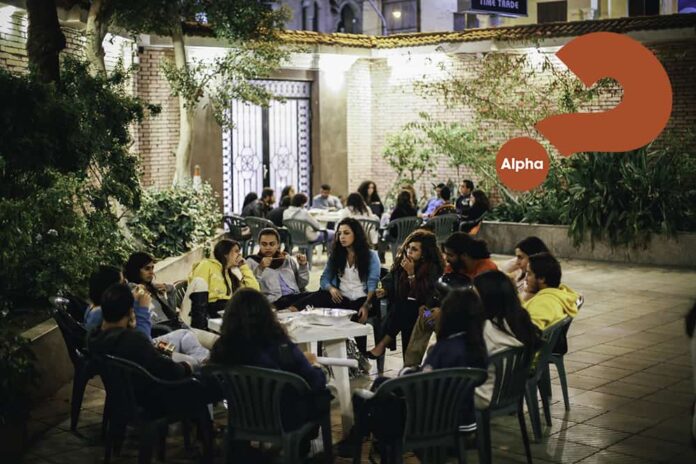 As Catholics, it’s so easy to get caught up in the doctrine and dogma and theology of the Church that we often forget the fundamental question of Christianity: Who is Jesus Christ?

Alpha seeks to remedy this. The easiest way to describe Alpha would be to call it an evangelization tool, but as its proponents will say, it’s much more than that. Aimed primarily at people who have no experience with Christianity or the Church, Alpha is an introduction to the Kerygma, a Greek word meaning “teaching” and used to describe the proclamation of the good news of Jesus Christ, upon which the Christian faith and all of its tenets are founded.denv

Originally started in the Anglican church, Alpha is designed to be used across all Christian denominations. The program is currently used in several parishes in the Archdiocese of Denver, including St. Joseph’s Parish in Golden, Immaculate Heart of Mary Parish in Northglenn, St. Vincent de Paul Parish in Denver and Our Lady of Lourdes Parish in Denver. The program is endorsed by the Office of Evangelization and Family Life Ministries as one of three programs for parishes to utilize for evangelization efforts.

Alpha serves as a great starting point for those exploring the Church and many parishes have opted to use it as a supplement to RCIA, which assumes that a person has already taken the first step toward being a Christian—namely, entering and actively pursuing a personal relationship with Jesus Christ. While RCIA is intended more as a means of catechesis, Alpha is a simple introduction to the Christian faith that can spark deeper conversion, said Scott Elmer, director of evangelization and family life ministries. However, he noted that the two should not be dependent on one another.

“[Alpha] could help people to make a decision to give themselves to Christ and enter into RCIA, but it shouldn’t be bound by that,” he said.

St. Joseph’s Parish in Golden is currently conducting its second session of Alpha. Andrew McGown, director of faith formation for the parish, implemented the program last year, and some people enjoyed it so much the first time that they’re going through it again.

“It’s a safe place to come and really informally get a taste of Christianity and build relationships, which are really at the heart of Alpha,” McGown told Denver Catholic.

A typical Alpha night starts off with a free meal, followed by a talk, done either live or in the form of a video, and is capped off with a small group discussion. The casual nature of the program is a big part of its allure, McGown said, and makes it easy to invite people to.

“It’s a totally different atmosphere than any other church program. The three proposition statements of Alpha are: no cost, no pressure and no follow-up,” McGown said. “It’s always free, we’re not going to pressure you into doing anything you don’t want to do, and we’re not going to track you down and guilt you into coming back. It’s safe to try.”

While the program is designed with non-Christians in mind, McGown stressed that practicing Christians should not write the program off as being too basic or below them.

“The great things about Alpha is it’s not so focused on non-Christians that that someone who is coming to Mass couldn’t benefit from it,” he said. “It’s a revisiting of the Kerygma, the most basic proclamation of the Gospel, and we all need that.”

Mid-way through the program, Alpha participants go on a day-long retreat that’s meant to be an introduction to the Holy Spirit. This experience is often very powerful for those in Alpha, and is the “crux of the whole Alpha model,” McGown said. “It’s a chance to pray and be prayed over … and really experience God in a profound and personal way.”

Brandon Young, director of communications for Immaculate Heart of Mary Parish and a Catholic convert of two years, had such an experience on this retreat when he was in Alpha. Young had always had a relationship with God throughout his life, but he had never stepped foot inside a church before entering Alpha. At the time, the program was used as Immaculate Heart of Mary’s RCIA program, and Young entered because he felt like God was calling him to “step it up.”

He couldn’t have predicted the impact Alpha would have on him.

“Still, to this day, the most intense, personal encounter [with Christ] I’ve ever had in my entire life was part of Alpha,” Young said. “When we did the retreat, I felt the Holy Spirit enter me and Jesus talk to me so clearly that I couldn’t keep it together. It was overwhelming.

“After they were done praying over me, I left and went to the sanctuary and just wept. My heart had felt something it had never felt before.”

As a convert, Young said he can be critical of some cradle Catholics who are catechized really well, “but don’t know how to have a one-on-one relationship with Christ.”

[Alpha], for the first time, just let me focus on that, without any external influences,” he said. “It’s not Christianity 101, but it’s, ‘Who is Jesus, and how can I have a loving relationship with him?’ If we’re all called to be disciples, we need to understand Jesus.”

To learn more about Alpha, visit alpha.org. A new Alpha program starts at Immaculate Heart of Mary Parish May 1.