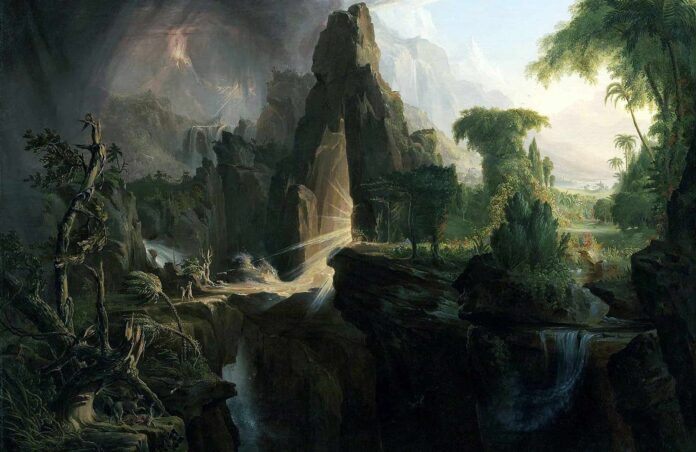 By Debbie Herbeck
Author, Speaker and Founder of the Be Love Revolution

One of my favorite things to do with my small grandchildren is to tell them a story. No matter how simplistic or fantastical the plot is, they are always delighted and enthralled. We all love stories because we are made for them.

Our individual stories unfold to us daily, yet we are also part of a larger cosmic drama marked by themes of hope and betrayal, danger and courage, love and sacrifice, battle and restoration. Tragically, the truth and beauty of the Christian story has been abandoned by our culture and replaced by a narrative that regards Christianity with doubt, ridicule, and hostility. More than ever, we need to understand the timeless truths of this Story, claim its promises, and convey it to others with clarity and conviction.

Before we can fully appreciate the Good News of freedom and restoration, we must acknowledge our condition of utter hopelessness without our Savior. St. Paul describes all of us as dead in our sins — captive slaves of an evil prince, and disobedient children of wrath. (See Ephesians 2:1-3. How did this story, so full of beauty, hope, and promise take such a tragic turn?)

Christianity teaches that this Great Story has an Author who is good. In his loving desire to share his goodness, God created realities other than himself. He gave the angels intelligent minds and free wills to serve him in heaven and minister to his people. He created the material world to express his power and beauty. Finally, the Creator’s pièce de résistance, made in his very image were Adam and Eve. He gifted them with immortal souls, reason, and free will.1 Their role was to tend the garden of the material world — not merely to live happily in Paradise, but to share in God’s divine life.

It doesn’t take exceptional powers of observation to see that God’s original intention for his creation has taken a dreadful turn. A world intended to reflect his beauty, love, and goodness is filled with pain, violence, betrayal, and loss. In this past year alone, escalating disease, addiction, economic hardship, social unrest, suicide, and crippling fear confirm what we all know deep down. Something has gone terribly wrong and we can’t fix it. Science, technology, politics, wealth, and influence cannot rectify our deep-rooted human disorder. If we are honest, we know our problems aren’t just the result of flawed systems. We are self-centered and often filled with fear, suspicion, shame, and envy; we fail most when it comes to love. We have all sinned and fall short of the glory of God.2 We are captives, casualties of a war that began in heaven long before time began.

C.S. Lewis aptly described our world as “enemy-occupied territory.”3 This enemy, called the Devil or Satan, is not a symbolic metaphor for evil or a made-up character. The villain of our story is real and his strategy is to enslave and destroy us. Scripture tells us that Lucifer was a glorious angel. Faced with the choice to embrace his created nature and play a role in the story, or to declare independence from his creator and become the center of his own story, Lucifer chose to rule rather than to serve. Filled with pride and envious of his maker and the exalted destiny of humanity, Lucifer led his legions of angels in a war against Michael the Archangel and the loyal angelic army. Defeated and banished from the divine presence, the devil “was hurled to the earth, and his angels with him”4 and he “went off to make war against . . . those who obey God’s commandments and hold to the testimony of Jesus.”5 Satan turned his attention, and the full force of his malice and rage upon the crown of God’s creation. Lurking in the Garden, he waited for his revenge through the temptation of Adam and Eve.

“The Lord God commanded the man, saying, ‘You may freely eat of every tree of the garden; but of the tree of the knowledge of good and evil you shall not eat, for in the day that you eat of it you shall die.’”6

God gave our first parents free will because he knew that real love cannot be forced or commanded; it must be freely chosen. The prohibition of the one tree was intended to test their hearts, not to withhold good from them. Would they trust their Father’s good intentions toward them and embrace the life he offered, or would they listen to the Father of Lies?7 Satan assured Eve that she would not die if she ate the fruit, but in fact the opposite would happen: she would become like God!8 This clever liar insinuated that God was jealous of her and was keeping her from her true fulfillment. Her own happiness could only be ensured by seizing it for herself. As Eve and then Adam grasped the forbidden fruit, they chose to believe a fundamental lie that they would pass on to their descendants.

The Devil could not force Adam and Eve into rebellion and servitude, but once they made their fateful choice, they were not free to avoid the consequences. Like a deadly virus, sin and death entered the world and the God-given glory of humanity began to fade. Worse than physical death was the rupture in their relationship with God. In shame, they run away to hide from their creator, and Satan completes the trap he has set through a cycle of lies, accusations, strife, division, temptation and discouragement. The whole history of humanity, including you and I, is now marked by alienation and darkness, an unfulfilled longing for communion, and the desperate striving for happiness apart from God. This is the biblical vision of our condition: We are living under a curse we can’t change and a spell we can’t break. Paradise has been lost, captives taken, and there is no way out. But wait…doesn’t every great story have a rescue?