What makes the SEEK Conference so powerful for anyone who attends? 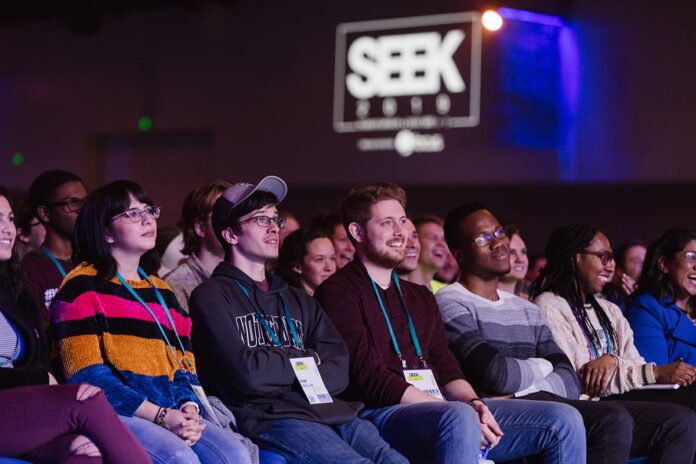 With banners, flags, music and chants, the mass of college students from all over the country stormed into the convention venue that kicked off the SEEK2019: Encounter Something More Conference hosted by the Fellowship of Catholic University Students (FOCUS) in Indianapolis, Jan. 3 – 7.

The palpable joy present among the nearly 17,000 participants caught the attention of more than just a few first partakers of the event.

Indeed, it left many wondering why so many college students wanted to spend the remainder of their winter break at a Catholic conference, and what had happened there that made such a big buzz all over.

While many of the key elements that contribute to the great success of a conference like SEEK often remain hidden, – such as the tireless work of those in logistics – there are more visible aspects that, in harmony with everything else, accomplish the ultimate goal: that people encounter Jesus Christ and become his disciples.

Based on testimonies of participants, here are some of the greatest elements that impacted them about the conference.

Father Jim Crisman, who, as pastor at St. Peter’s Parish in Greeley, works with FOCUS missionaries at the University of Northern Colorado through the Bear Catholic program, linked the big impact FOCUS has had, and what it offers through SEEK, to the longing for God already present in the students.

“[FOCUS has had such a great impact] precisely because there’s a hunger in the world… So, when someone who is hungry and desires to know the truth and live the truth receives an invitation, [they see that] now they have an opportunity to do so through the mission activities of FOCUS, [including SEEK],” he assured.

Experience of the Church

But, how does SEEK help people encounter God, and know and live the truth?

A contributing aspect common to many testimonies of the conference is a renewed experience of the living Church.

“The very fact that there were students as well as seminaries, as well as priests, as well as life-long missionaries, and all of us together in these talks and praying together, and spending time together was a really cool vision of the Church alive in a very powerful way,” Father Crisman said.

“When on the first day I saw all the priests process in for Mass and that many young people who chose to spend part of their Christmas break to grow in relationship with Christ, I was taken back,” Luke Metzer, a student from the Colorado School of Mines, also recounted.

For Janet Driscoll and her husband, long-time parishioners of St. Thomas Aquinas Parish in Boulder, this aspect took on a different form. Despite it being their first time attending SEEK, they have been sponsoring FOCUS missionaries for about 20 years, and were delighted to witness the exponential growth of the organization, and the joy on so many young faces.

Their daughter Lisa Driscoll, FOCUS missionary and team director at MIT, also shared about the importance of the experience of community.

“We are made for relationship, and you see that in a very wide scale at SEEK. The Devil wants us to think that we are alone… [But] when a person from any state of life is able to see just a portion of the universal Church, that solidarity and that unity is something that we can’t experience on a daily basis, and it provides great hope and encouragement,” she said.

The variety of topics offered to the participants of the SEEK conference — ranging from relationships to atheism — and the diversity of talented speakers — including Father Mike Schmitz, Scott Hahn and Sister Bethany Madonna — were also contributing factors to the outcome of the event.

“Every talk I went to, I was just blown away. The gifts that those people they chose as speakers and keynotes have are truly amazing. I can’t commend FOCUS enough for putting on a conference like that. I think it’s hard to go to SEEK and not be changed about the way you think about your life and how you arrange your priorities,” Metzer shared. “The speakers were just phenomenal, and I can’t thank them enough. They’ll never know how much they’ve done for me and other people like me.”

Janet believes that the topics chosen were essential because they touched on fundamental topics of the human person.

“Many of the speakers talked about the big questions, because that’s what FOCUS is about — trying to help all of us, not just students, ask: Who is God? What does he mean in my life? What is my purpose? What is God’s purpose for me?” she said. “The speakers talked about mission in a way that made me think about my own mission… The FOCUS mission is to evangelize and form all of us at any age.”

Jesus in the sacraments

Finally, many students were able to encounter Jesus during SEEK through confession, Eucharistic adoration and the Mass. In fact, more than 400 priests concelebrated Mass and heard more than 6,500 confessions.

Janet recalled partaking of the night of Eucharistic adoration with some 17,000 students.

Lisa highlighted her father’s experience, who, after coming out of confession, saw Jesus in the monstrance in front of him and was “overcome by emotion.”

“It was a beautiful moment of embrace for all of us to share in the goodness of God and his mercy, in our family and in our own intentions in our family,” she said.

The MIT missionary also shared the story of a student from her group who was able to experience God through the beautiful music of polyphony during Mass, and after the conference disclosed that she wanted to become Catholic.

Amid the numerous hearts that were touched at the conference, the common theme of becoming missionary disciples resounded through SEEK2019. This insistence is perhaps one of the main contributors to the great impact of the conference, as is witnessed by the continual growth of the number of SEEK attendees and missionaries.

Archbishop of Denver Samuel J. Aquila, who took a break from the U.S. bishops’ retreat to celebrate the Sunday, Jan. 6 Mass at the conference, encouraged the participants to be witnesses of Christ after encountering him.

“Once we have encountered Jesus… who is the light, we are to become the light of the world… And my sons and daughters, you are the light of the world today in history,” he said. “You are sent on mission, in whatever walk of life you are in, to bring Christ to others. All of us are given that commission. We cannot let that light be hidden but rather we must let that light shine.”

Beyond the many reasons that contribute to the powerful impact of the SEEK conference, one thing is for certain: The model of missionary discipleship works; and, as Father Crisman put it, “It’s the model that Jesus set up — we’re simply following it.”