We should have listened to Pope Paul VI 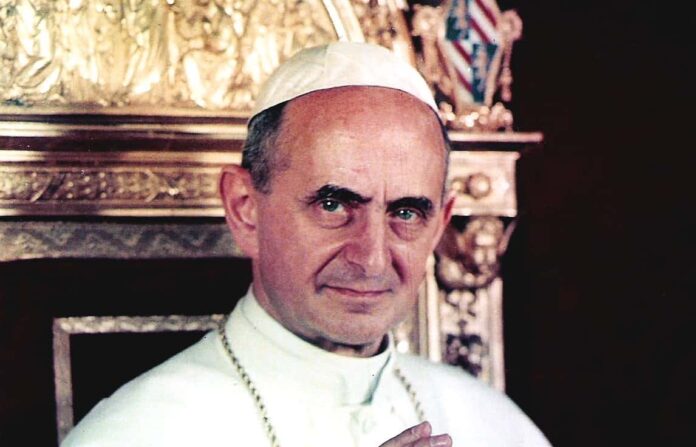 I don’t know about you, but for me it’s been a whirlwind.  Parties, parades, some great fireworks shows.  Oh, and did you see the Hollywood All-Star Tribute to Pope Paul VI?

OK, maybe not so much.

It’s a shame, really. If everyone had somehow, miraculously, listened to Pope Paul VI back in 1968, the world could be a very different place today.  Heck, we might not even have a need for the #MeToo movement.

Allow me to explain.

Up until the 1960’s, it was pretty universally recognized that sex between people of childbearing age came with the distinct possibility of the aforementioned childbearing.  Birth control methods up to that point were somewhat rudimentary and unreliable.  Procreation was an inherent part of sexual activity — part of its meaning.  So respecting a woman meant not putting her at risk of a pregnancy she wasn’t prepared for.  And she in turn had a clear-cut, universally recognized reason to be indignant if a man was pressuring her.

But The Pill changed all of that.  Young people (and a lot of older people, too) figured that, without that pesky fear of pregnancy, they could indulge in sexual activity whenever, and with whomever, they chose. It would be fun, they thought.  Sex feels good, they thought.  Why not have more of it, with more people, they thought.

And then Pope Paul VI said “no.”  In Humanae Vitae, he essentially said that Pill or no Pill, birth control was still not morally licit.

The young people of the Free Love Generation were not disappointed by this news — only because I would imagine they were too busy making love and not war to notice an obscure, 23-page theological document released by a celibate guy who was way older than 30.

But, had they been smart, they might have paid attention to the following passage from that obscure theological document:

It can also be feared that the man who becomes used to contraceptive practices, may finally lose respect for the woman, and no longer caring about her physical and psychological equilibrium, come to the point of considering her as a mere instrument of selfish enjoyment, and no longer as his respected and beloved companion. (HV 17)

Does that sound at all familiar?

The problem came because, as much as the generation of the 1960’s wanted Free Love to really be free, it isn’t.  They figured removing the risk of pregnancy would remove the “strings,” and everybody could just consensually enjoy everybody else’s body with no ramifications.

But there is a saying: “Nature bats last.”  Sexual activity was designed by God, not by us.  And he, in myriad ways, designed it to be a profoundly, deeply, inherently meaningful act that touches the very core of the human psyche and spirit.  Everything about it — physically, chemically, emotionally and spiritually — is built around the fact that it is a profound act of self-giving love that places the couple in the context of entering into and cooperating with him in his most sacred role — as Creator of the miracle that is a new human person. Sex speaks a language, and the possibility of procreation is an essential part of that language.  It says “I give myself to you, and to the new life that may come forth from my gift.”

And as hard as we might try, we can’t change that.

I think women, being the ones who conceive and bear that life, are more naturally sensitive to this meaning.  We can’t always articulate it, but it’s there. And hence, we are more reluctant to play with it carelessly.

When the sexual revolution attempted to sever sexual activity from the possibility of procreation, they were essentially attempting to render sexual activity meaningless.  They were saying “from now on, this is just something we do with our bodies.  It can mean as much or as little as you want it to mean.”

This is wrong on so many levels.  For one, it takes away women’s power.  When we recognized that sex is powerful, meaningful and life-altering, a woman had the backing of her family and her culture in saying “No, I will not place myself or my future children at that risk, and if you don’t respect that, you clearly don’t love me.”

Now, women are more or less on their own in fending off the male sex drive — which, for good or for evil, could probably be considered one of the most powerful forces in the world.  If sex is meaningless, then why in the world would she object?  He wants it, and it might be fun for her too, so why wouldn’t she be nice and acquiesce?

It takes a very strong, very well-formed and dare I say holy young woman to have the courage to say “I believe that God created sex with an inherent meaning, so my final answer is no” and watch him walk out of her life forever.  For the vast majority of young women, who can’t articulate what they inherently sense about the sacredness of their bodies, it’s a lot easier just to go along with the program and try to keep the guy.

And then it moves from acquiescing to keep the boyfriend, to acquiescing to make the powerful man happy so that I can get the job, or keep the job, or get the role in the movie, or whatever.  The world becomes one big quid pro quo arrangement whereby we are expected to trade on our bodies to get what we want or need.

And the woman becomes “a mere instrument of selfish enjoyment.”

The hard lesson we should have learned from Humanae Vitae is quite simply that our bodies have meaning, that sexual expression has a meaning, and that God is God and we are not.  And that when we start tinkering around with that meaning, people get hurt.

We should have listened.