His Church. Our Experience.
Subscribe
HomeLocal‘We can all be #MaryStrong’: Family finds outpouring of support in Catholic...
LocalSchool News

‘We can all be #MaryStrong’: Family finds outpouring of support in Catholic community after rare cancer diagnosis 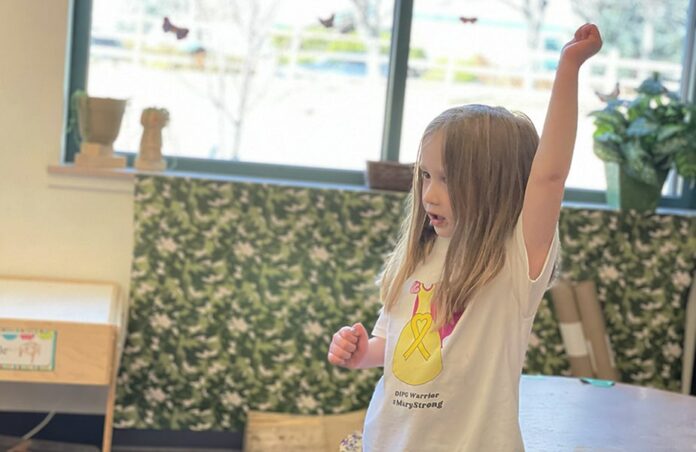 Mary Stegmueller is a bright, joyful and outgoing preschooler at Frassati Catholic Academy. As she dances with her classmates and enjoys her Trix cereal during snack time, it seems like just another normal day at school.

But March 10 was a special day at Frassati – it was #MaryStrong Day. Students and teachers wore white t-shirts adorned with a yellow princess dress with a pink cape and the words “DIPG Warrior, #MaryStrong” printed across it. The entire school community showed their support for Mary because it was going to be Mary’s last day at school for a little while. The next day, she would leave with her parents and little brother Robbie to California for the second part of a trial cancer treatment at Stanford University, called Chimeric Antigen Therapy, or CAR-T Cell Therapy, to get rid of the tumor on Mary’s brain stem and spine.

Mary was diagnosed with Diffuse Intrinsic Pontine Giloma (DIPG) in October of last year. Only 300 kids are diagnosed with this extremely rare cancer per year, and there is no cure. The typical prognosis for DIPG patients is very short – as short as four weeks after their diagnosis. Yet, Mary is still her active self, and despite the challenges she faces, her joy and strength are contagious.

“She does not look like a sick kid, but she’s very sick,” Kristin, Mary’s mom, said. “Most DIPG kids aren’t running, but she’s been able to do it miraculously. She’s so strong and so outgoing. Most kids with DIPG get to the point where they can’t walk; she’s doing yoga and loves to do it and loves to be active.

“She’s going to be a miracle, and she believes it, too.”

Mary’s symptoms started showing over two years ago, though her parents didn’t know it at the time.

“A little over two years ago, Mary spiked a fever from chronic ear infections and her eyes crossed,” Kristin explained. “She had surgery a few months later for her ears. [They said] that a while after that [her eyes] might uncross, so let’s wait. They didn’t uncross. They told us to go to an eye doctor. So we went to the eye doctor, and they prescribed her glasses to try to fix it. They didn’t work. So her pediatrician said [to] go see Kaiser’s eye specialist for kids. She ordered an MRI just to see if there was any nerve issues.

“As Mary’s in the MRI machine, we get a call saying [they] found something,” Kristin continued. “[They did] a longer MRI, and then I get a call from an oncology doctor at Children’s [Hospital] that pretty much said, ‘there’s a mass, come straight here when she wakes up.’”

Over the last six months, Mary has endured more invasive medical procedures than most people endure over the course of their entire lives. However, while the diagnosis is tough to accept, she’s receiving the most cutting-edge treatment available. The CAR-T cell study at Stanford which Mary is undergoing is a brand new but promising medical trial; she’s the seventh person in the entire country to undergo it.

After she arrived in California, Mary had three more days of chemotherapy and then doctors infused the CAR-T cells they extracted from the first part of the trial into Mary. She and her family will stay out there for 28 days after the cells are infused for close observation.

“We’ll know they’re working when she spikes a fever and has brain swelling and ends up in the ICU,” Kristin said.

Finding strength in faith and community

Every parent’s worst nightmare is to see their child suffer from a terrible disease like cancer. Emotions have been all over the place for Kristin and Bobby throughout Mary’s journey (“Lots of crying,” Kristin says). In addition to the immense emotional toll it takes, cancer diagnoses often come with lots of unexpected medical expenses. A GoFundMe page was launched for the family by Mary’s uncle, and it has raised over $23,000 so far.

The eighth-grade class at Frassati also launched a “Snowflakes for Mary” campaign in February to raise money for the family, and on #MaryStrong Day, a group of students presented them with a check for nearly $4,000. Teachers at Frassati shared that donations from students came in regularly through February, with some students insisting on giving money out of their own piggy banks. In addition, prayers continue to be regularly offered by the school community. The school handed out prayer cards with a picture of Mary on them.

The Stegmueller family has been completely humbled by the school’s support.

“Frassati is amazing. [It] is a whole other level of school that I’ve never, ever really seen,” Kristin said. “People we’ve never, ever met send us messages just wanting to show support and [others] walk Mary to the car after school. Everybody knows her, and she’s this little four-year-old! It’s a family. [Mary] loves her school. She gets sad when she has to miss school.”

The family are also parishioners of St. Scholastica Parish in Erie, where Kristin serves as the business manager. The parish community has been supporting the Stegmueller family by bringing them meals and helping out with things like housesitting while they’re out of town for Mary’s treatments. For Father Robert Wedow, pastor of St. Scholastica, he said that while it’s been difficult to watch the Stegmueller family go through this, he has been amazed by their faith.

“All we have is Jesus, Mary, the Saints, the angels, all the heavenly angels, and all the hopes and promises that Jesus has given us,” Father Wedow said. “God the Father, the Holy Spirit… They’re all on our side. So in every difficulty, we can’t lose sight of whose team we’re on. Kristin and Bobby and Robbie and Mary have all been great examples of faith, hope and love.”

Through the tears of a pastor, Father Wedow also said that a priest in California was able to come and bless the CAR-T Cells from Mary’s blood before they were infused back into her. After she was diagnosed, because of the uncertainty of the prognosis, Mary received the Anointing of the Sick from Father Wedow and she also received the Sacrament of Confirmation and made her First Communion.

Father Wedow said he’d be grateful if others would offer up a Glory Be, Our Father and Hail Mary for her healing and recovery.

‘We can all be #MaryStrong’

Besides their own families and the communities of “extended family” that are helping to hold them together, another big source of hope for Kristin and Bobby is Mary herself.

“She’s actually been the one getting us through it because she’s so strong,” Kristin said. “She’s so excited to go get what she calls her ‘super blood.’ She’s just got this resilience and she’s like, ‘I’m fine. I’m going to do this.’ That’s what kind of gets us through.”

Of course, their faith has also played an important role in sustaining them through the challenges of Mary’s diagnosis.

“Honestly, if we didn’t have our faith and the support of everybody praying for us, I don’t think we’d be getting through this at all very well,” Kristin shared. “It’s been huge for [Mary] as well to have that. She [says], ‘God’s going to take care of me.’”

Through it all, Kristin and Bobby remain grateful for all of the support they’ve received from their faith community and beyond. It’s in that support and in the resilience of Mary that they’re finding the strength to be #MaryStrong amidst a trying time.

“We’re just so incredibly thankful for everybody, from prayers to people dropping off something just to brighten Mary’s day,” Bobby concluded. “It’s just been amazing to know that you’re not alone. It’s easy to feel alone and just not know what tomorrow is going to bring. We can all be #MaryStrong. If I can be as brave and strong as she is, that’s a good day.”