Waugh’s Helena, Father General, and the reality of revelation 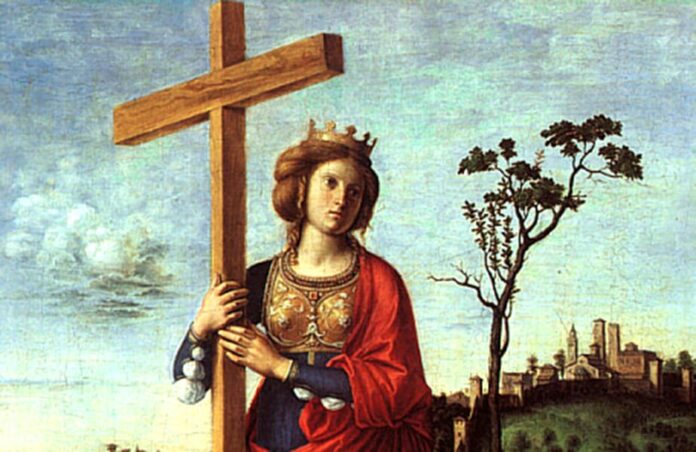 Evelyn Waugh’s slim and critically unappreciated novel, Helena, was something of a literary experiment for a modern master of English literature. The eponymous heroine, mother of the Emperor Constantine, talks in her youth like a flapper from the Roaring Twenties; the storytelling is spare, absent the lush prose of Brideshead Revisited; Waugh’s preference for “the picturesque [over] the plausible” in historically questionable matters is enough to offend a squadron of academics. At bottom, though, the novel, the only one of his books Waugh ever read aloud to his children, is an act of faith in the reality of revelation.

Which makes it an especially appropriate read during Lent-2017.

Helena, whom Waugh first portrays as the horseback-riding, tomboy daughter of the British King Coel (that “merry old soul”), marries a rising young Roman legionary, Constantius, and with him has a son, Constantine. For political reasons, Constantius trades in Helena for a trophy wife, and while he climbs the greasy pole of Roman military politics, she retires to the rural quiet of the empire’s periphery and eventually becomes a Christian. Reunited with her son after he establishes himself as Number One in Rome and begins to lay plans for a new capital, Constantinople, Helena discovers that post-persecution Christianity in Rome is embroiled in theological controversy, with various forms of Gnosticism threatening to reduce the faith to an arcane “knowledge” (the Greek “gnosis”) accessible only to the elite.

So the elderly Helena, a practical British girl and something of a populist despite her status as Dowager Empress, decides to put paid to that nonsense by going to Jerusalem on pilgrimage and recovering the instruments of the passion: the physical evidence that Christianity, rather than being an esoteric myth, is founded on real events that happened to real people at a real time in a real place – events that so changed those people and those they taught that the Christian movement converted a considerable part of the Mediterranean world before Constantine (always on the lookout for the main chance) joined the winning side. Helena’s quest, which has its climax during Lent, is rewarded by the discovery of the True Cross.

Helena is full of Waugh’s humor – including a hilarious putdown of Edward Gibbon and the anti-Christian motif in his Rise and Fall of the Roman Empire – which makes for easy and amusing reading. The author’s intent, however, was entirely serious. He knew that Gnosticism was a protean heresy that re-occurred across the centuries. And as a convert (like his heroine), Evelyn Waugh chose the best tools at his disposal, his well-honed abilities as a wordsmith, to take a standagainst the modernist tendency to reduce revelation to myth – and to make ourselves the judges of revelation, rather than being judged by it.

Shortly before Lent-2017, the newly-elected General of the Society of Jesus, Father Arturo Sosa, SJ, gave an interview in which he was asked about Cardinal Gerhard Mueller’s recent statement that “no power,” including popes, councils, and bishops, could change the words of Jesus on marriage and divorce. Father Sosa brushed that off by saying that “no one had a [tape] recorder,” so that it’s up to us to put Christ’s words in the appropriate context, presumably drawn from contemporary experience. Father Sosa insisted that this was not “relativism;” be that as it may, it certainly is Gnosticism, of a distinctly modern form.

In its Dogmatic Constitution on Divine Revelation, the fathers of Vatican II wrote that Scripture, and the continuous Tradition which lives from it, “are like a mirror, in which the Church, during its pilgrim journey here on earth, contemplates God, from whom she receives everything…”  A few paragraphs later, the Council fathers affirm that the authors of Scripture “consigned to writing whatever [God] wanted written, and no more.” So, no, no one had a tape recorder; the gospel writers had something better – the assistance of the Holy Spirit in preparing texts that included “whatever [God] wanted written, and no more.”

It has been clear for over two years that the marriage/divorce/holy communion controversy pits those who, with Vatican II, affirm the reality of revelation against those who insist that experience and history judge revelation. We can be grateful to Father Sosa for underscoring this point in an unmistakable way.

Educating for what matters most