In celebration of the 105th World Day of Migrants and Refugees, the Archdiocese of Denver will join Pope Francis and our brothers and sisters from around the world in this international celebration, hosting a special holy mass. The intent of this mass is to express concern, increase awareness, and pray for the many different vulnerable people on the move, making sure no one remains excluded from society.

The celebration will take place Sept. 29 at the Queen of Vietnamese Martyrs Catholic Parish at 3 p.m. with a Holy Mass celebrated by Auxiliary Bishop Jorge Rodriguez. The bilingual Mass will incorporate elements from various Catholic Cultures around the world. Mass will be followed by a festival with cultural dances, music, and food. Click here to view the official Facebook event page.

The Catholic Church has been celebrating the World Day of Migrants and Refugees since 1914, the first being held shortly before the outbreak of WWI. This year, with the theme “It is not just about migrants,” the Pope tells us that this celebration is not limited to migrants and refugees, it is about all of us, humanity, and our common desire to build a better world.

“It’s an opportunity to pray for our brothers and sisters that are going through this situation, migrants and refugees, and to raise awareness of the problem, said Bishop Jorge Rodriguez, who will be celebrating the Mass “We are a migrant community, Hispanics, Africans, Asians, and we want to pray for this reality, we want to ask the Lord for his blessing in this situation we’re living and pray for the United States that is our host country. We all want to join the holy father on September 29.”

Bishop Rodriguez also took the opportunity to invite everyone to this Eucharistic celebration, emphasizing the importance of praying together as one community.

“The invitation is for everyone. We will have the participation of the Hispanic, African, Vietnamese, the Pakistan-Catholic, Burmese communities, etc. and also the American community that must and will be present,” he said.

As far as the political side of the migrants and refugee issue, Bishop Rodriguez made it clear that this celebration is about the human side of the problem and coming together as one.

“For us Catholics, when we talk about migration, migrants, or refugees, we are not talking about the sociological phenomenal of politics. For us, and this is the theme for this year’s celebration, ‘it’s not only about migrants’ it’s about our fears, not only about migrants it’s also about humanity and charity,” the bishop explained. “I know there is a political side of the issue, but our perspective is the Christian and the human side. People migrate because of different circumstances looking for a better future for them and their children, or they’re fleeing war, we see it all over the world, not just in the United States, and we want to be aware of it, pray for it, and approach it as humans, as Christians.”

On May 5, the Colorado Capuchins quietly marked their 50th anniversary of serving in Colorado.

What was intended as a jubilant celebration with Masses from both of Denver’s bishops did not happen due to the COVID-19 pandemic and the postponement of public Masses. However, the friars of the Capuchin Province of St. Conrad celebrated by doing what they do best: humbly serving the people of Colorado.

In the spirit of the present circumstances, however, they also began reaching out to people in a socially-distant way. They began livestreaming a Mass from the St. Francis of Assisi Friary for the faithful to tune into and are creating a series of videos on their rich 50-year history here in Colorado. Additionally, the friars have been posting daily videos of encouragement on their YouTube channel (youtube.com/user/CapuchinFranciscans). The Masses can also be viewed there.

In a blog post published on the Capuchins’ website July 12, Brother Mark Schenk, O.F.M Cap., Provincial Vicar of the St. Conrad Province in Denver, wrote about the mission of the Capuchin Franciscans in Denver over the past 50 years.

“This year our province joyfully commemorates 50 years of Capuchin presence in Colorado,” Brother Schenk wrote. “Pope Pius XI once said of the Capuchins, ‘When help was sorely needed, in places that were abandoned and where no one else would go, there you will find the Capuchins.’

“Over the past 50 years, we have striven to be faithful to that identity, bearing the joy of the Gospel to the marginalized and forgotten. It was need that brought us westward and it was need that inspired our multitude of ministries to the poor, lost, sick, dying and imprisoned of Colorado.” 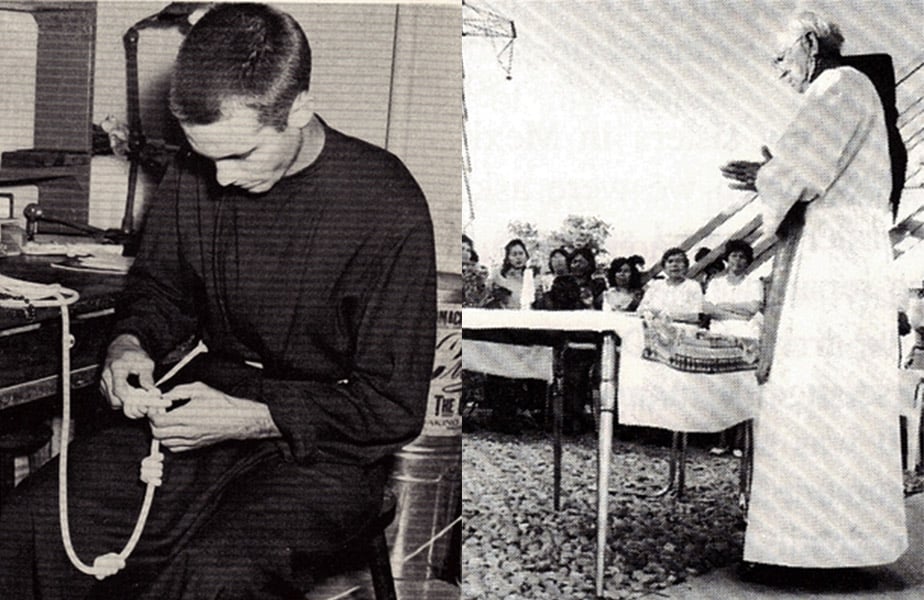 The Capuchins came out west to Kansas in 1878 in response to a request from Bishop Louis Mary Fink of Leavenworth to care for the numerous German-speaking immigrants from Russia’s Volga River who were settling in the area around Hays. In 1970, following the Capuchin charism of going where they are needed, they expanded their ministry to Colorado at the request of Archbishop James Casey, who needed assistance in pulling Annunciation Parish in Denver back together.

On the morning of May 5, 1970, Father Paulinus Karlin and another friar on loan from Puerto Rico left Kansas and drove to Annunciation where a new chapter of Capuchin history began. The Capuchins remain at Annunciation Parish to this day, where they continue to embody the spirit of St. Francis of Assisi in brotherhood, poverty and fierce dedication to the parish and the people in the surrounding neighborhoods.

“Today we continue the ministry of St. Francis of Assisi, bearing the Gospel to peoples and places that are neglected and forgotten,” Brother Schenk wrote. “Whether it be in the poor parishes ministering to immigrant populations, in the hospitals and care centers where our friars kneel in prayer at deathbeds or on the city streets where we offer food and fraternal love to the downcast and destitute, we want to venture where no one else will go.” 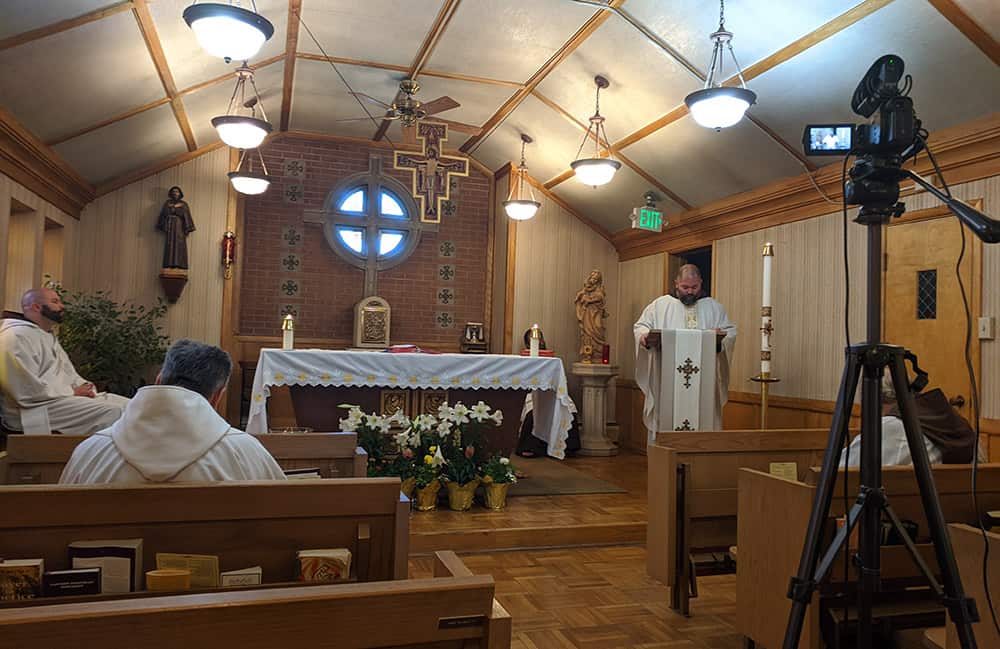 In March, the friars began livestreaming Mass from the St. Francis of Assisi Friary in Denver. Fifty years ago, Capuchin Franciscan friars made their way to Colorado to serve the people here, and they have been a vibrant piece of the faith community ever since. (Photos courtesy of the Capuchin Franciscans)

Among the many footprints the Capuchins have laid down in Colorado is the Samaritan House, which is now the largest Catholic homeless shelter in Colorado. Although they are no longer directly involved with its operation, the friars helped to plant the seeds for it through their Samaritan Shelter opened in 1982, and they maintain a constant presence there through a friar who serves as a chaplain.

One of the more innovative ways that the Friars reach out to those in need is through a food truck that the province launched in November 2018. Painted Franciscan brown with colorful artwork depicting local friars engaged in ministry as well as Saints Francis of Assisi and Padre Pio, and Blessed Solanus Casey, the truck includes white text on the back acknowledging partnership with the Routzon Family Foundation, while messaging on the sides identifies it as belonging to the Capuchins and describing their mission as “Messengers of God’s mercy” and “Brothers to those in need.” 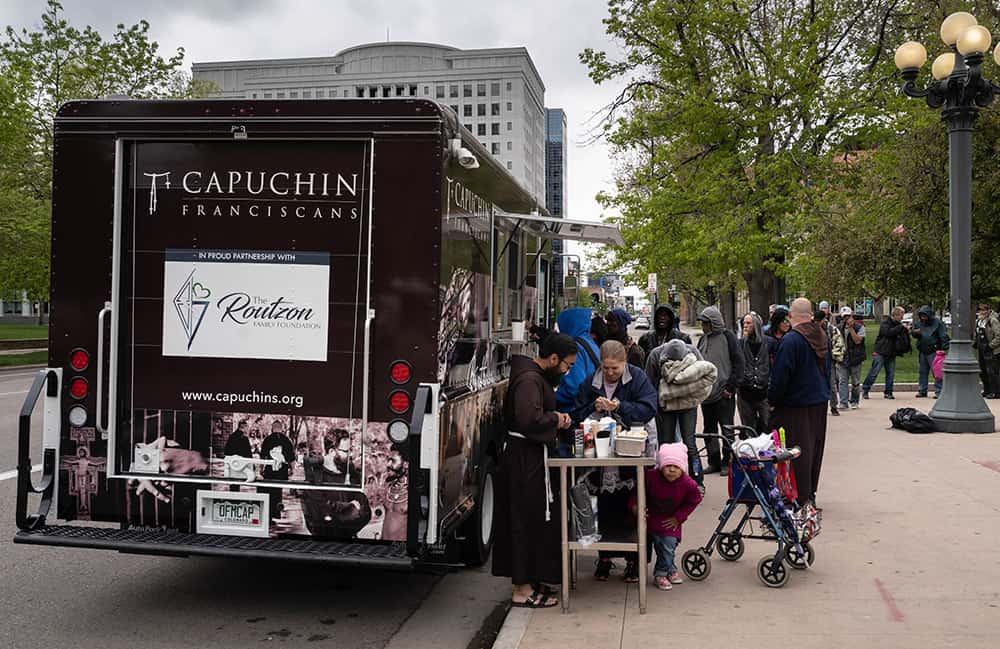 The friars opened a food truck in November 2018 as a way to help the homeless of Denver have access to free, healthy meals. Fifty years ago, Capuchin Franciscan friars made their way to Colorado to serve the people here, and they have been a vibrant piece of the faith community ever since. (Photos courtesy of the Capuchin Franciscans)

Additionally, in 2011, the friars founded the Julia Greeley guild in honor of Julia Greeley, a former slave and lay Franciscan whose cause for canonization is currently underway. If she is canonized, she would be the first saint declared from Colorado.

Today, pandemic or not, the Capuchin Franciscans of the St. Conrad Province continue to live out their charism of brotherhood and sharing the Gospel with those who need it most/

“We continue to seek out the abandoned places where aid is sorely needed,” Brother Schenk concluded, “working alongside the laity to bear the good news of the Gospel where the need is desperate and few are willing to go.”