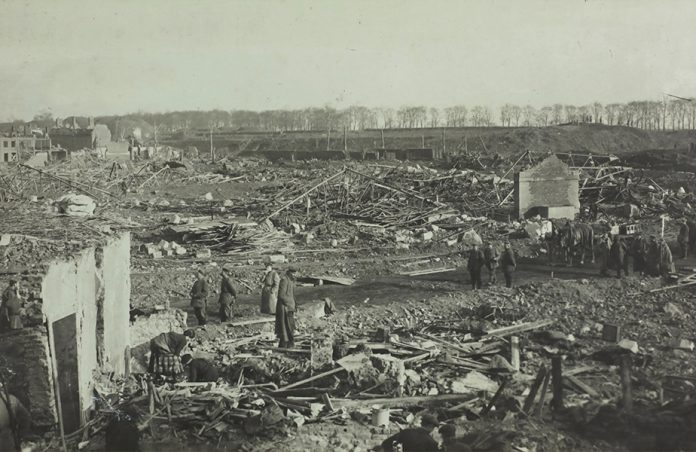 One of the more irritating tropes of this age in which sloganeering has replaced argumentation is the alleged distinction between “wars of choice” and “wars of necessity.” That distorted and distorting antinomy was first deployed on the political left, with respect to Afghanistan and Iraq. It has now migrated to the starboard side of our politics, especially among soi-disant “national conservatives,” some of whom apply it to the war in Ukraine, now entering its seventh month.

The distinction is bogus (and analytically useless, from both a moral and political point of view) because all wars involve choices: including the most basic choice, which is to go to war. Every war is a “war of choice,” including the war now dubbed the paradigmatic “war of necessity,” World War II. Don’t believe it? Try this thought-experiment (the premise of which echoes Philip Roth’s novel, The Plot Against America):

So what happens? There is no Lend-Lease Act and no surreptitious American convoying of merchant ships to Great Britain. There is no draft, and the U.S. Army is effectively dismantled. There is no American embargo on the export of oil and other raw materials to Japan, there is no reinforcement of the Philippines, and the U.S. Pacific Fleet remains based in San Diego rather than Pearl Harbor. The United States has chosen not to enter the world war then underway, imagining that American freedom can co-exist with a Nazi-dominated Europe and a Japanese-dominated Greater East Asia Co-Prosperity Sphere.

Similarly, after the defeat of France in June 1940s, Great Britain could have chosen to accept Hitler’s offer of a negotiated peace that preserved the British Empire while giving Germany a free hand in continental Europe. The majority of the parliamentary Conservative Party, then in power, might well have taken that deal, and the Duke of Windsor (like Lindbergh, a Hitler aficionado) would have been happy to return home and resume his throne.

The false disjunction of “wars of choice” and “wars of necessity” even applies to Ukraine today. Faced with Vladimir Putin’s imperial mania, Russia’s seizure of Crimea and occupation of parts of eastern Ukraine in 2014, and what was imagined by many to be the overwhelming power of Russia’s armed forces, Ukrainians could, six months ago, have chosen to cut a deal with the Russian autocrat, settling for an internationally-guaranteed rump Ukrainian state centered on the city of Lviv, while leaving the rest of the country to be absorbed into Russia. That choice was, in theory, available, and doubtless some in the West were wishing that Ukraine would take that option, thus relieving them of the moral burden of making their own choices about facing down aggression.

But the Ukrainian people did not choose to surrender their nation and its sovereignty. And by majorities over 90% they continue to scorn that choice, despite the ruin and sorrow wrought by Putin’s savage warmaking, despite the counsel of unrealistic foreign policy “realists” like John Mearsheimer, and despite American politicians cowed by the charge that “elitists” are embroiling the United States in what is not a war of “necessity,” but of “choice.”

The choice Ukrainians have made — the choice to defend their nationhood and their democracy — poses choices for the rest of the world. At 50,000 feet above reality, the options include a “dialogue” with Vladimir Putin (moderated by the Vatican, in some minds) that would, after a cease-fire, re-establish the status quo before Russia’s February 24 invasion. History strongly suggests, however, that dictators like Putin regard such pauses as merely a strategic breather before resuming their aggression and perhaps extending it (in this case, to the Baltic states).

Moreover, what would be strategic foolishness is also moral cravenness: acquiescence to the sort of evil not seen in Europe in over seven decades. Ukrainians are not asking us to fight their fight. They are asking us to provide them the materials necessary to defend their sovereignty (which the U.S. guaranteed when Ukraine freely gave up its nuclear weapons) and for humanitarian assistance. To deny either of these is to play the coward.

It is also, “national conservatives” might note, to ignore the warning of that great conservative, Edmund Burke: “When bad men combine, the good must associate; else they will fall, one by one, an unpitied sacrifice in a contemptible struggle.”