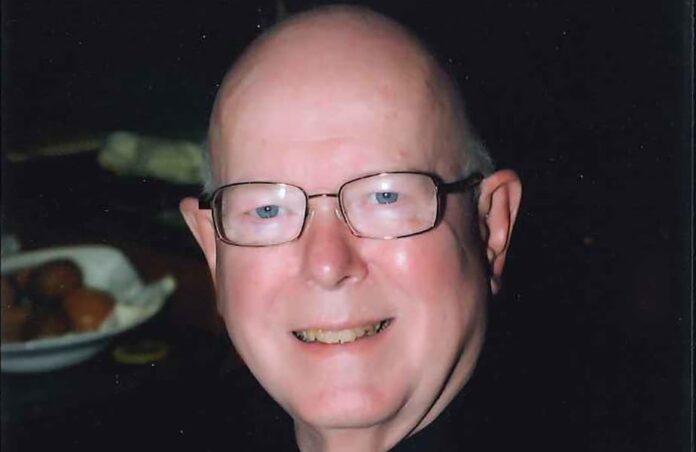 Father Lawrence P. Christensen, a Congregation of the Mission (Vincentian) priest who served the Denver Archdiocese for most of his 34-year priesthood, died Jan. 1. He was 82.

He was born in Chicago on June 11, 1935, to Helen (Kiebel) and Christian Christensen. He grew up in Chicago and graduated from DePaul Academy in 1954. He then entered St. Mary of the Barrens Seminary in Perryville, Mo., the historic seat of the Vincentian order in the United States. He professed vows on July 31, 1956, and served as a religious brother until he was ordained a deacon on June 4, 1976. After ministering in the diaconate eight years, he was ordained to the priesthood on Jan. 7, 1984.

“He was a very dedicated priest,” Deacon Tim Unger said about his longtime friend and, later, co-worker at Risen Christ Parish. “Some religious order priests come and go, but he really devoted his life to Denver. He loved it here. I think he felt this is where he was meant to be.”

Father Christensen loved to travel and had led a pilgrimage to Ireland just last year as well as took a cruise to Hawaii for the first time, Deacon Unger said.

“He could tell you anything about the British royal family, which was kind of funny,” Deacon Unger said. “And he had an avid affection for dogs. He had a dog named Charlie.”

As a religious brother and as a deacon, Father Christensen served as registrar of St. Vincent de Paul Seminary in Lemont, Ill., and as provincial secretary in St. Louis, Mo. After his ordination to the priesthood, he ministered in a Perryville parish, then served three years as vocation director for his province before coming to Denver in 1991.

In Denver, he was director of admissions at St. Thomas Seminary for four years before it closed in 1995. He then ministered as a parochial vicar in many parishes, including Christ the King in Denver and St. John the Baptist in Longmont. He did the same for 10 years at St. Elizabeth Ann Seton in Fort Collins before ministering the last eight years at Risen Christ in Denver, where he was parochial vicar seven years and administrator one year.

Father Christensen also was a longtime celebrant of the Denver Archdiocese’s TV Mass.

Last July he was sent to the Vincentian’s retirement home, Apostle of Charity Residence in Perryville, with serious health issues. He was diagnosed with amyotrophic lateral sclerosis commonly called ALS or Lou Gehrig’s disease.

“Father Larry served the (Vincentian’s western) province and the Church with energy and joy,” said Father Joseph Williams, CM, assistant provincial. “While his illness progressed rapidly, Father Larry maintained a joy of life and complete openness to the will of God. His trust and dependence on Divine Providence never faltered.”

A funeral Mass was celebrated on Jan. 4 at St. Mary of the Barrens Church. Burial was in the Vincentian Community Cemetery.

In Denver, a memorial Mass is set for 2 p.m. Friday, Jan. 19 at Risen Christ Church, followed by a reception.

Roxanne King
Roxanne King is the former editor of the Denver Catholic Register and a freelance writer in the Denver area.
RELATED ARTICLES
Events