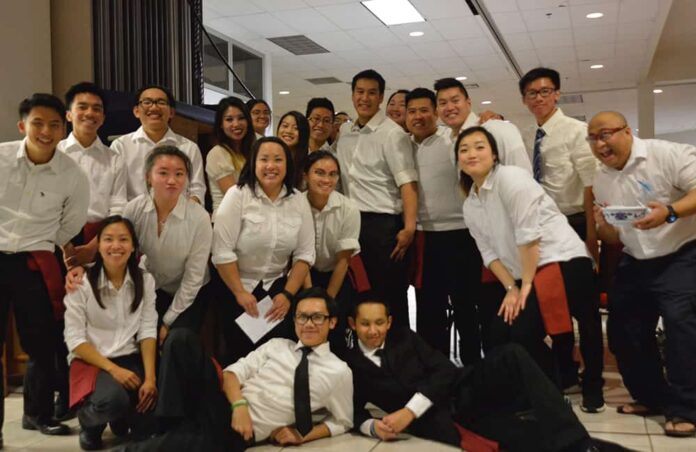 About 800 Vietnamese refugees, immigrants and their relatives gathered on Veterans Day at Queen of Vietnamese Martyrs Catholic Parish event center in Wheat Ridge, raising more than $80,000 for survivors of recent storms in Texas, Florida and central Vietnam.

“We dedicate this event to God, and to Mary,” said co-organizer Viet Hua. “We’ve been praying and asking for help, in God’s way, to glorify him in our effort to help those who suffer.”

It was an evening of food, music, dance and auction goods that sold for thousands more than market value in the spirit of exceeding an ambitious $75,000, one-night fundraising goal. Half the money will go to Gulf Coast recovery, and half will go to Vietnam.

Hua, a member of the parish’s Knights of Columbus chapter, said at least 100 men, women and children volunteered to organize and operate the event.

It touches my heart now to help others – from a place where I can exercise my faith, where I can succeed, and where I can gather with community.”

Two major hurricanes wreaked havoc along the Gulf of Mexico this year. As of Veterans Day, 12 tropical storms and typhoons had devastated parts of Vietnam.

The scene is painfully familiar to most who head the 1,800 families that comprise Queen of Vietnamese Martyrs. They endured killer typhoons in the 1960s and ’70s, as communists invaded.

“Communists took over in 1975, and these people came here because they love freedom and they want to practice their faith,” said Pastor Louis Ha Pham, who escaped Vietnam in 1975 with 350 other members of the Congregation of the Mother Co-redemptrix religious community. “They want to use their freedom and faith to help others who suffer and lack the advantages of everything we have here.”

Co-organizer Hua barely survived a typhoon that slammed into his South Vietnamese village when he was a young child in the 1960s.

As water filled the family’s bamboo hut, Hua escaped with his mother and siblings to a neighboring residence. Water soon rushed into that hut, forcing Hua and other occupants to punch through the roof.

“We’re yelling for our lives in the middle of the night,” Hua recalled.

South Vietnamese soldiers pulled them from the water and onto a boat, but the suffering had only begun when Hua and his family reached dry ground in the mountains.

“You have no clothes, no food, and no fresh water. You have nothing,” Hua said. “So it touches my heart now to help others – from a place where I can exercise my faith, where I can succeed, and where I can gather with community.”

Hua escaped Vietnam by himself as a sophomore in high school in 1975. Communists had killed his father. They had threatened him and his family with machine guns.

“I remember they had us lined up, and my grandfather stood there telling them to shoot him,” Hua said. “He lifted up his dirty white t-shirt and said ‘shoot me. Just do it.’ I’m glad they didn’t, because that would have really messed me up as a child.”

Hua built his American life around Our Lady of Vietnamese Martyrs, thanking God each day for liberties the communists took from his homeland.

“I thank God, and I thank Americans for the opportunity to be here with resources to help people back home,” Hua said. “We thank you Americans so much for helping the Vietnamese to migrate here and live free.”

Que Truong, lead organizer of the event, said all Hurricane recovery is hard. It is worse in a dictatorship.

“It is terrible over there,” Truong said. “In south Vietnam, we are not free to do anything. There, most people are poor. It’s a different story here, so we are very eager to help.”

Joining the Catholic parishioners were Vietnamese dancers and others from Denver’s Nhu Lia Buddhist Temple. Vietnamese from a Baptist church also participated.

“This is the first time we have all sat down and had dinner together,” said parish Vice President Hung Vu. “Refugees of any religion know how it is to have nothing – to have empty hands and empty stomachs.”

Vu’s father starved to death after a typhoon devastated the family’s village in 1978. Communists ruled the family’s church. Everyone in Vu’s life suffered deprivation of basic needs.

At age 8, Vu fled while working on a fishing boat.

“The boat next to ours planned to escape,” Vu recounted. “They waved me over. In an instant, without a moment to think about it, I jumped out and swam to their boat. They pulled me up and we started sailing out of the China Sea.”

The narrow, 35-foot vessel contained 97 “boat people” crammed together in fetal position. They quickly ran out of food and water, finally obtaining supplies from a passing ship.

“We wanted freedom of religion, and opportunity, and were willing to die trying to get it,” Vu said. “We have suffered. Now, we are so blessed to be here in the United States with all we have. We are so thankful for the veterans who have defended this way of life. This church is my family, and this family is blessed to help those trying to recover in Texas, Florida and Vietnam.”