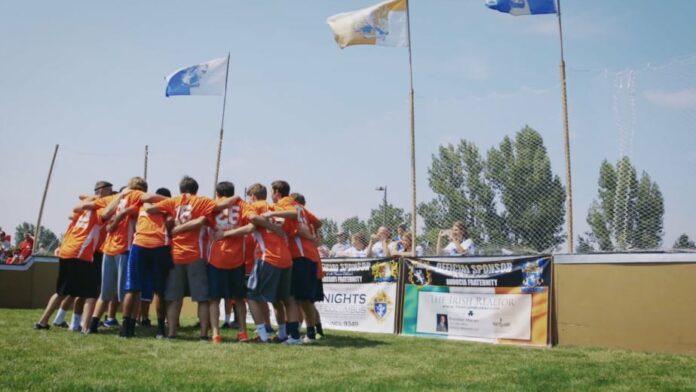 Youth minister Steve Nepil said they weren’t satisfied with the retention and depth of their old youth ministry model. He said their old model centered around trying to entertain teens, which put the Church in competition with smart phones, Call of Duty, and other forms of modern entertainment. The youth ministers were finding it difficult to keep the nights entertaining and still present the deeper truths of the faith.

“We were in a cool opportunity to try something new,” Nepil said.

Now, instead of entertainment nights, Cabrini youth ministry is centered on creating an atmosphere of real relationships, tradition, and a sense of belonging to something greater.

“These are things that the 21st century teenager wants,” Nepil said. “Instead of doing programs, we’re trying to form culture.”

This culture is formed through discipleship. Middle school students are placed into confirmation groups, where older high school students help teach. After confirmation, teens who want to participate in youth ministry are sorted into fraternities and sororities, which are subdivided into individual Bible studies. The Bible studies meet once a week, and the whole youth group gathers for retreats and recreation.

“When a high school kid walks into our youth group, they can say I belong to this young adult who personally mentors me. They very much know where they belong,” Nepil said.

This process has led to an average of one vocation a year from the program, including the former youth minister, Shannon Gunning. Nepil said that they have also seen increased retention of upperclassmen and guys. He said he thinks that much of the success comes from the fact that every Bible study can be adapted to the people in it.

“If you make discipleship a program, it doesn’t work. Mentorship just has to be natural relationships,” Nepil said. “Every group is different. Some will be more ordered to the academic, and some are more interested in hanging out. There’s a social dimension, and then there’s also an academic side. It’s a mix between a relationship and formation.”

Although he said they saw deeper transformation begin with the first Bible studies 10 years ago, it’s only recently that the deeper culture has become an established part of Cabrini youth ministry.

“It’s these houses [sororities and fraternities] that have been around. Their older siblings were a part of them. They get kind of introduced to these fraternities at a younger and younger age. They get to be a part of this thing that they’ve seen since they were little,” Nepil said.

The teens in the program say that their parish isn’t just a place for Sunday worship. Through their fraternities and sororities, they’ve found a community.

Jayden Jones is a sophomore at Denver School of the Arts. She came to Cabrini when she was in sixth grade, and said she is the only person from her school involved in the youth group.

“When I came here, I was definitely kind of scared. You come here and you see that they’re individuals who are interacting in such a way that is so much more communal and so much more respectful and loving. I wanted to be a part of it, but I wasn’t sure how, because I didn’t know anyone,” Jones said.

However, after going through confirmation, she said she found her place in her sorority.

Jones and the other teens also said that being part of an established parish culture helps them navigate high school and evangelize their peers.

“It definitely strengthens me and motivates me to go out and to be braver and to be more joyful, because I have them here, and even if people hate me at school, I have people who know Christ, who love me, regardless. Once people start to see that you’re Catholic and you’re really happy, they’ll start to ask you,” Jones said.

Other members of the youth group said it will help them to evangelize in college.

“I’m so grateful for what I’ve had here, because it taught me in so many ways how to live my faith. Now when I go to college, I can spread that and live it even more,” said Landon Baird, a senior at Heritage High School.

Nepil said that’s the beauty of Cabrini’s discipleship approach to youth ministry: because it requires such commitment, the results are deeper.

“The kids that we win are far deeper in their faith. They have a prayer life, they’ve overcome chastity, they know theology,” Nepil said.

Baird agreed that discipleship is a way of life.

“Community’s great when you’re just at the Church, but if you don’t put it out in the world, it really has no impact. That’s what discipleship is. It brings the faith out into the world,” Baird said.