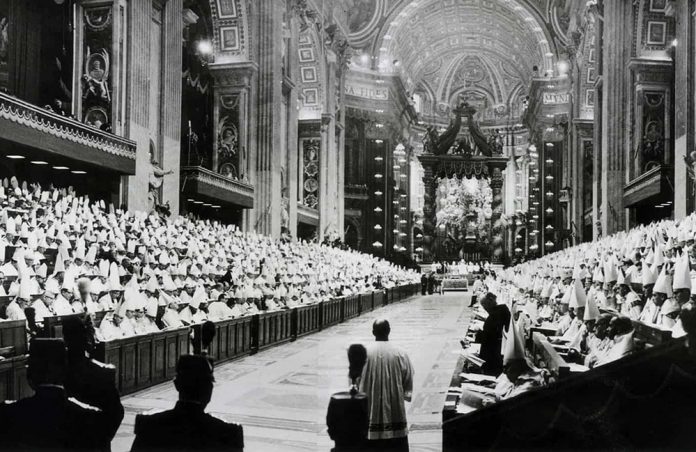 Archbishop Arthur Roche, prefect of the Vatican’s Congregation for Divine Worship, recently sent the world’s bishops instructions regulating local usage of the Traditional Latin Mass. Those instructions were intended to implement Pope Francis’s 2021 motu proprio, Traditionis Custodes (Guardians of the Tradition), which strictly limited the celebration of Mass according to the 1962 Roman Missal. Traditionis Custodes presented itself as a defense of the authority and integrity of the Second Vatican Council — which, it was claimed, was under assault from liturgical traditionalists. In several interviews, Archbishop Roche has emphasized that defending the Council was the rationale for both Traditionis Custodes and his congregation’s detailed regulations.

It is worth asking, however, whether Archbishop Roche’s instructions drastically undercut one of Vatican II’s principal achievements, which was to emphasize and revitalize the authority of the local bishop.

In addition to defining the pope’s infallibility when he teaches on faith and morals under carefully defined circumstances, the First Vatican Council taught that the Roman Pontiff has a “primacy of jurisdiction” that extends to the discipline and governance of the Church throughout the world. This “primary of jurisdiction” is often understood as the high-water mark of “ultramontanism,” the heightened emphasis on supreme papal authority that led enthusiasts like mid-19th century English Catholic publicist W.G. Ward to say that he would “like a new Papal Bull every morning with my Times at breakfast.” As Russell Hittinger has persuasively argued, however, Vatican I’s teaching on the universal jurisdiction of the pope was primarily a response to the modern state’s attempt to subordinate the Church by controlling the bishops. No, said Vatican I: the bishops belong to the Church, not the state, and the universal jurisdiction of the pope is a guarantor of that truth.

Thanks to the Franco-Prussian War, Vatican I ended prematurely, without complementing its teaching on papal authority with a parallel teaching on the authority of bishops. And so, over the next nine decades, an assumed ultramontanism shaped the Catholic imagination: a pyramidal notion of the Church in which the pope, the apex of the pyramid, was considered the Chief Executive Officer of a gigantic global corporation, the bishops being the local office managers. In that image of the Church, all initiative flowed from the top down, and initiatives from the lower levels of the pyramid were discouraged.

Something was wrong here and it had to be fixed. The Second Vatican Council did so.

As no less an authority than Joseph Ratzinger wrote, a decade and a half after the Council, Vatican II “reinserted into the Church as a whole a doctrine of [papal] primacy that was dangerously isolated,” thereby correcting the imbalance in Catholic self-understanding caused in part by Vatican I’s suspension in 1870. Vatican II did this in its Dogmatic Constitution on the Church by teaching that the local bishop is a true vicar of Christ with authority to teach, sanctify and govern in his local Church. Thus, according to the definitive teaching of the Second Vatican Council, the local bishop is no branch manager of Catholicism, Inc., merely executing instructions from Roman headquarters. He has far more authority, and bears far more responsibility, than that.

Yet even when ultramontanism dominated the pre-conciliar Catholic imagination, no one imagined the pope exercising his “universal jurisdiction” by determining the times of Sunday Mass in the parishes of Diocese X, or by moving Pastor A to Parish D in Diocese Y. Papal “universal jurisdiction” was understood to be an extraordinary power, to be exercised locally only when no other remedies were available. Vatican II, for its part, positioned papal primacy inside a more comprehensive and nuanced understanding of authority within the Church, thus refuting the charge — typically heard from anti-Catholic quarters — that Catholics consider the pope both an autocrat who can do whatever he pleases and an oracle whose every utterance bears the teaching authority of the Office of Peter.

Archbishop Roche’s instructions, issued with Pope Francis’s approval, seem to strip local bishops of considerable authority over diocesan liturgical life, to the point of descending into minutiae by defining which Mass schedules may be printed in parish bulletins. The irony is that such overbearing micro-management comes perilously close to undercutting the teaching on episcopal authority laid down by the very council Traditionis Custodes and Archbishop Roche claim to defend.

Beyond the ironies in this particular fire, though, one must hope that such goings-on do not tarnish one of Vatican II’s great accomplishments, in aid of a new progressive Catholic ultramontanism that, having failed to persuade, now opts to exercise the clenched fist.