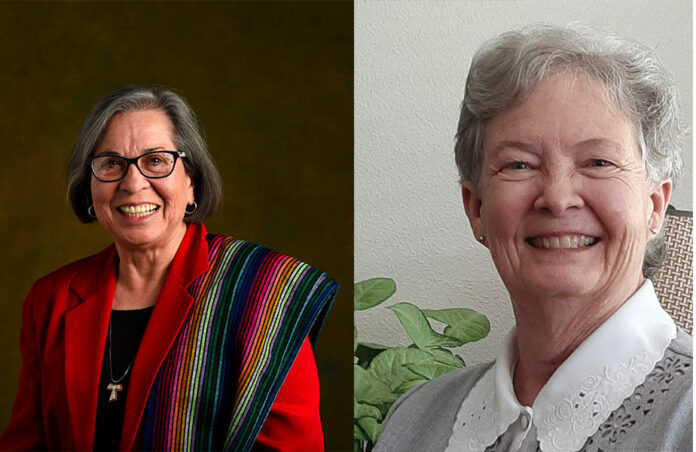 This year, the Sisters of St. Francis of Penance and Christian Charity (Marycrest) are celebrating the 40th jubilee of Sister Leandra Schaller and the anniversary of Sister Alicia Cuarón taking her final Profession of Vows.

A native of St. Louis, Mo., Sister Schaller is the daughter of the late Leona Lankau Schaller and Charles Schaller. After attending Northern Arizona University and Fontbonne University, Sister Schaller earned her Doctorate at the University of Missouri before entering the community in 1977. She began teaching at NAU in 1970 and retired from teaching in 2013.  She served 29 years at several schools in the Denver area which included Regis Jesuit, Mullen, and Holy Family High Schools. Her fields of service were science, math and guidance and counseling.

Her favorite parts of religious life are prayer, private and in community, service and mutual support. Her hobbies include camping, reading and piano.  When she was completing her dissertation at the University of Missouri, Columbia, a sister from the community was campus minister.  She first thought of being a sister in the sixth grade. As the years rolled by, she continued her education and it was not until meeting this sister that she began to pursue the idea of Religious Life in earnest.

“God has a way of accepting us and loving us where we are, and God’s time is not always ours,” she said.

Alicia Valladolid Cuarón was born on March 1, 1939 in Oxnard, California. Her parents, Rosendo Alfaro and Guadalupe Valladolid (Pérez) had immigrated to the United States from Mexico during the time of the Cristero movement. She grew up in El Paso, Texas with her five siblings, four sisters and a brother.

Alicia moved to Colorado in the early 1970s. In 1972, she earned her M.A. in education from the University of Texas at El Paso and an Ed.D. at the University of Northern Colorado in1975. She was very successful in her career, got married and had a daughter Alexis Cuarón Anderten, but in 1992 she made a decision that changed her life.

“I had accomplished a lot professionally, more than I ever thought possible, but I felt a need to re-examine the direction my life was taking,” Sister Cuarón said. “The idea of entering a religious community had never entered my mind, but when God called, I answered ‘Here I am Lord, You have called me’ and I made the decision at the age of 53 to enter The Sisters of St Francis of Penance and Christian Charity.”

In 2004, Sister Cuarón moved the Bienestar Family Center to Centro San Juan Diego, the Hispanic ministry of the Archdiocese of Denver. She served as director of Bienestar from 2004 to 2014. Based on her upbringing as a first generation Mexican-American, Sister Cuarón’s life-long mission has focused on the empowerment of Spanish speaking immigrants and women. This mission has been her spiritual and personal priority. To further advance the mission, Sister Cuarón and Centro San Juan Diego partnered to establish The Sister Alicia Cuarón Education Fund. This fund will continue her legacy of providing educational programs and services for Spanish-speaking immigrant families.