His Church. Our Experience.
Subscribe
HomeLocalTrying out a new habit
Local

Trying out a new habit 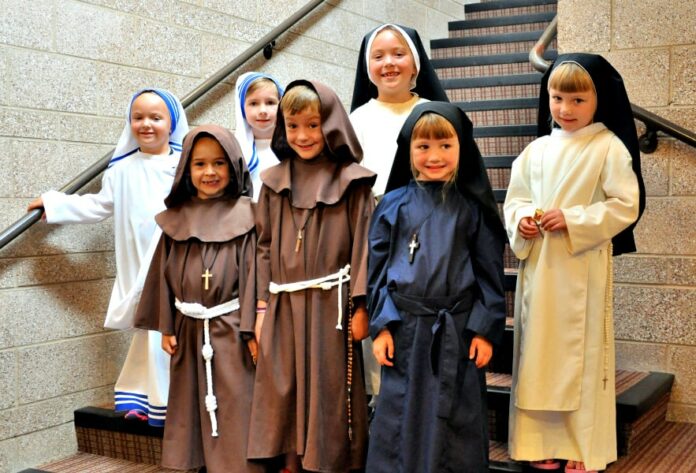 Little versions of a Franciscan brother and Dominican nun walked before a crowd of young people gathered in a church, tugging at their white habits or adjusting their brown robes.

For many of the children at Our Lady of Loreto Church in Foxfield last week, it was the first time they had seen a religious brother or sister and wore a habit.

“I think the habit is really comfortable,” said 7-year-old Sydney Shivar, who wore a Dominican-style cream habit and black veil before the group.

More than a time for dress-up, youth leaders organized the religious vocations presentation with religious brothers and sisters as an extension of the summer youth program Totus Tuus to acquaint children with another way of life dedicated to Christ and service of others.

“One of the things we’re trying to point to is it’s not just a job, it’s a life, a life given to God,” said seminarian Daniel Ciucci, who directed Totus Tuus in the Archdiocese of Denver this year. “A habit, with all its symbolism, points to a great charity, a great act of self-gift.”

In previous years of Totus Tuus, Latin for “totally yours,” held at parishes across the nation, priestly vocations were emphasized to children, yet there wasn’t a presentation about religious vocations, especially for women, Ciucci said.

Our Lady of Loreto parishioners, parents and Totus Tuus leaders wanted to give a message that all are called to holiness and a particular vocation.

It takes a community, primarily the family, to assist a child to discover their vocation, said pastor Msgr. Edward Buelt.

“The most important community out of which vocations come is the family,” he said. “A school and a parish’s only role is to assist the family in drawing that out of the child.”

And exposure at a young age is key, he added, when children are quickly learning and may be discovering a call from God.

“There is never an age at which we should not be … drawing out of them their vocation that has already been instilled in them from their mother’s womb,” Msgr. Buelt said.

A group of 12 parent and parishioner volunteers and an anonymous donor made a vision a reality when they sewed and made 28 religious habits to make religious vocations more tangible.

With the leadership and vision of parishioner Katherine Dorsey, nine women worked together to sew and assemble the habits for the June 26 presentation.

“It makes it much more real to them,” said Jane Eusterman, one of the volunteers.

She said the volunteers all prayed while making the habits in hopes that vocations would be realized.

“It’s not just a fun effort—it’s praying that these seeds would be planted here,” she said.

Eusterman and volunteers also asked religious from various orders to speak to the children about what led them to their vocation.

Capuchin Franciscan Brother Anthony Monahan of San Antonio Friary in Denver, who recently made a lifetime profession, told the youths about his vocation.

“I’m here today, because I was called by God,” he said.

“Our happiness lies in finding what it is that the Lord is asking of us for our life,” she said, “and then we know why we were created to love him and love one another.”

Msgr. Buelt also shared his own discovery of his vocation. As a child he felt unloved but realized Christ’s own love for him.

“I wanted to give my life back to (Christ) and the only way I knew how was to be a priest. I decided early on I was going to give my life for you all so you all could have life in Jesus,” he shared with the group.

After the presentation, 7-year-old Aiden Segovia, who wore a Franciscan habit, said that he could “wear this every day.”

Totus Tuus leaders who helped with the presentation said the children were excited to see the religious and try on the habits.

“Being exposed to (religious life) is the first step,” said Summer Swisher, 21.

Tips for fostering vocations
Religious sisters, brothers and youth leaders offered tips for families on how to give support for vocations.