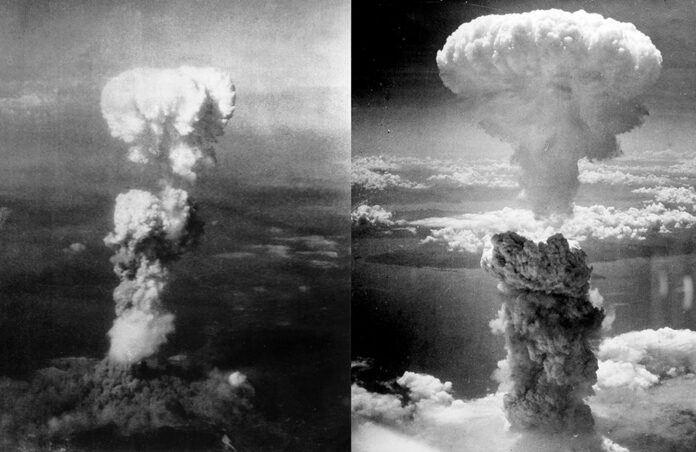 Three U.S. Navy officers look out at me from a small, black-and-white snapshot, taken in Sasebo, Japan, on September 26, 1945: three and a half weeks after the Japanese Empire’s formal surrender aboard USS Missouri. These young Americans, assigned to an amphibious flotilla of landing craft, had spent the previous months on Okinawa, preparing to invade Dai Nippon. Given the carnage they had just witnessed on Okinawa, which was expected to be far worse when they led the seaborne invasion of Japan’s home islands, it’s not hard to imagine those three officers marveling that they were still alive, much less standing undisturbed at a major base of the Imperial Japanese Navy.

The officer on the far right of the photo is my father, LTJG George S. Weigel, USNR.

Other snapshots in an album I’ve recently rediscovered are striking. They show Japanese submarines; an enormous drydock; impressed Korean laborers lined up on a pier for repatriation to their homeland; two Japanese aircraft carriers abandoned at a late stage of construction; a bus fueled by a rear-mounted charcoal burner. Then there are the pictures of Japanese civilians: adults queueing at a railroad station, pushing carts through the streets, boarding a bus, riding bicycles; children on a playground.

The Japanese images are especially thought-provoking. Because, like my father and his two brother officers, those civilians would likely have been killed, had World War II in the Pacific not ended when it did and how it did. So would the 81,556 Allied prisoners of war in Japan, China, and Southeast Asia, who, by order of the Japanese high command, were to be murdered rather than released.

As D.M. Giangreco demonstrates from Japanese records in Hell to Pay: Operation Downfall and the Invasion of Japan, 1945-47, the militarist-nationalist fanatics who dominated Japanese policy until Emperor Hirohito’s decisive intervention in August 1945 planned to turn the entire Japanese population into combatants during an American invasion. Elderly men and young boys, women and children – all were to resist with whatever tools were at hand, fighting alongside the still-formidable Japanese army and supported by kamikaze pilots, suicide speed boats, and human torpedoes.

Original American estimates of Japanese homeland casualties during Operation Olympic (the invasion of Kyushu scheduled for November 1945) and Operation Coronet (the invasion of the Tokyo Plain in March 1946) ranged from five to 10 million; some later estimates put the anticipated death toll at 20 million, including perhaps 10 million who would die of starvation as food supplies evaporated during the fighting. American combat deaths, projected from the slaughter on Okinawa, were expected to be no less than 500,000 and perhaps as many as a million, out of a total American casualty projection of two to five million.

In the summer of 1945, President Harry Truman had three options for ending the Pacific War without the unprecedented bloodletting of an invasion. The first was to step up the fire-bombing of Japanese cities, which had already killed hundreds of thousands and would, if continued, kill hundreds of thousands more. The second was to strangle Japan by naval blockade and starve her into a submission her leaders might not concede until millions, and perhaps tens of millions, were dead. The third was to use the atomic weapons developed by the Manhattan Project to stun Japanese politicians into recognizing that the entire nation would be destroyed if they did not constrain their militarists, acknowledge defeat, and capitulate.

President Truman chose the third alternative. In doing so, he saved millions, even tens of millions, of lives, American and Japanese.

Does that make Harry Truman a moral monster, the equivalent of Stalin, Hitler, and the Japanese militarists who killed millions of innocent Chinese in a war that began in 1937? No, it does not. Truman authorized the use of the atomic bombs thinking, rightly, that doing so would save American and Japanese lives by shocking Japan into surrender.

It was a terrible choice, what Secretary of War Henry Stimson called “our least abhorrent choice.” Given the available options, it was the correct choice.